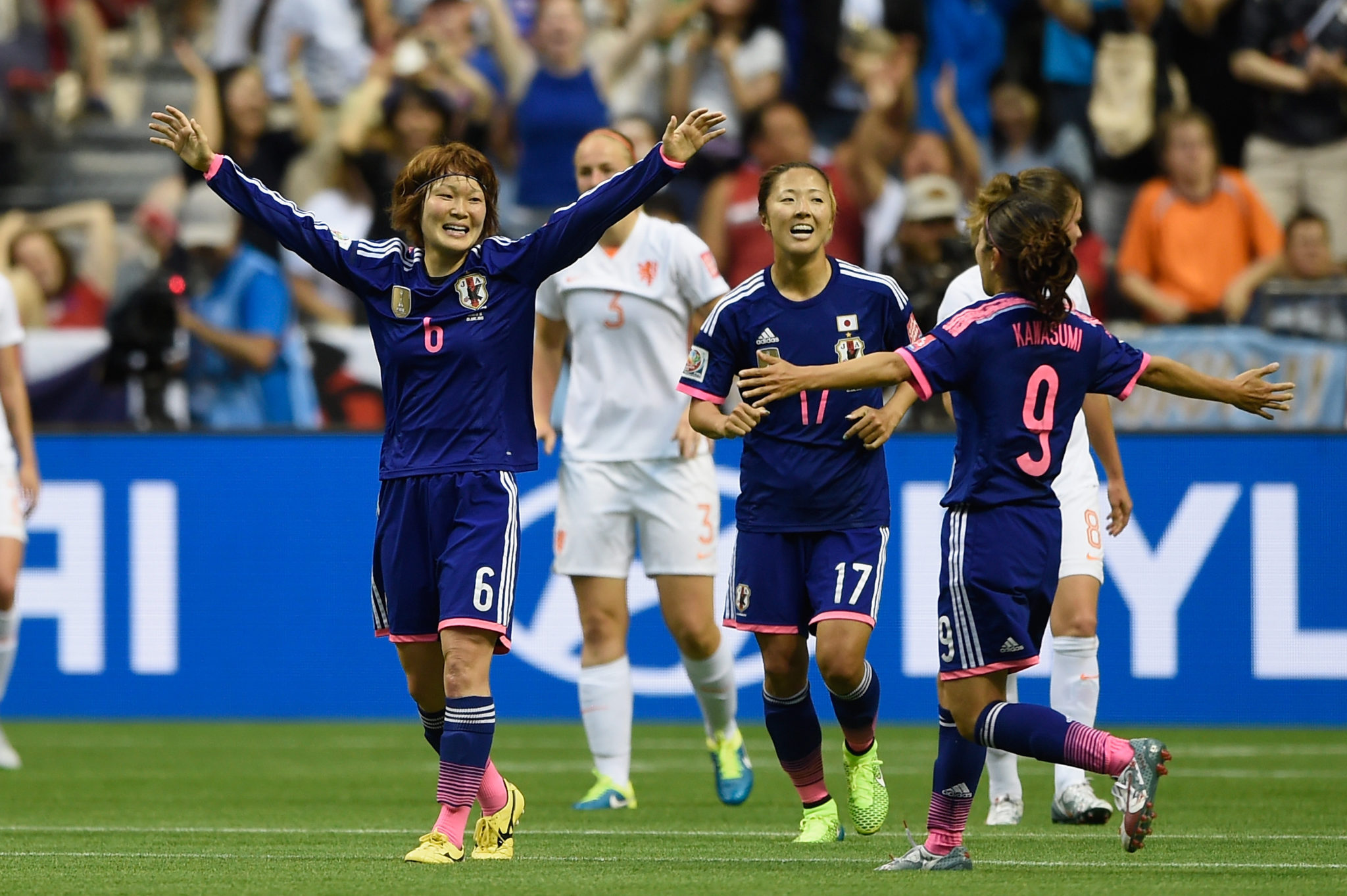 Vancouver, B.C – Japan showed once again why they are the defending World Cup Champions, controlling their match against the Netherlands from start to finish in a 2-1 victory in front of of 28,717 fans at BC Place that sends them to the quarterfinals of the Women’s World Cup.

Netherlands created few opportunities and failed to convert when they had chances. Japan’s depth and winning mentality was too strong on the day. The quarterfinal matches are all set. Japan will face a familiar opponent, Australia, on Saturday in Edmonton, Alberta.

Mizuho Sakaguchi scored the game-winning goal on Tuesday in a masterclass team effort by Japan:

Saori Ariyoshi opened the scoring for Japan in the 10th minute, collecting the ball after a poor clearance from the Dutch following a shot that caressed the crossbar.

Yuki Ogimi had a fantastic match for the Nadeshiko and looks forward to playing the Aussies.

“It’s easy and at the same time very difficult to face. We haven’t lost against Australia for a couple of matches so we can take advantage of that.”

Japan and Australia have a long rivalry and a history of close matches with each other. Both teams know each other very well. There will be no secrets or upper hand between the Asian Football Confederation foes. Japan coach Norio Sasaki briefly touched on playing The Matildas in the quarterfinals.

“There a completely different team, technically superior,” he said. “I must say they have great potential. We need to make sure we play well.”

Ariyoshi got things going with a clutch goal 10 minutes into the match. Japan followed that tally with a brilliant goal from Sakaguchi after a mesmerizing team buildup. Kirsten van de Ven scored off the bench for the second match in a row when Ayumi Kaihori committed a huge howler in handling the Dutch’s strikers header on target. The late marker by Holland added some excitement to the final two minutes of stoppage time. Sasaki was almost apologetic afterwards.

“The tactics in the day worked. I’m sorry to say we left you in suspense,” he said.

Center back Mandy van den Berg summed up her team’s play citing patient, and a more calmer approach as for reasons why the Netherlands weren’t able to topple Japan.

“I think the decisions we made were a little too quick,” she said. “Sometimes we have to have a little bit more patience. In the end we gave everything. I think we played very well and a very big compliment for the whole team.”

The Netherlands had their chances in the early moments of the match. Manon Melis had a glorious 1-v-1 opportunity with Japanese goalkeeper Ayumi Kaihori after being sent in on a terrific through ball. The Netherlands’ all-time leading goalscorer tripped over the ball and failed to get a shot on target. The Melis miss would be costly as Japan scored moments later.

Netherlands coach Roger Reijners was happy for the experience his young team was able to take in at the World Cup. The end result may not have been what they would have liked, but the overall journey is something his team can build on going forward. Reijners is under contract for 2016 and vows to get his team ready for what will be an important race to qualify for the 2016 Rio Olympics. The Netherlands will take part in a four-team playoff next year with Sweden, Norway and Switzerland.

“I think we had a great start until it became 1-0,” he said. “I think our team did everything we possibly could. It didn’t bring us what we were looking for. I’m really proud of my team for the way they played in the biggest tournament. In this point, obviously we’re disappointed.”

“Yeah most of all, of course we are very disappointed that we are out of the tournament,” she said. “If I look at the whole tournament for the whole team it was a great experience, it was amazing to be here to meet all these strong opponents. To play on the highest level, so many people, great stadiums. It was absolutely amazing.”

Japan looked extremely dynamic and on point in the first half with terrific passing and brilliant ball control. The quick Japanese counter-attacking style of play outmatched the Netherlands. The patience Japan had created scoring opportunities, and 53 percent possession in the first half. The Netherlands had trouble getting the ball back and moving up the pitch. Service to Melis, Vivianne Miedema and Lieke Martens was poor and not threatening towards the back line of Japan.

The Netherlands failed to score off a corner in the second half when Sherida Spitse sent in a ball that was deflected off Japanese defender Aya Sameshima. Goalkeeper Ayumi Kaihori was alert and knocked the ball out of danger. Once again, the Netherlands missed a glorious chance to score and Japan came back the other way and scored what could be the goal of the tournament.

The build up was sublime. Ogimi played a back-heel to Miyama. The skipper played a lovely ball that was used as a dummy from Mana Iwabuchi and it went through to Sakaguchi, who guided the ball past Loes Geurts and put Japan in the driver’s seat for a trip to the quarterfinals.

Japan didn’t quite manage to play a completely clean match. Kaihori will be on highlight blooper reels after committing a terrible blunder in net in stoppage time. Kirsten Van De Ven’s header was sent towards the body of Kaihori and instead of saving the harmless shot, the 28-year-old waved at the ball and watched it go past her in horror. Ogimi talked about what the team was thinking after the indecision from Kaihori.

“It was a difficult time where she needed to determine whether she needs to hold the ball or catch it,” she said. “Things like that can’t happen in a match, but I think it was very difficult.”

But too little time remained for the Netherlands to take full advantage and complete the comeback. Japan was able to earn the win, but goalkeeping could be a weak spot. Erina Yamane is dealing with a minor shoulder dislocation, and Kaihori could now lose her spot in net.