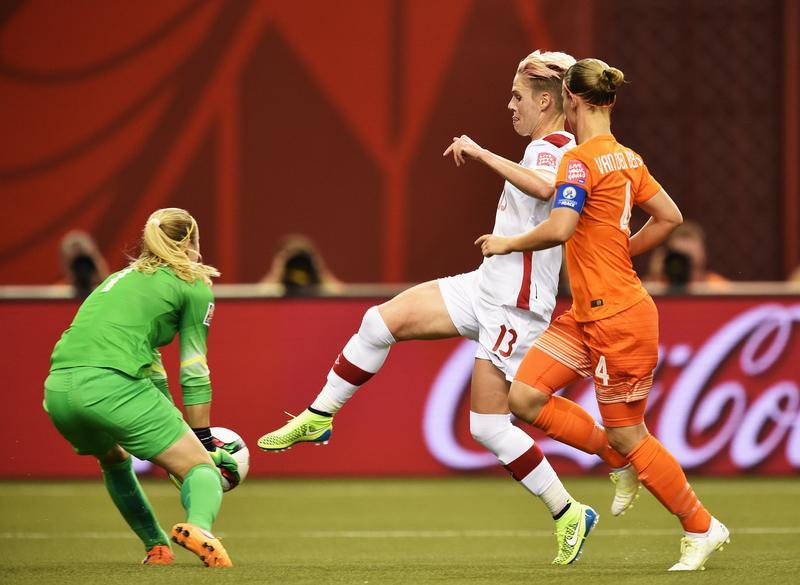 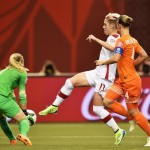 Vancouver, B.C – The Netherlands will be facing a monumental challenge on Tuesday night vs Japan in the final round of sixteen matchup. Holland has struggled to scores goals and show the wave of offense that helped them earn a spot at the World Cup. Kirsten Van De Ven’s 87th minute goal against Canada rescued the Dutch and placed them among the four best third place teams after the Group Stage.

Against Japan, the Netherlands won’t be able to switch off for any stretches of the match. The technical ability the Japanese team possess puts them at another level. The fitness level, endurance, mindset, and overall understanding of team concepts is a big reason why Japan is a strong contender to repeat as World Cup Champions. Goalkeeper Loes Geurts played against Canada and has fully recovered from an earlier ankle ligament injury. She described what she expects to see from Japan.

“Yeah really technical and fast, they play really well together. I think we can expect a fast play from them. They’re very fit also, so they’ll probably be going for 90 minutes and even more minutes, going, going, going. We need to be on top against them.”

Coach Roger Reijners and the Netherlands can potentially look forward and gain confidence with the fact that Japan did not play at their highest level during the Group Stage. Japan claimed narrow 1-0, 2-1, and 1-0 Group C victories over Switzerland, Cameroon and Ecuador respectively. While only giving up one goal, Japan was expected to run away and destroy the competition in Group C. With the low scoring that the Netherlands have also shown, does the 29 year-old Loes Geurts expecting to see a low scoring match?

“Could be. They haven’t scored so much either. We haven’t scored much, we haven’t conceded much so it could be, but maybe the tables turn and we both score and we score a little bit more hopefully.”

Geurts made her debut with the senior national team on August 20, 2005 and was quickly appointed as the number one keeper in 2006. Her take-charge influence is a role she is more than comfortable showing as she helps out the defenders in front of her. Japan is a sublime set piece machine that can pick teams apart. Geurts is confident that her communication with center backs Mandy Van Den Berg and Stefanie Van Der Gragt will be exactly on point during corners, free kicks, throw-ins and counter-attacks.

The Göteborg FC Swedish Damallsvenskan keeper watched from the sidelines as the Netherlands were run off the pitch against China in their second match, a 1-0 loss on Thursday, June 11 in Edmonton. China is a compact team that rely on ball possession and a strict formulated tactical game plan. They controlled the match and left little room for the Netherlands to get going. Japan will look to do that as well, but at a completely advanced level than what China was capable of. In order to upset Japan, the Netherlands will have to play smart, together, and patient football. Japan will run Holland ragged if the Orange aren’t careful in the energy they use. The former Western Illinois keeper shares those thoughts.

“Yeah that’s important, especially because it saves a lot of energy if you have the ball. We can have positive energy if we have the ball. If we stay together as a team, I’m sure we don’t get run off the field again.”

Vancouver has a strong Japanese community and Japan supporters are expected to fill BC Place to cheer on Norio Sasaki’s squad. The pro Japanese crowd should provide and added boost and home feeling advantage for a Japan team that enjoys playing in Vancouver. The Netherlands are no strangers to being unpopular at the World Cup. 45,420 spectators filled Olympic Stadium in Montreal to support Canada. Weathering the early stages vs Japan will be key for Holland. Loes Geurts isn’t bothered by what could very well be a vocal contingent of Japanese supporters.

“Yeah, well we have had the same against Canada. We have experience now and also with the fast goal against. I think we just need to have the focus on ourselves and be patient. Even if we concede a goal early, no matter what happens. If we score early, if we don’t score until the 90 minute, whatever happens we just need to stay with ourselves and have the patience, and trust in confidence that we can do something good.”

The round of sixteen has offered up great matches from coast to coast. Japan will be favoured vs Netherlands, but with the way the Group Stage was played out anything is possible. An organized Holland could very much eliminate the holders. Tuesday night could be the night Melis, Miedema, and Martens finally fill the back of with net with Loes Geurts leading the Netherlands to victory.

US preps for quarterfinal without Rapinoe, Holiday
Abby Wambach apologizes for criticizing referee