Round of 16 game preview – Norway vs England 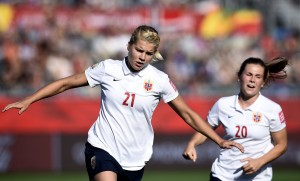 Key Players:
Norway – Ada Hegerberg: At only 19, it is a lot to put on her shoulders to say Hegerberg’s ability to score will be paramount to Norway’s chances for a deep run.  But there is little doubt the teenager is the best finisher in the team and a key component in this one…Trine Ronning and Solveig Gulbrandsen are both at the other edge of the age spectrum (33 and 34, respectively) and are still major contributors with Ronning helping to hold things together in back and Gulbrandsen a factor in the attack whether starting or off the bench.
England – Karen Carney: Her insertion into the match against Mexico in the middle group match turned the tide of the World Cup for England who finally scored after 160 minutes being kept off the board.  She makes the midfield tick… …Laura Bassett will again be vital to the defensive effort against a Norway side that can get forward quickly.

Under The Radar Players:
Norway – Elise Thorsnes: Came off the bench in the first two group games and both times Norway got better.  Thorsnes started against Ivory Coast but it would not be a surprise to see her substitute roll revised on Monday.
England – Eniola Aluko/Alex Greenwood: Aluko was poor against Mexico, playing with little confidence in her touch.  After that she did not get off the bench against Colombia.  Greenwood was good off the bench against Mexico and earned the start against Colombia.

Inside the Numbers:
2-0 — That was the score the only other time Norway and England faced off in a World Cup match.  That was June 8, 1995–20 years and two weeks ago.  Despite the loss, both teams qualified for the quarterfinals.  England lost to Germany in the quarterfinals and have still still never won a knockout match at a World Cup.  Norway won the 1995 World Cup.
Random Stat: England have never beaten another European team in a World Cup match.  They are 0-2-2 including a draw in the 2011 quarterfinals against France that they ultimately lost on penalty kicks.

Breaking it Down:
England seem to have grown into the tournament after they opened by sitting back and allowing France to dictate their entire opening match.  They should look to be aggressive again by playing through Karen Carney and the outside backs getting forward.  Norway had two soft group matches and an encounter with Germany in which they hung in after being dominated in the first half, got hold of the match, and finished 1-1.  This one could be decided by how effectively England can control possession through the heart of the midfield.