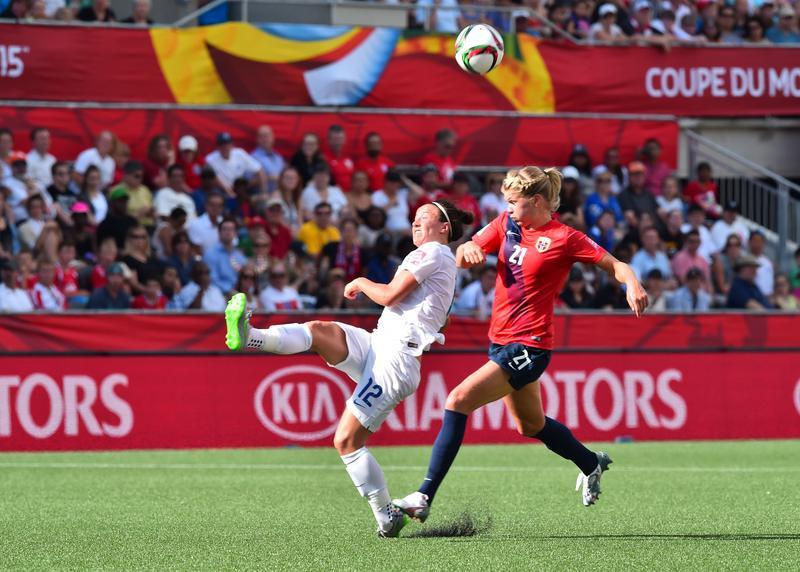 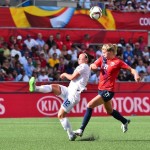 Lucy Bronze scored in the 76th minute to lift England to a come-from-behind, 2-1 victory over Norway to earn a trip west to Vancouver for a quarterfinal showdown against host Canada.  The quarterfinals match the deepest the English women have ever advanced at a World Cup but the match win was their first in a knockout round and their first at a World Cup over a European side.  Norway’s loss sends Germany and France into next year’s Olympic Games and Even Pellerud’s side will need Japan to beat the Netherlands on Tuesday to maintain a chance to join them. (England do not field an Olympic team.)

Norway came out the stronger side and had the lion’s share of possession against the Lionesses during the first half.  They seemed quicker to the ball and won it back almost immediately each time England touched it.  What Norway could not produce in the opening 45, was a goal.

Early in the second half that changed after England keeper Karen Bardsley, who played an extraordinary match, made her lone blunder when she knocked an errant shot out for a Norway corner kick.  Mark Sampson then rolled the dice with a substitution and Norway struck on the corner.  Lene Mykjaland drove it to the near post and Solveig Gulbrandsen took a blind flick that went off the bottom of the cross bar and in.

Down a goal, England bore down and found their best soccer.  A few ticks beyond an hour Fara Williams sent a corner kick to the far post where Steph Houghton returned it to the opposite post to level the match.  Gulbrandsen had been guarding the near post but slid central once the corner kick looped over her head and Houghton utilized the vacated space.

The match winner was crafted by some right-sided possession and with no defensive urgency from Norway, Bronze slipped into the play and was given a pass outside the right corner of the penalty box.  Bronze cracked it high and beat Ingrid Hjelmseth.  It was England’s second shot on goal of the day and their second goal.

Norway were unable to find much late magic and made several tactical mistakes that allowed England an easier time seeing out the match and their cross-country trip for what will be a high-energy quarterfinal against Canada.