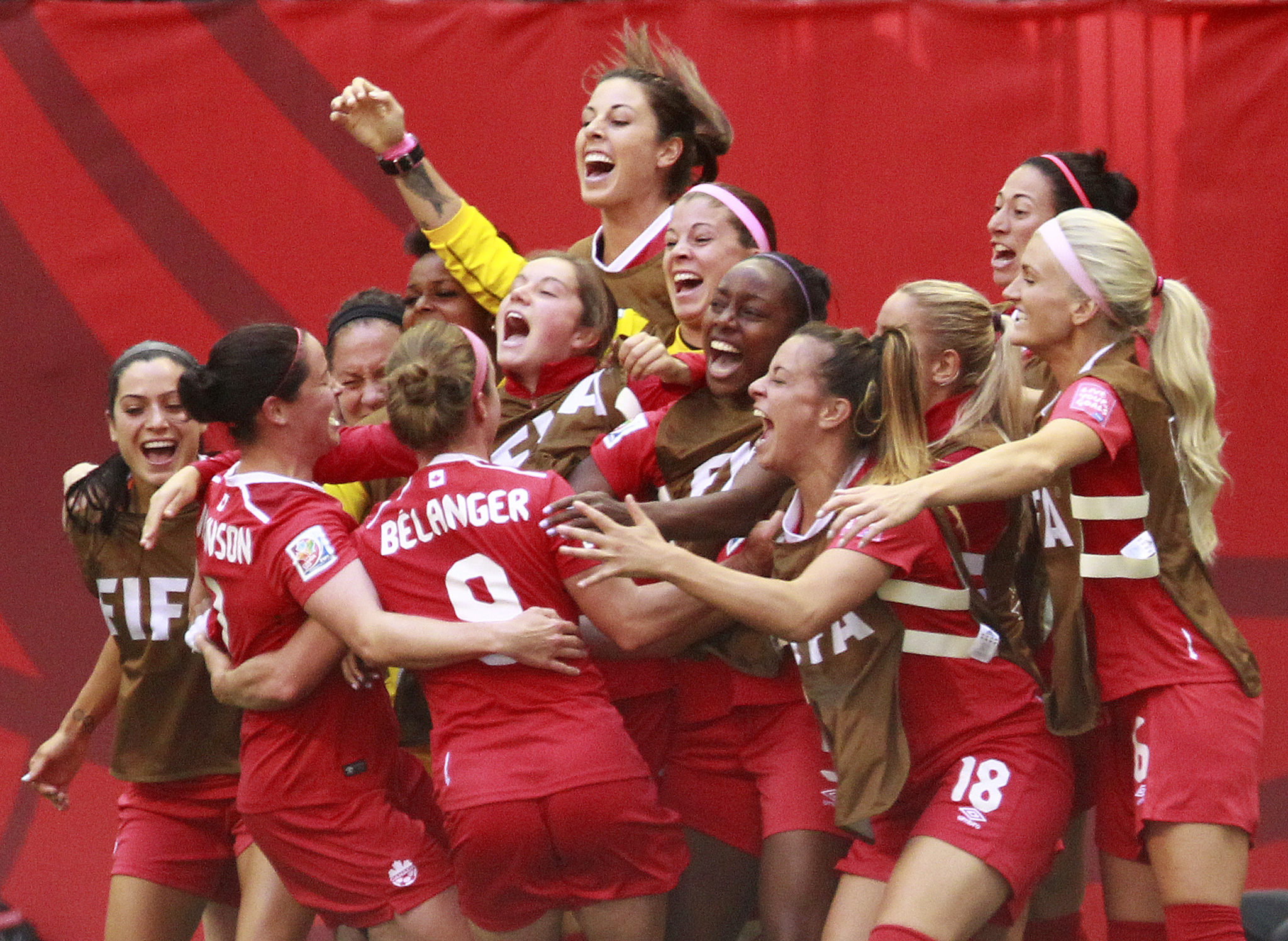 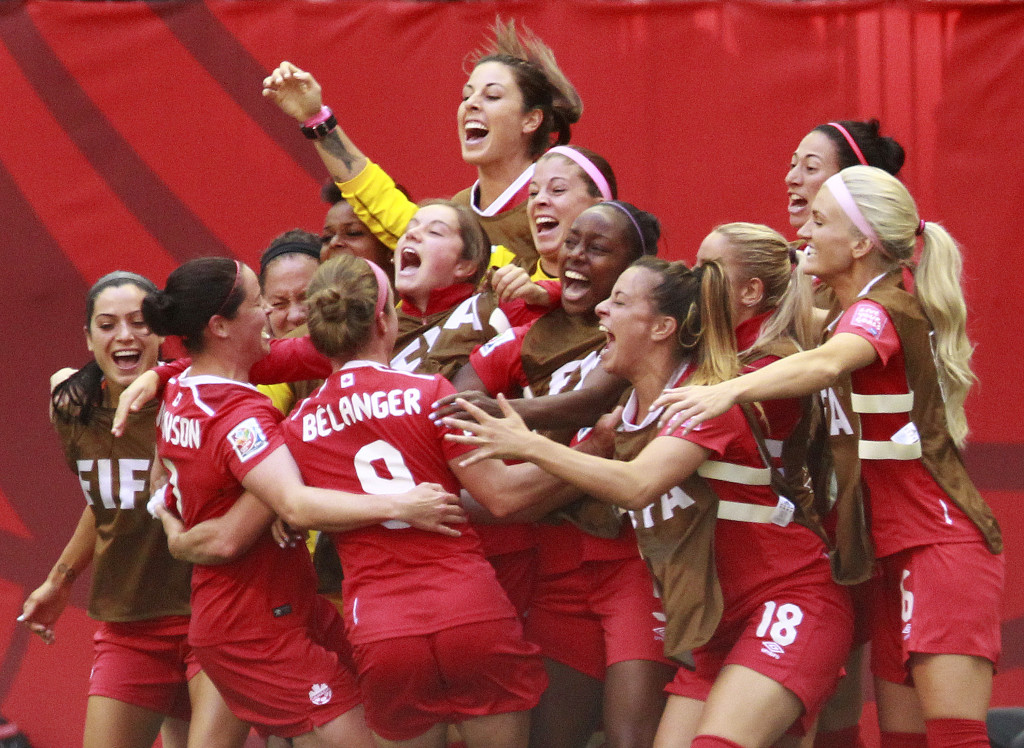 VANCOUVER, British Columbia — Canada is headed to the quarterfinals of the 2015 Women’s World Cup after defeating Switzerland, 1-0 on Sunday at BC Place.

The hosts had the backing and support of 53,855 fans cheering them towards a victory. Josee Belanger scored her first goal for her country since December 2010 as Canada held on for the win. Canada will now play the winner of Norway vs. England game in the quarterfinals on Saturday, right back in Vancouver.

“It feels pretty incredible to have that many Canadian fans,” Canada goalkeeper Erin McLeod said. “It’s always an honor. I was pretty pumped. I was kind of embarrassed that I self-cheered so much during the game. Overall I’m really proud with the way the team performed, especially in the second half. We played like the Canada we know and we’re going to show a lot more during the tournament.”

Canada coach John Herdman’s team started off slow and played tentative in the first half. A team talk during the interval sparked Canada and helped the hosts show the true form they have. Herdman was delighted with the performance his team put forth in a win-or-go-home situation.

Canada could have a date with old coach Even Pellerud in the quarterfinals if Norway advances, but Canada captain Christine Sinclair says she has no preference as to who the team’s next opponent will be.

“Not really,” she said. “We’ve played England so often. Obviously most recently before this tournament started. In your heart it would be cool to play Even. Personally he had a huge impact on me. It would be nice to share that experience with him. I think we’re just going to sit back and watch them kick each other tomorrow (laughs).”

Herdman’s halftime speech appears to have made a difference for Canada.

“He told us these are moments we’ll never get back and no regrets at the end of it,” Sinclair said.

The Swiss were not intimidated by the strong physical nature of Canada. Forwards Ramona Bachmann and Lara Dickenmann were able to set up a pair of early chances for Switzerland, the first after Bachmann raced past a sliding Sesselmann, but ran out of pitch length. The FC Rosengard striker also sent in a cross that Dickenmann was a tad late to reach. Canada’s backline was tested and came through in the early stages of the match.

Belanger moved to her more comfortable position up top as a striker next to Melissa Tancredi and Christine Sinclair. In the 52nd minute, Belanger fired a long-range shot from distance that appeared to be harmless, but somehow found the inside of the back far post. For Belanger, that was her second crossbar or post of the tournament as scoring seems to elude Canada.

Moments later, Tancredi looked to connect with a cross, but instead took out Swiss goalkeeper Gaelle Thalmann. The 29-year-old keeper took an elbow to the ribs and was able to continue on after being attended to by team trainers.

Both teams settled into the remainder of the opening forty-five playing as though they were afraid to make a mistake. At times it looked like Canada had no imagination going forward. Bachmann was free to run all over the pitch as she turned Sesselmann inside out on a few occasions. Switzerland came to play and had Canada on the defensive. The first half ended 0-0 with both Canada and Switzerland struggling to find finishing in the final third.

Herdman and Swiss coach Martina Voss-Tecklenburg both elected not to make any changes before the second half kickoff. Canada got things going with more urgency, possession and control to their game.

Herdman revealed after the game that defender Kadeisha Buchanan was questionable to play against Switzerland. The tough tackling center back has missed training this week with an abdominal muscle injury. Buchanan’s role as a shutdown defender is vital to the success of Canada. She talked about how she was able to get fit for the match and the state of her injury.

“I only missed one session out of the three so I felt like I knew my role,” Buchanan said. “It was pretty easy to get back out there when you know your role. I felt confident two practices before. It’s pretty sore right now. I’m just going to go back to the hotel and rest it up and get better for the next game.”

Rhian Wilkinson was back in the lineup at right back sent a cross into the box for Tancredi to connect with. The ball was too far in front for Tancredi and well over the head of Thalmann. Canada kept coming and once again it was Wilkinson who setup the play that lead to Canada’s opening goal in the 52nd minute.

Wilkinson’s cross found Sinclair in the box. Sinclair, with defenders all over her, played a little touch to Belanger. The recently converted fullback was wide open and had a split moment to find her shot. Belanger sent a left-footed, curling shot past the Swiss keeper for a 1-0 Canada advantage and chorus of cheers from the BC Place faithful.

Bachmann was trying to do everything possible to find an equalizing goal for her team, but it just wasn’t in the cards for Switzerland. Canada’s back-line shaky at time was able to do enough to earn the victory. Erin McLeod wasn’t tested often enough, but did well on corners and crosses to deny the Swiss. McLeod earned her third clean sheet of the tournament.

Voss-Tecklenburg expected a strong physical match from Canada and that’s exactly how it played out. Canada was able to finish one particular chance, while Switzerland couldn’t convert. Overall, the Swiss have done quite well in their first time at a Women’s World Cup.

“It was a highly intensive match, exactly what we expected,” Voss-Tecklenburg said. ‘I feel badly for my players. We’re sad, they are sad. This World Cup has been a huge experience for us.”

France set Germany clash with blow out of Korea
Three things learned: Belanger proving her worth