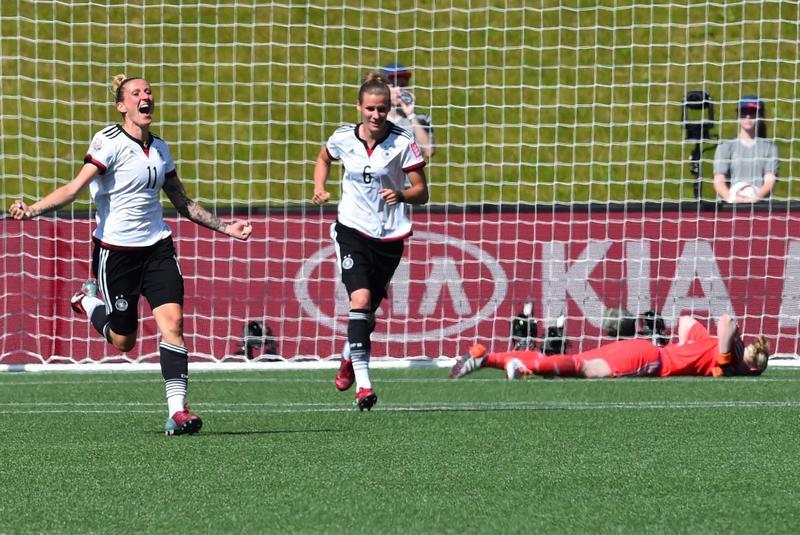 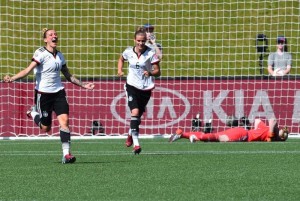 Anja Mittag (11) celebrates her goal against Sweden. It was Mittag’s 5th of the World Cup. (Getty Images)

Germany booked a place in the World Cup quarterfinals for the seventh time in as many appearances with a 4-1 thrashing of Sweden.

Anja Mittag and Celia Sasic, who both recorded hat tricks in the tournament opener against Ivory Coast, scored a goal and a brace respectively move into a joint lead for most goals at the World Cup with five. Linda Sembrant scored a late one for Sweden and Dzsenifer Marozsan rounded out the scoring for Germany. The loss means that Sweden–who drew all three group matches and will leave Canada winless–will need three European teams to lose in this round (not including England) to have a chance at qualifying for the next summer’s Olympic Games.

Germany were the more aggressive side from the opening whistle at Lansdowne Stadium in Ottawa and they won a scoring chance after only 14 seconds. Perhaps it was too soon even for Alexandra Popp who fired the shot well over the crossbar. Germany continued to fire away at the Swedish defense over the opening minutes before the match settled down a bit. But just as things were settling down Germany went ahead.

Sweden was knocking the ball around in back trying to get forward when Mittag created a turnover in midfield. Never missing a beat she laid it off for Sasic and continued forward for the return pass. Taking it in stride Mittag found space just above the Sweden back line and blasted the opening goal of the game off the inside of Hedvig Lindahl’s left post.

Sweden then made a fatal defensive mistake that led to a Germany penalty kick in the 36th minute. Mittag won position against Amanda Ilestedt and was between the defender and the ball as she received a cross from the right side. After taking one touch Mittag was brought down leading to a yellow card on Ilestedt and a penalty which Sasic converted.

[MORE: China holds off debutantes Cameroon to return to quarterfinals]

The halftime script almost needed a rewrite when Lotta Schelin, delivered a superb, back post cross to Sofia Jakobsson, but the 25-year old striker got under the ball and sent it wide. A simple downward flick likely would have cut the lead in half. The cross was one of the few highlights for Schelin who did not come close to scoring in her four matches in Canada.

There appeared to be little urgency to Sweden’s play after halftime, or perhaps just sheer dominance by the top-ranked team in the world, at least until it became 3-0. That was in the 78th minute with most of the work done by Simone Laudehr who beat a defender to get the ball on her left and took a shot off that deflected off Swedish defender Nilla Fischer and then the post. Sisac followed it up and had an easy header for her second goal of the match.

The Swedes then appeared to wake up and scored on an 82nd minute free kick that went from Therese Sjogran to the head of Linda Sembrant. and less than two minutes later a direct ball found Germany’s defense stretched and put Jakobsson in alone on goal. Germany keeper Nadine Angerer came off her line and was able to cut down the angle and then make a save on Jakobsson’s shot.

That was the final hope for a miracle, and Germany put it away for good when a corner kick was played low and diagonal and Marozsan one-timed it to the upper 90.

Germany will play Friday in Montreal against France or Korea Republic. Their only real setback on Saturday was the yellow card to Saskia Bartusiak who will have to sit out that match because of a second booking. Sweden’s will have to sit on this until qualifying begins for France 2019.

Round of 16 game preview: Germany vs. Sweden
McDonald, Ohai score in 2-0 Dash win over Flash