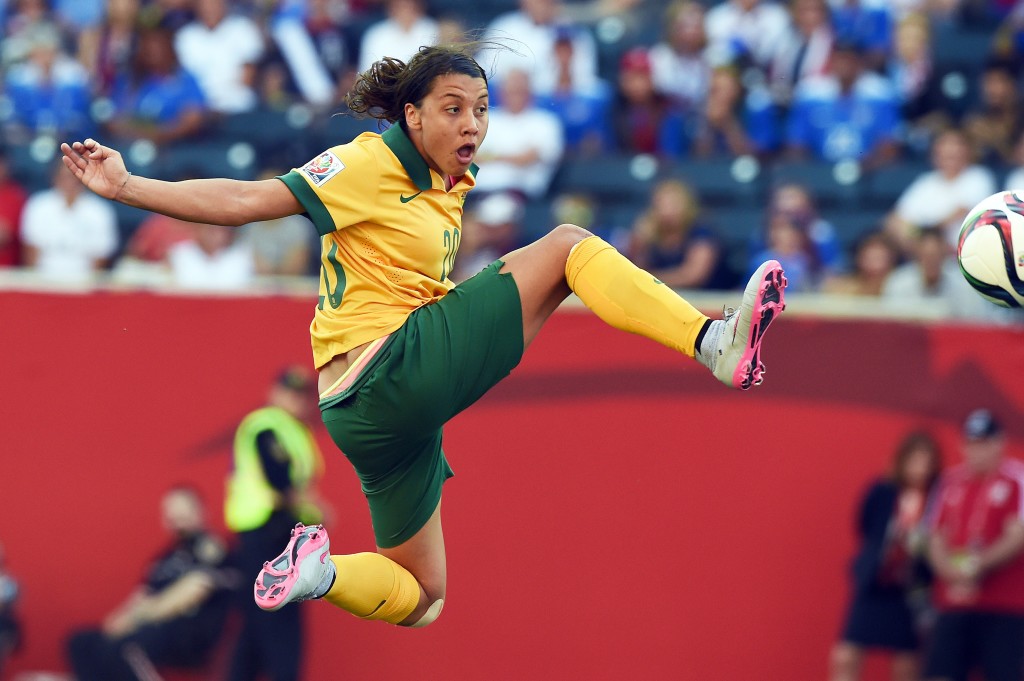 Sam Kerr has been great for Australia at this World Cup, which could be good news soon for Sky Blue FC. (Getty Images)

Group play is over at the Women’s World Cup and so is the NWSL mini-break.  The action resumes Friday night in Portland and continues with action on Saturday and Sunday.  NWSL players past and present made their mark on many of the 36 group matches.  Following is a look at how they did.  Keep in mind that everyone sees the World Cup differently and it is next to impossible to give full attention to every match.  Comments are, of course, welcome.

I’m not going to list out every member of the team, every one of which is on an NWSL roster, including Abby Wambach, who as far as we know will not play in the league this season.  I do feel comfortable saying the four best United States’ players have been Megan Rapinoe plus the defensive triangle of center backs Becky Sauerbrunn and Julie Johnston plus goalkeeper Hope Solo.  There was also Wambach’s goal to beat Nigeria and Meghan Klingenberg’s header off the bar and away from danger to keep Sweden at bay.  But the four above, for me, have been the class of the team.

On the flipside, Carli Lloyd has been a bit of an enigma in midfield with precious few moments in which she has impacted the game.  There have also been a few holes exposed on the right flank defended by Ali Krieger.  Opponents should be looking to that space when laying out game plans for the knockout round.  And Wambach, despite her goal, does not look to be in rhythm.  The same can be said for Alex Morgan as she rallies to hopefully reach full fitness in short order.

— Francisca Ordega lost some steam along the way but scored the goal that lifted Nigeria to a 3-3 draw against Sweden and their only point of the tournament.  She also created opportunity by running at opposing back lines just as she does with the Spirit.

— Allysha Chapman has been among Canada’s best players, locking down her side to help the team play three matches and allow one goal and also scooting forward with a purpose.  Chapman barely had time to assimilate with her Houston Dash teammates but is a player who can have a strong impact in Houston once she gets back with the club.

— Sam Kerr showed her chops against Nigeria and was dangerous at almost every turn.  She also worked well with Caitlin Foord who will be her teammate for the first time in NWSL at Sky Blue.

— Ajara Nchout Njoya has played just 101 minutes and only started one of three matches, but she scored Cameroon’s lone goal against Switzerland and at 22 it’s a decent feather in the cap to claim a goal at the World Cup.

Some of the rest

— Nadine Angerer has good stats, no doubt helped by seeing Ivory Coast and Thailand in the group.  She made one brilliant save against Norway but only seconds later produced a punch that may have gotten a U-8 keeper benched.  Skeptics of Germany’s chances point to Angerer’s lack of form over the last year.  She really has not had a chance to prove the skeptics right or wrong.

— Christine Sinclair’s pressure-packed penalty conversion to beat China notwithstanding, she has squandered too many chances near goal and at this point it is fair to wonder if her 2012 Olympic form is still an option for her.  She still works as hard as anyone and still has time to put her stamp on the tournament.

— Stephanie Catley was much more effective wide left than she was centrally, and combined with Foord she is part of the most daunting pair of attacking fullbacks in Canada.

— Jodie Taylor has spent much of the year trying to get healthy, something she did in time to make her World Cup debut on Wednesday.  Taylor might find herself below the bubble for playing time the rest of the way.

— Diana Matheson has yet to leave Canada’s bench but the smart money has her making an appearance against Switzerland on the weekend.

— Rhian Wilkinson, out with far less severe injuries than Matheson’s torn ACL and stress fracture, came on for nine minutes against the Netherlands and could see her role expand moving forward.

— Josephine Chukwunonye played all 270 minutes in back for Nigeria and signed with the Spirit during the tournament.  The Nigerians were not particularly organized on defense, but that doesn’t mean Chukwunonye can’t play.  The move might wind up helping Nigeria as much as anyone else.

— The Flash inked Halimatu Ayinde out of the Nigerian midfield.  The 20-year-old is still at the dawn of her international career and showed some flashes of brilliance during the World Cup.

— Haley Raso has yet to leave the Australian bench, which could make her that much more fresh when she joins up with the Spirit, who signed her last week.

FC Kansas City at Portland Thorns FC (Friday, 10 p.m. EDT):  The first ever matchup between these teams as current and former NWSL champions finds both in desperate need of points as neither played particularly well heading to the break.

Washington Spirit at Chicago Red Stars (Saturday, 8 p.m. EDT):  The Red Stars first home match since their season-opening stretch of four straight is a top-of-the-table clash against the team that essentially ruined their season in 2014.

Western New York Flash at Houston Dash (Saturday, 8:30 p.m. EDT):  The Dash are unbeaten in a club-record four straight while the Flash are up to .500 after a dismal first few weeks of the season.

Seattle Reign FC at Boston Breakers (Sunday, 4 p.m. EDT):  The Breakers are 3-0-1 at their new park, Soldiers Field, and they welcome the Reign who have struggled away from Seattle in their Shield defense.

This feature will return next week.  Will we see the start of a World Cup bounce? Or will this weekend’s conflicts with the Round of 16 keep people away?

— The Spirit waived Alex Singer on Wednesday.  This was not a surprise since Singer had lost the right back spot to Whitney Church, who is about to lose it to Ali Krieger.  The Dash and Thorns come to mind as teams that might want to give Singer a call.  Sky Blue also especially if they do not plan to use Caitlin Foord at right back.

— The decision to limit the referee pool at the World Cup to women was always a mistake, but I’m not prepared to use it as the reason so many calls have been missed in and around penalty boxes.  Calls, big calls, are missed all the time all the way up to the men’s World Cup.  Just ask England, who were on the wrong side of the Hand of God goal nearly 30 years ago.

— I’m thrilled to think several eliminated teams could have hung with some of the best.  Spain come to mind as well as Nigeria and maybe New Zealand.  But I am not thrilled to have had three overmatched sides—Thailand, Ivory Coast, and Ecuador—at this World Cup.  Yes they all got better as the tournament went on, but let’s see if they can now get better from where they left Canada.  There is no question women’s soccer is growing quickly and better than ever, but the way to make the pool deeper starts down the road in development and lesser matches like qualifiers and continental championships.  If throwing extra team in the World Cup aids that development, so be it, but 10-0 and 10-1 matches are not really part of what I think of about the world’s grandest sporting event for women.

— My updated Round of 16 predictions are as follows:

Cameroon 2, China 1:  The upstart African side will find two ways past the Chinese defense

United States 2, Colombia 0:  Concerns about the U.S. attack are real, but Colombia are not the team to take advantage of them

Germany 2, Sweden 1, aet:  Sweden will give the favorites all they can handle but eventually live to rue their poor play in the group stage.

France 2, Korea Republic 1, aet:  France will not be able to dominate on the ball as they did in the group but their superior skill will see them through a grueling match.

Brazil 3, Australia 1:  I underestimated Australia in group play and it is possible I’m doing it again here, but no team’s group matches set them up better for a deep run than Brazil’s did.

Japan 4, Netherlands 1:  Netherlands was not nearly good enough defensively in Group A and the going gets tougher against the holders, who stand to reach the quarterfinals playing exclusively against teams with no prior World Cup experience.

Norway 3, England 1:  Fantastic matchup will go the Norwegians, who will slow down England’s improving attack and pull away late.

Canada 2, Switzerland 1:  The Swiss can absolutely win this, but they were not great at finishing chances in their group and they figure to get less against a stingy Canadian group.

US women win Twitter, but Norway is bringing it
US staying loose despite pressure of K.O. stage