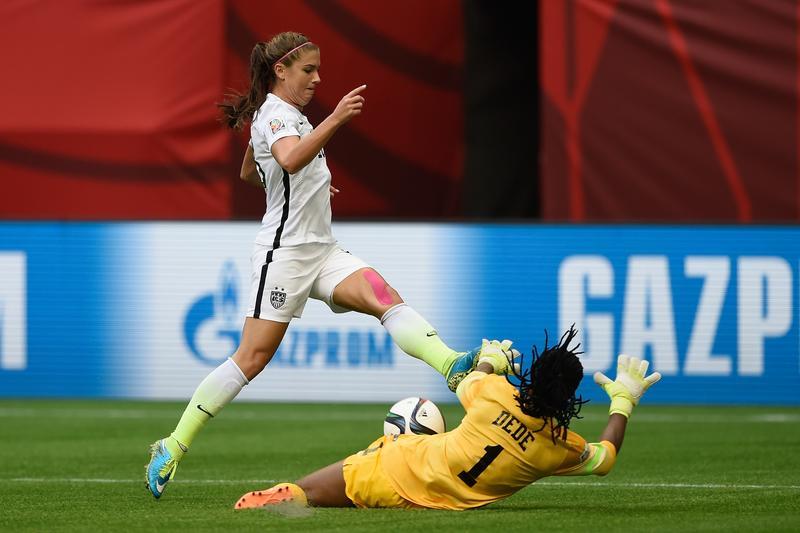 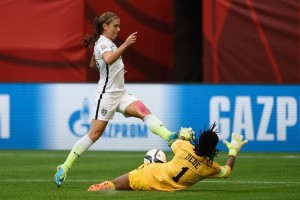 Morgan found herself in on goal 10 seconds into Tuesday’s 1-0 win over Nigeria. The U.S. took the opening kickoff and booted it forward to Abby Wambach, who flicked the ball into the path of Morgan in the box. Nigeria goalkeeper Precious Dede interfered enough to prevent a clean look for Morgan, and the assistant referee’s raised flag for an offside call ultimately would have nullified any potential goal.

But the threat was real, like a predator just announcing her presence in a new territory.

Morgan had come off the bench in seven previous Women’s World Cup matches, five in 2011 as a 21-year-old and twice earlier in this tournament.

“We were having laughs before the game. I was talking to Meghan Klingenberg and asking her if she could give me pointers. She’s such a veteran,” Morgan said jokingly. This is Klingenberg’s first World Cup, but she has started all three games to date.

As important as Morgan earning her first start in a World Cup match is her return to match fitness. Morgan played 66 minutes on Tuesday in her first start for the United States since April 4. She missed almost two months of play with a bone bruise in her left knee.

Morgan’s importance to the United States national team cannot be overstated. No longer the new kid on the block as she was in 2011, Morgan – along with Tuesday’s strike-mate, Abby Wambach – is one of the key players on which her team relies.

U.S. coach Jill Ellis said that the plan was to start Morgan by the Round of 16, but the striker was ahead of schedule in her return from injury. She played the final 11 minutes against Australia last week and the final 12 minutes against Sweden on Friday, building her to the point at which she could handle a heavier work load. “The perfect amount of time” is how Morgan describes her 66 minutes on Tuesday.

“I felt fast,” Morgan said. “I’ll have to ask the fitness coach about the GPS to see if I really was. She says my numbers have been looking really good, so I didn’t feel like I’m a step behind that I used to be.”

Morgan had two golden opportunities in the second half, first in the 48th minute, when Megan Rapinoe’s ball in behind put Morgan 1-v-1 with Dede. The Nigeria goalkeeper swatted down Morgan’s attempted lob to keep her team in the match.

Fifteen minutes later, U.S. defender Ali Krieger served a tantalizing cross across the goal mouth that put the ball on a platter for Morgan to finish inside the six-yard box, but Morgan’s point-blank shot went right into Dede.

“I really thought I was going to finish that one, the last couple of minutes I was in and the Nigerian keeper came over and made a really good save,” Morgan said. “Obviously I would like to score but I feel like I got a good 65 minutes and I’m looking forward to the next game.”

Her teammates look forward to it as well, for what they hope are another four matches in Canada.

England drop Colombia, face Norway next
US women to play Colombia in Round of 16