Korea through with 2-1 win over wasteful Spain 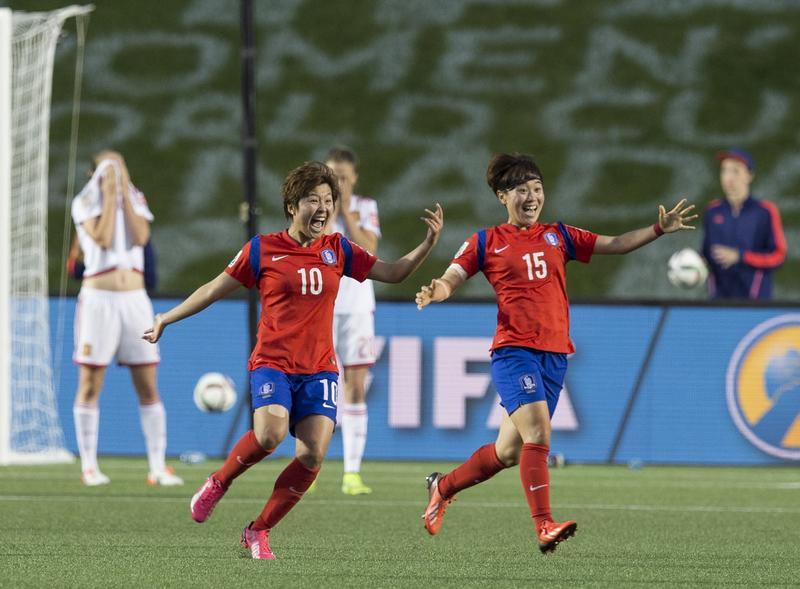 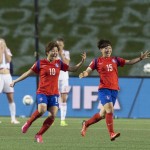 Korea Republic rallied for two second half goals to defeat Spain 2-1 and claim second place in Group E and a Round of 16 date with France on Sunday.  Spain suffered through another 90 minutes of failing to convert chances in the attacking third, and when Sonia Bermudez’s stoppage time free kick smashed off the cross bar, Spain’s chances of playing on smashed to pieces.

Both teams took the pitch knowing a win would send them through and that a draw could be a disaster, particularly Korea, who needed a win or else.  In the early going it looked like Spain would carry the day.  The Spanish kept the ball on the ground and on the move and kept their Korean foes chasing for the better part of a half hour.  But as was the case against both Costa Rica and Brazil, finishing was tough to find.

Spain finally broke through on 29 minutes.  With Korea back on their heels, Veronica Boquete slipped into the box and found enough space to accept a cross from Marta Corredera.  The cross had to slip by several Korean defenders, but once it did Boquete was able to redirect it in with one touch for her 30th international goal and first in World Cup play.

Unlike two games ago when Spain’s lead evaporated almost immediately in a 1-1 draw with Costa Rica, this one carried them into halftime.  Korea, who also led Costa Rica before a stoppage time equalizer left them 2-2 regrouped for the second half.

Korea Republic made some offensive changes both to the lineup and shape and they equalized with some exquisite soccer in the 53rd minute.  First Ji Soyum picked out Kang Yumi with a well-meant ball to the right flank.  Yumi dribbled towards the goal line and gained speed with her final touch that led to a cross back behind to the front of goal, five yards out.  Cho Sohyun slipped a yard above two Spanish defenders and headed the cross in to reset things at 1-1.

With Costa Rica hanging scoreless against Brazil (eventually a 1-0 Brazil win) even Spain knew a draw was probably not enough.  In the 78th minute, second half substitute Kim Sooyun snuck down the right side on an overlapping run. Whether she meant to cross or shoot from there, only Kim knows, but she beat an out of position keeper Ainhoa Tirapu, and with no one on the back post, the ball nestled inside the far post to make it 2-1.

Brazil eventually took a 1-0 lead on Costa Rica and won by that score.  That meant Spain would draw lots for the decisive second spot if they could get an equalizer.  They pushed for it but continued their theme of being unable to use their outstanding technical play to create goals.  Deep in stoppage time the Spanish won a free kick from 20 yards out.  Sonia Bermudez beat the wall but not the crossbar, ending the match in heartbreak for Spain, ecstasy for Korea Republic.