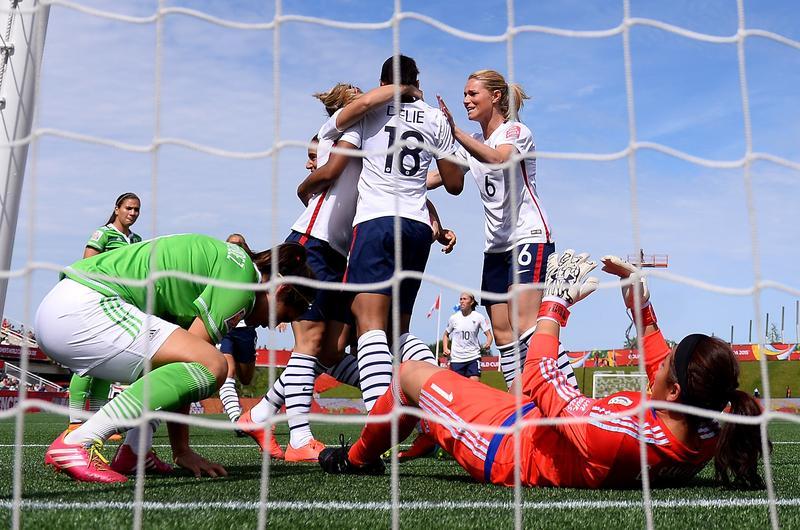 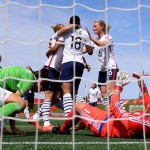 It took all of 34 seconds for France to allay fears that they may be imploding after being on the wrong end of the upset of the World Cup against Colombia. With only 13 minutes gone, the French had buried Mexico and were well on their way to not only winning the match, but Group F as well.

By the finish, it was a 5-0 statement by France that they are still a favorite in the World Cup, and a rather ignominious exit for Mexico, who finished a point behind the total it posted in 2011 and appears to have little chance to qualify for next year’s Olympics (CONCACAF only has two berths).

Almost from the opening kickoff, Elodie Thomis – who did not play against Colombia – began torturing Mexico’s right side. She got to the endline and goalkeeper Ciecilia Santiago could not hold her cross, allowing Marie-Laure Delie (who was making her first start of the tournament) to head it in after only 34 seconds, the second fastest goal in World Cup history. France doubled its lead in the ninth minute when a corner went through several bodies before being redirected in by Jennifer Ruiz for an own goal.

Four minutes later, it was 3-0 when Thomis got to the endline again, finding the head of Eugenie Le Sommer at the front post. Le Sommer scored her second accidentally in the 36th minute when Santiago saved a free kick but again couldn’t prevent a rebound. Delie’s shot caromed off an unsuspecting Le Sommer and into the net for a 4-0 lead France took to the half.

Leo Cuellar, who may or may not be under pressure for his long-time job, made two changes at the half, including bringing on Renae Cuellar, and Mexico made a better showing in the second half, but by then France had long since shifted into cruise control. Meanwhile, French coach Philippe Bergeroo benched Louisa Necib in favor of young Lyon player Amel Majri, and France seemed to respond to the pressure after the somewhat humiliating loss to Colombia.

Mexico was able to hold France off the scoreboard in the second half until the 80th minute when Amandine Henry – who also did not start against Colombia – unleashed a blast from 35 yards out to stake her claim for goal of the tournament.

France is now where most expected them to be, in a second round game Sunday in Montreal against the second-place team in Group E. As has been talked about extensively, Germany would possibly await in the quarterfinals next weekend.

Even with the defeat, France leads all teams in the tournament in possession and has racked up an impressive 56-8 differential in shots through the group stage (19-2 in this match), which will mean little going forward, but certainly means they probably won’t be an easy out.

England focused on themselves against Colombia
England drop Colombia, face Norway next