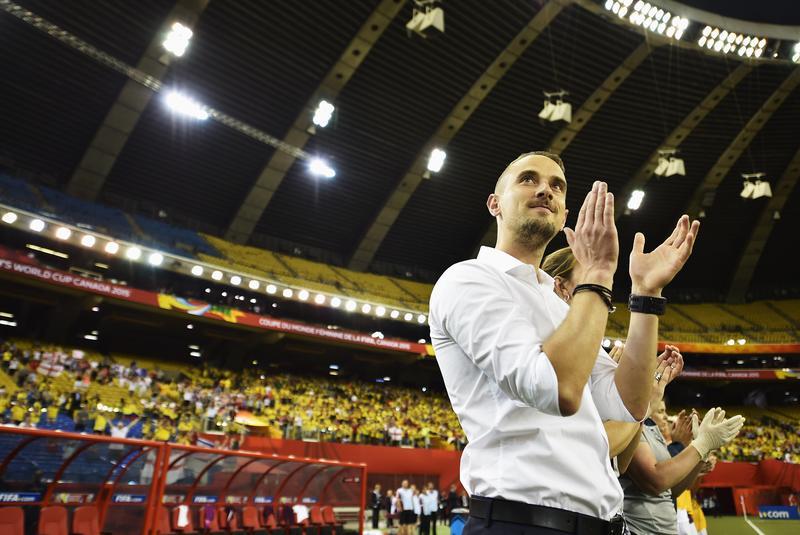 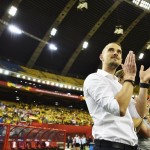 England manager Mark Sampson is pleased with how his side navigated Group F. (Getty Images)

Montreal, Quebec – Top spot in Group F was on the line for England and Colombia at Olympic Stadium. A win for Felipe Taborda’s Colombian side would secure them first in the group no matter the result between France and Mexico. England needed a win and goal-differential help to stay above France. Karen Carney and Fara Williams both scored first half goals to help England defeat Colombia 2-1. The 13,862 spectators primarily dressed in Colombia kits went home disappointed.

Coach Felipe Taborda briefly talked about how his team was never in stride against England and a possible matchup with the United States in the next round.

“We didn’t have the best attitude at the beginning. England was playing very well. We couldn’t find our compass. The first half was not a good half for us. If we have to play the United States we will play them. We will have to play the best game possible.”

Over in Ottawa it was Les Bleues who completely dominated Mexico from start to finish. France crushed Leonardo Cuellar and Mexico by a resounding score of 5-0. France claims top spot in Group F thanks to a +4 goal-differential over England’s +1. Lionesses’s manager Mark Sampson was pleased to see his team advance to the next stage and looks forward to what awaits his team.

“First and foremost we’re pleased to win the match. Pleased to be qualified. Mission accomplished in terms of what we wanted to achieve in the group stage and in a good place. We’ve used a lot of players, kept people fresh, used various different systems and I think we’ve shown over the course of three games that this is a very adaptable and an England team with a strong, strong winning mentality. We’re pleased. We’ll recover now and get ready for an important tie, clearly. As far as we’ve done now, we’re pleased with what we’ve done so far, but we’ve got to focus on the next one.”

Mark Sampson and England will face Norway with a bevy of weapons to throw at the Norwegians. Selecting which players, tactics, formation and approach will be the key to coming out on top.

“To be honest, we’re going to face a really good Norwegian side. They drew with the best team in the tournament, Germany. We’re facing a higher quality team, but this England team is playing well at the moment. We’ve got a lot of weapons we can use to potentially hurt this Norwegian team. We’ve just got to choose which ones and make sure we get the selection right, and get the game plan right. This team (is) ready. We’re going to go into that game in a good place, confident and looking really positive.”

France will stay in Montreal and play the runner-up in Group E. England will travel to Ottawa to take on Norway, Monday June 22. Colombia falls from first in Group F to third and will most likely travel to Edmonton to take on the United States.

Colombian playmaker Yoreli Rincon wasn’t willing to confirm or suggest that her team is already moving on to a knockout round match against the U.S. Rincon and her teammates will wait to see what happens. If they play the U.S. they’ll be ready.

“We don’t know if it’s U.S.A. or Japan. Whatever it is, U.S.A or Japanese it’s a big game, a hard game. They are the best in the world. I think we need reset and see what happened in this game and improve.”

The loss of goalkeeper Sandra Sepulveda to her second yellow card of the tournament will be a devastating blow to the Colombian team. Before the World Cup Sepulveda was a bit of an unknown, but that’s not the case within her team. Rincon talked about how important Sepulveda is.

Sampson made five changes to the side that knocked off Mexico 2-1 on June 13 in Moncton. Casey Stoney, Alex Scott, Alex Greenwood, Jordan Nobbs, and Karen Carney all earned starts. Claire Rafferty, Eniola Aluko, Jill Scott, Lucy Bronze, and Laura Bassett all started on the substitutes bench. Taborda made one change to his lineup by adding in Catalina Usme.

Despite having the support of a vocal Colombian crowd, it was England who quieted the masses and opened the scoring. Steph Houghton had a free kick from distance that was manageable, but difficult for goalkeeper Sandra Sepulveda to handle. The rebound was there for the taking and Karen Carney pounced on the ball firing it through the legs of Sepulveda.

While France was dominating Mexico, England was cruising along comfortably with an early first half advantage. England was off to a lively start and by far playing their most together and organized football of the tournament. The injection of Carney gave the Lionesses a much need jolt to their attack.

Colombia gave up far too many free kicks to England in the first forty-five. England was once against able to score after a scramble in the Colombian box. Steph Houghton had her free kick bounce around the box. Colombian tried desperately to block and prevent England from scoring. In the process, Carolina Arias was called for a blatant hand ball while lying on the pitch.

Veteran midfielder Fara Williams calmly stepped up and converted the penalty to give England a 2-0 lead in the 38th minute. Colombia’s strong defensive performance against no.3 ranked France was quickly coming unraveled after a disastrous first half against England.

In first half stoppage time Karen Bardsley made a brilliant save by using her face. Arias was sent in via a fantastic ball from Rincon. Bardsley was well out to cut down the angle and preserve the 2-nill lead.

England went into the break up 2-0 while Colombia looked for inspiration and a better showing after the re-start.
Neither coach made any substitutions prior to the second half kickoff. England was content to seeing the match out while Taborda gave his starters more time to cut into the deficit. Carney’s minutes have been monitored during the World Cup while she works on her fitness. Sampson elected to swap Carney for Lianne Sanderson on 55 minutes.

Try as they might, Colombia did not do enough to challenge and beat Bardsley after the hour-mark. Center backs Houghton and Stoney played terrific. England was by no means sitting back and parking the box. Colombia had turned up the pace of play, but had every cross cleared and shot blocked when they ventured towards the England box.

The Lionesses didn’t need to get forward or create anymore offense. Sampson brought on Jo Potter and a healthy Jodie Taylor to help England seal a win. Taylor was sent in 1 v 1 with Sepulveda. The Colombia keeper raced out of her net to stop Taylor. In doing so she tripped up the England striker. Referee Carol Anne Chenard issued a costly yellow. Sepulveda, who was already on a caution from last match will now miss the next Colombia match due to yellow card accumulation.

Colombia was able to score a late marker in stoppage time. Lady Andrade was able to chip the ball over Bardsley. The brief amount of momentum was not enough to get Colombia to produce a draw. England did just enough to prevail.

England played their best match of the tournament and secured a spot in the round of sixteen. The Colombian fans were out in full force, but it was not enough to push Colombia to a victory. England has done the job and will finish second in Group F.