Americans invade Vancouver, a city fit for the World Cup 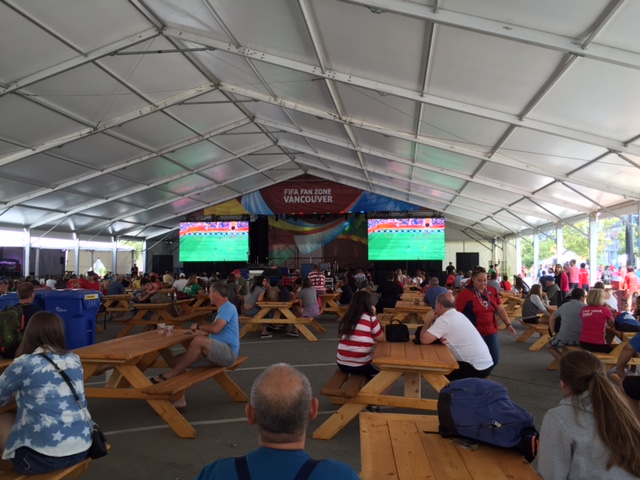 The fan zone in Vancouver.

VANCOUVER, British Columbia – At a glance, Vancouver could be mistaken for a neighbor to the south – Seattle, perhaps.

The vibrant streets of the picturesque waterfront city on the Pacific Coast are lined with red, white and blue ahead the United States’ match against Nigeria on Tuesday in the group stage of the 2015 FIFA Women’s World Cup. Fans donned in United States jerseys significantly outnumber those dressed in host-nation red on Monday and Tuesday.

A capacity crowd of over 51,000 fans is expected at BC Place — also the site of the final on July 5 — on Tuesday night for the match and it will almost certainly be predominantly American. United States and Canadian citizens account for 95 percent of all World Cup ticket sales across the six host cities, a National Organizing Committee spokesman told NBC Sports on Monday.

A group of American Outlaws – a supporter’s group of the U.S. men’s and women’s national teams – are in town and will march from the fan zone adjacent to the stadium into the games before the 8 p.m. ET kickoff on Tuesday.

Temporarily constructed in a parking lot diagonal from BC Place, the fan zone offers free admission for anyone to watch out-of-town World Cup matches. It looks something like a small concert venue, with two big-screen TVs showing live matches, food trucks and sponsored activities.

Fans can come to life on a television screen as a goalkeeper in a motion-sensor video game, or learn the history of each of the past six Women’s World Cup champions. There’s also a miniature turf field for up to 20 kids at a time to play a small-sided game.

“I could watch this all day,” says 40-year old attorney Max Barteau of Paradise, Calif., watching his daughters play a pick-up game on the turf. Barteau came to town with his three daughters (age 10, 9 and 7), 4-year-old son, wife and mother to watch Tuesday’s game and he was particularly impressed with perks like free soda in the fan zone.

“I would definitely come back,” Barteau said.

[MORE: What to watch on Tuesday at the Women’s World Cup]

Vancouver boasts the only fan zone of the six host cities located outside of the actual stadium, which creates a buzz that is lacking in some other locations where the game is the main attraction. The fan zone is positioned in the heart of downtown and is modeled after the similarly successful setup for the 2010 Vancouver Olympics. The city spent $1.2 million CAD to keep the fan zone open on non-gamedays.

“We saw this as a great opportunity to do something similar to welcome the world to Vancouver to celebrate women in sports,” says Andrea Dowd-Dever, producer of the fan zone, who likens herself to the person in charge of the party.

Up to 5,000 people can fit into the one-square block area at a time. Attendance has peaked around 2,000 people during Canada matches, with up to 7,800 fans coming through the gates in one full day. It’s a family-friendly atmosphere but has the food and alcohol that adults seek, without the rowdy bar-scene baggage that often comes with it.

And by making admission free, organizers hope to expand the reach of the Women’s World Cup beyond just those in town to attend games in the stadium.

“It is very specific in that this is a unique city that we’re exposing to a demographic of people who aren’t even necessarily going to the game,” Dowd-Dever said, noting that some parents have young children that they couldn’t take to a live match in the stadium.

A handful of Thai nationals were on hand to watch their country play Germany on Monday. Thailand, playing in its first Women’s World Cup, lost 4-0 but still has a chance to advance to the Round of 16 if other results fall into place on Tuesday and Wednesday.

Myuu Apisampinuong, 25, was among those carrying miniature Thailand flags around the fan zone. She won’t be attending any matches at BC Place, but she is excited to be able to watch her team with other fans.

“It’s pretty cool because everyone can come here and have fun together,” she said, spirits high despite Thailand’s loss moments earlier.

On Tuesday, many of those street-side fans wearing faded blue U.S. jerseys or t-shirts with the outline of Megan Rapinoe’s distinguishable hair will file into BC Place to watch the United States play Nigeria in what should feel like a home match for the Americans.

“Playing basically in our back yard, I think it’s been helpful,” U.S. defender Ali Krieger said Monday. “Because you look up from the field and you just see red, white and blue. I think that just gives me an extra motivation to want to be successful out there and want to win not only for each other and for the U.S., but just for our fans and supporters and family who have made the trip out. I think that’s been really inspiring for all of us and gives us an extra energy that I don’t think we had before in different tournaments.”