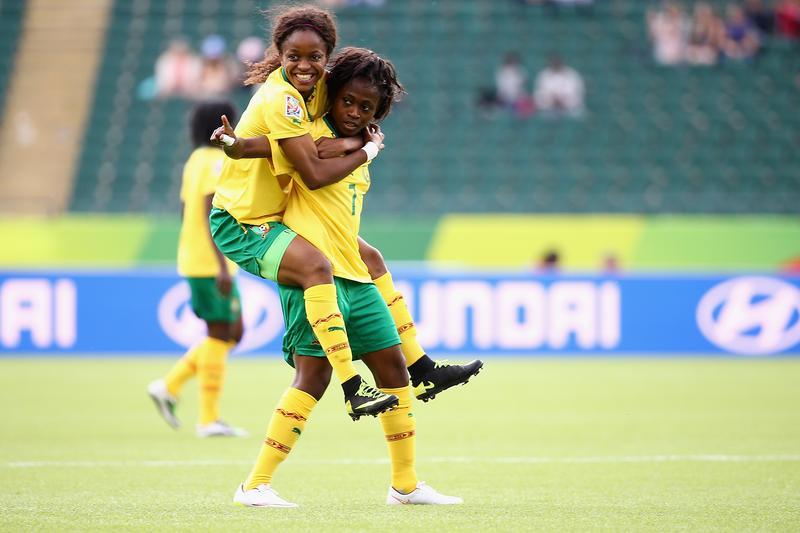 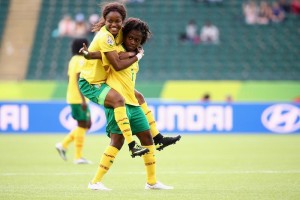 Cameroon had a lot to celebrate on Tuesday. Their 2-1 win over Switzerland means their maiden World Cup will include a knockout match. (Getty Images)

Cameroon would have advanced with a draw in its Group C finale Tuesday against Switzerland, but one of the biggest overachievers of the World Cup did so again in Edmonton, coming back from a halftime deficit to dominate the second half and upset the Swiss, 2-1 behind a goal and assist from 4-foot-11 midfielder Gabrielle Onguene.  The win secured second in Group C and a Round of 16 berth for Cameroon.  The result was also the tipping point that booked the United States, Netherlands, and Colombia into the knockout round.  And a few hours later when Group D shook out, Switzerland too was officially moving on.

Swiss coach Martina Voss-Tecklenburg changed things up a bit, moving Ramona Bachmann and Lara Dickenmann wide and putting Fabienne Humm and Ana Maria Cgnogorcevic up top. It seemed to work in the first half when Bachmann was denied on a breakaway by Cameroonian goalkeeper Annette Ngo Ndom after a missed clearance in the 20th minute and four minutes later, the Swiss were in front when Bachmann got to the end line and cut the ball back for Cgnogorcevic to finish.

Switzerland (3 pts.) had a couple of other chances to extend the lead before the half, but did not, and the second half belonged almost entirely to Cameroon (6 pts.). Just two minutes after the break, Gaelle Enganamouit whiffed on a low cross, but it turned out to be a perfect dummy for Onguene, who evened the match from 10 yards out.

Cameroon finished the turnaround in the 62nd minute, when it was Onguene blowing by Swiss defenders again. Her cutback found veteran Madeleine Ngono-Mani (who had just come on as a substitute) and she made no mistake with her header from three yards out. The Indomitable Lionesses had a few other chances to add to their lead, but never did. At the other end, tiring Switzerland found few chances, the best coming in the 73rd minute when Cgnogorcevic got loose on a set piece but didn’t make solid contact.

Switzerland still has a good chance to advance as a third-place team (they are currently ahead of Thailand but behind the Netherlands), but will have to sweat for at least the rest of the night to find out.  They will advance if Nigeria do not beat the United States. Switzerland showed flashes of good play against Japan and throttled Ecuador, but they were second best in the second half Tuesday.

Africa had won only four matches ever in the World Cup (three by Nigeria, none in the knockout stages) coming into this tournament and Cameroon was picked by many to advance largely because Ecuador was in the same group. But they crushed Ecuador 6-0, outshot defending champion Japan 20-4 in a 2-1 loss, and completely owned the last 45 minutes against Switzerland Tuesday.

Cameroon only gets three days of rest before taking on China Saturday in the second round, but they do not have to travel (the match, like this one, is in Edmonton). It also means they’ll have plenty of fans on their side, both the Cameroonians who turned out in force for this match and the neutrals who have become captivated by their story and entertaining play.