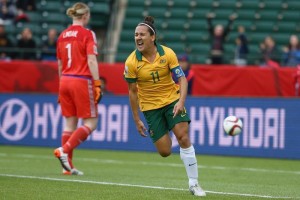 A match that started out with both teams seemingly going for broke settled into both teams apparently pleased with their lot as Australia and Sweden played to a fairly drab 1-1 tie in their Group D finale in Edmonton Tuesday night.  The result put Australia into a Round of 16 match against Brazil as the group runner-up.  Sweden must wait a day and hope for favorable results from Group E or F.

It was more understandable for Australia (4 pts.) and Alen Stajcic to play that way. After Lisa De Vanna took advantage of some poor defense to get on the end of an Alanna Kennedy long ball to give the Aussies a 1-0 lead in just the fifth minute, Sweden answered with a remarkable individual effort from Sofia Jakobsson 10 minutes later to even the match. Sweden (3 pts.) had the better chances in the rest of the first half, with Amanda Ilestedt and Caroline Seger both narrowly missing with headers off corners, and Nilla Fischer forcing a nice save out of Lydia Williams (who probably wanted the goal she conceded back after getting beat at the near post) on a 30-yard free kick through traffic.

The Aussies set out to protect their draw in the second half, one that clinched second place in Group D and a second round match against Brazil in Moncton on Sunday. What was surprising was that they were rarely challenged after halftime. To be fair, Sweden was in a bit of a precarious position, a defeat would mathematically eliminate them (for only the second time ever at a World Cup).

Sweden’s caution allowed few chances to Australia, the best probably from Katrina Gorry in the 74th minute, which was blocked by Ilestedt before getting anywhere near goal. Sweden made a few half-hearted forays into the attack as the final minutes ticked off, but never truly threatened Williams in the Australian goal.

Sweden must now wait what could be a nervous 24 hours to see if their three points (on three draws) is good enough. Among third-place teams, they are currently behind the Netherlands and Switzerland, but ahead of Thailand. They need to be ahead of either the Group E or Group F third-place team to advance. Their best hope is in Group E, where if Brazil beats Costa Rica, the third place team in that group cannot finish ahead of the Swedes.

However, Brazil has already clinched Group F and any Costa Rica draw 2-2 or higher (or a win, obviously) will see them finish above Sweden. A 1-1 draw in that match could see lots being drawn, while a 0-0 would see Sweden advance. Sweden can also hope for a draw between Spain and South Korea, which would leave both those teams on two points. Or, they could be bailed out by Group E if Colombia can shock England.

That’s a lot of “ifs” and “ors” for a proud Swedish team that came into the tournament in many people’s minds as a legitimate title contender. And the beauty of it is they still might be. Of course, even if they do advance, their opponent in the second round: Germany.

Cameroon 2-1 Switzerland: Debutantes moving on
Wambach lifts US past Nigeria, into Round of 16