Women’s World Cup — what we learned on Day 10 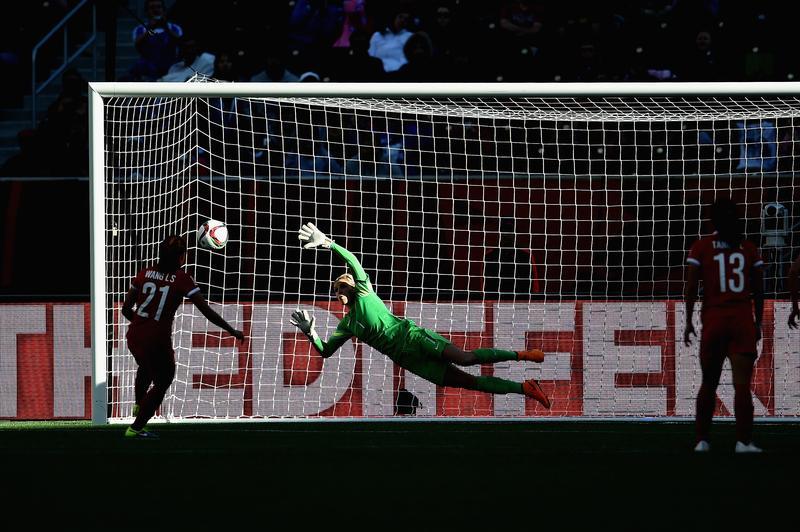 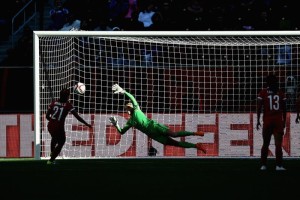 Erin Naylor guessed right but could not get to Wang Lisi’s penalty. (Getty Images)

There’s more than one way to skin a cat, we’re told, which is really disgusting and should get you thrown in jail, actually. (The origins of that gruesome cliche are interesting as well.)

Thailand and Ivory Coast attacked essentially being outclassed in completely different manners, and neither is necessarily wrong. Although, it would have been hard to argue that after last week’s first matches where Germany scored 10 times against the disheveled Ivorians and possibly could have doubled that with a little luck.

But Ivory Coast had taken the YOLO approach, throwing a legitimate 4-3-3 out there and not worrying about the repercussions of not giving much cover against the top-ranked team in the world. There were some benefits, even though they weren’t readily apparent in the match in question, the most important being that Ivory Coast actually looked dangerous on a few attacks and not just with one attacker who might get loose in a 1-v-3 situation. Thailand wasn’t about to be that brave, and they were able to frustrate Norway for long stretches. Their one outlet – Kanjara Sung-Ngeon – proved to be excellent in the thankless role, although organized, disciplined Thailand (whose average height is only 5-feet-4-inches) still fell 4-0.

If the real test was when the two teams clashed, obviously Thailand’s method prevailed, the discipline took advantage of a couple of Ivory Coast mistakes (and the lack of an offside flag) to score three times and hold on for a 3-2 win.

But with one more chance to prove itself, Ivory Coast did not change who they were Monday against Norway, potentially setting themselves up for another lopsided result on its way out of Canada. However, as people squinted at their televisions (and in Moncton), hoping not to see another dismantling (possibly some masochists did), a funny thing happened. Ivory Coast and the dangerous Josee Nahi had the game’s first chance, and had a few others after that as well.

In the end, the Ivorians still have plenty of work to do on defensive organization and possibly goalkeeping, but they gave Norway (albeit a changed side) fits before falling 3-1. Ivory Coast had 46 percent possession and the shots ended up even at 16-16. And they left with possibly the goal of the tournament when Ange N’Guessan unleashed a 35-yard missile in the 71st minute, a goal they surely deserved on the balance of play.

Thailand certainly deserves plenty of credit Monday as well, as goalkeeper Waraporn Boonsing and that discipline held Germany to just one first-half goal before falling 4-0. As I said before, their way of going about things was not incorrect, either. But with a little bit of coaching and experience, Ivory Coast, like Cameroon and Nigeria could be a factor in the international game in the not-so-distant future.

What else did we learn Monday in Groups A and B?

New Zealand falls short again:  New Zealand have now played in four World Cups, including the last three, and have a combined match record of 0-9-3 (7 goals scored, 29 against.)  Obviously they have yet to advance out of the group stage.  But this is the one they will look at as one that got away.  Sure they were hard done by a gaffe of epic proportions by the referee that altered the course of Monday’s 2-2 draw with China, but there was also Amber Hearn cracking her penalty off the crossbar in what turned out to be a scoreless draw against Canada.  And there was Erin Nayler making her only mistake of the tournament and having it cost her team a pivotal goal against China.  Hearn, the program’s marquee player, will be 34 at the next World Cup.  Ali Riley and Emma Kete will also be across 30 and Abby Erceg and Ria Percival will be 29.  That is not too old to make a run, but the window for the current crop is at the very least on its way down.

[KASSOUF: United States expects Nigeria to ‘fight for their lives’]

It’s tough to change gears on the fly sometimes:  Neither Germany nor Norway played well Monday, especially in their respective first halves. The coaches, despite changing several players each, will not make excuses for their teams, and they shouldn’t. However, even past all the new faces, it can sometimes be hard to play when: a) the opponent has proven that they are weaker than you, and b) the game is not essential. Yes, the group was at stake, but the goal difference was too much for Norway to realistically overcome, and really, second is almost as good as first going forward the way the bracket shapes up. The bottom line is I wouldn’t judge either team too much on this performance.

China will be a tough out:  If not for how good China were in the 1990s, the current iteration would be viewed as a future world power.  Instead they are left to chase the Sun Wen teams that never quite got over the hump in a World Cup or Olympics.  This team probably won’t either, but their first knockout match is going to be against Cameroon or Switzerland, and the winner of that likely gets the United States.  The Chinese lack the breadth of attacking personalities to make a deep run, but whoever knocks them out is going to have to work at it.

Norway will likely need Ada Hegerberg to be ‘on’ to win:  She won’t turn 20 until after the World Cup, but Hegerberg is clearly Norway’s best attacking option and her strength will be needed against whomever Norway draws going forward. But they’ll probably need her to finish, or at least set someone else up to do it. There is always the possibility that Norway could score on a set piece, and they wouldn’t necessarily need Hegerberg for that (see Mjelde, Maren), however if they’re scoring in the run of play, it will probably involve Hegerberg.

Netherlands waiting, planning:  There were high hopes for the Netherlands ahead of their first World Cup, and even though they won their opening match and grabbed a late equalizer against Canada to almost certainly go through, there must be an air of disappointment around the team.  Their attacking components were not enough of a factor during group play and both the goals they surrendered were the products of horrible defensive miscues.  Japan or Germany await in the Round of 16.  That could be good insentive to throw caution to the wind and see if Vivianne Miedema, Lieke Martins, and Manon Melis can help spring an upset.

The weak group may actually hurt Germany:  They obviously struggled in the second half against Norway, and really weren’t tested any other time. So does Silvia Neid really know what she has? Dzsenifer Marozsan came in battling an injury (yet curiously started Monday) and has not looked great in either of her two matches. Nadine Angerer had a couple of solid saves against Norway, but who knows about her and the back line? If they get in trouble against a team like Sweden in the second round, how confident will they be to find their way out? Or are we nitpicking and moving toward the panic button for no reason?

US expecting Nigeria to ‘fight for their lives’
Nigeria discusses faith, but not sexual preference