Women’s World Cup — what we learned on Day 7 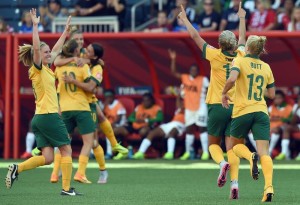 Australia celebrates a goal against Nigeria, who they beat 2-0 on Friday. (Getty Images)

Quality is a term bandied about in soccer circles, but sometimes without interpretation. What is it? Do I know it when I see it?

So you’ll have to help me here, but my dictionary I dusted off says, “the standard of something measured against other things.” Nah, that’s not going to help us much either.

Cameroon was able to create chances against Japan, were very dangerous going forward, especially through Gaelle Enganamouit, who had a second stellar match, this time against a “quality” opponent (see what I did there). However, there was something missing, especially in the final third, that last touch, little bit of deception that frees up your team for better scoring chances (until the 90th minute at least).

So while the debutantes from West Africa thrilled the crowd with their endeavor, athleticism, and individual skill, in the end it was a couple of moments of brilliance from Aya Miyama & Co. that separated Japan and upstart Cameroon Friday night.

For Cameroon, they can take solace in the fact that not too long ago, it was Japan that was just missing that “quality” thing in their play, which led to group-stage exits in their first few attempts at the World Cup. Even with a loss on Friday, Cameroon should be able to avoid that fate (thanks to the generous new format), and will get a chance to scare a higher-ranked opponent in the knockout round.

Cameroon’s performance here is already a marked improvement over their showing at their first big international tournament, the 2012 Olympics (although they didn’t get to play Ecuador in Britain). Might they be taking the same road Japan has taken from pretender to contender? Obviously time will tell, and Cameroon has far more obstacles than Japan did to get to the top, but four years can be a long time.

Maybe enough to find that ever elusive “quality.”

What else did we learn from Groups C and D Friday?

Sweden came to play: There was ad nausea discussion the last few days about how much better the United States would play and about how comments made by U.S.-turned-Sweden coach Pia Sundhage would inspire them to the win. Well it turns out Sweden came to play as well. Sundhage’s side were rarely if ever stretched out defensively as they were by Nigeria and used calculated, deliberate buildup to play smart through midfield. You can argue the United States had a slight edge in the total play but it was Sweden who had the two best chances, one a 2-v-1 that went awash when the pass for Lotta Schelin was behind her allowing Becky Sauerbrunn to make a recovery tackle, and the ball cleared off the crossbar by Meghan Klingenberg. Sweden goalkeeper Hedvig Lindahl was on her game as well. The draw does not get Sweden out of the woods just yet but it should set them up well for next Tuesday’s finale against Australia.

Party crashers? There are plenty of permutations to play themselves out and assuming Cameroon won’t beat Switzerland might be presumptuous at the moment, but Cameroon could meet Canada in the next round if things play out the way they should in the final game. It was thought by “experts” (yes, that includes people like me) that first-place teams playing third-place squads might have a really easy time in the knockout stage and may even be able to rest people for the quarterfinals possibly. Who knows if Cameroon could pull an upset in such a scenario? But they certainly look like they have a lot better chance than they did about a week ago. And wouldn’t that be something.

Nigeria are likely done: Nigeria gave us a thrill by rallying twice to draw Sweden in their tournament opener. 20-year old Asistat Oshoala, the star of last year’s U-20 World Cup, showed that she has the goods for the senior level, and 21-year old Francisca Ordega showed the form displayed with the Washington Spirit was no fluke. But a weary side did not make a substitution in that match and coach Edwin Okon ran the same 11 back out on Friday, finally going to his bench early in the second half. As a result of some fatigue and some splendid play, Australia sent Nigeria to a 2-0 loss and almost certainly bought them tickets home after next Tuesday’s group finale against the United States. Nigeria likely need to win that match to advance which seems a longshot based on their lack of depth and relative lack of defensive organization. But unlike past World Cups, Nigeria will leave this one having given fans a sense of what could lie ahead. Some more seasoning for the youngsters and a solid, steady game plan in back could soon make Nigeria the first African power in women’s soccer.

Ecuador really did give it the old college try: If you didn’t see the match (and most of you probably didn’t seeing as it was head-to-head with the U.S.-Sweden game), Monica Quinteros probably should have drawn a penalty for Ecuador in the 31st minute when she was pulled down by Rahel Kiwic. At the time, it was just 1-0 Switzerland, and that was on an own goal. Malaysian referee Rita Gani said no, unfortunately. It was still 1-0 when the Swiss scored on the final kick of the first half and Ecuador – unlike in its first game – was fighting for everything, even if it didn’t have much of the ball. It got ugly quickly in the second half when their will was broken, Fabienne Humm’s hat trick in five minutes was only the start of Ecuador’s misery. The final nine Swiss goals by minute: 45+2’, 47’, 49’, 52’, 60’, 61’, 71’, 76’, 81’. At one point, Ramona Bachmann scored 13 seconds after the kickoff from her last goal. Eventually, Gani felt badly enough to give Ecuador a questionable penalty, and really, no one complained. Not even the Swiss. But the fact remains that Ecuador really put up a good fight for a half, even if it ended 10-1.

Sweden-Australia should be dynamite: Few Americans are likely to watch since final group matches have synchronized kickoffs, but Sweden-Australia is shaping up as the choice match of the final round of group games. Here’s what we know: if either team wins they secure at least second place in the group and move through to the knockout phase. A draw almost certainly puts Australia through and could be enough for Sweden as well. Either could move on with a loss but neither will want to be sweating things out. Australia might be the most impressive side in the group so far and they have been tactically on target in both matches. The Aussies are deceptively quick, have the best looking midfield in the group so far, and have multiple players who can score. They also moved Stephanie Catley to the outside and the outside back combo of Catley and Caitliin Foord is as aggressive as any tandem in the World Cup.

Historic day for Angie Ponce: She may be a little embarrassed about it on Friday night, but the fact that Ponce scored her country’s first World Cup goal and then scored TWO own goals in the same match? That’s a day for the record books, and one that hopefully she’ll be laughing about before too long. The utter joy the Ecuadorian team (and the crowd) showed when Ponce scored (it was 7-1 at the time) was a great moment. Unfortunately, Ecuador’s final match will be against Japan.