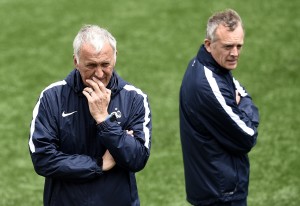 The Atlantic outpost of Moncton reverberated shockwaves back across all of Canada and around the world on Saturday afternoon as the site of Colombia’s titanic, 2-0 upset over France in Group F play at the Women’s World Cup.  Prior to the match Colombia had never held a lead in a World Cup match and no South American side other than Brazil had ever won a match at the tournament.

Lady Andrade scored against the run of play in the 19th minute and Colombia held that edge until stoppage time when French keeper Sarah Bouhaddi misplayed a ball trying to help France push for the equalizer and Catalina Usme scored on the counter.

France pushed hard for the equalizer but always seemed a bit off in their final pass, and Colombia keeper Sandra Sepulveda played an excellent match after sitting out the opener as she recovers from a broken leg.  The match was not without its controversy though.  Colombian defender Daniela Montoya blatantly and intentionally handled the ball in the penalty box in the 67th minute.  Instead of a penalty and a red card, the call was missed and Colombia were left to play on with 11 and a 1-0 lead.

France carried nearly all of the possession through the first 19 minutes until a strange sequence on a throw-in gave the ball to Colombia for a throw.  After knocking around and winning a 50-50 challenge, the ball found its way to the feet of Yoreli Rincon.  The Colombian central midfielder delivered a perfect through ball to Andrade who beat Bouhaddi to give Colombia a 1-0 lead.

Seventy minutes is an eternity to hold a 1-0 lead against a superior opponent, and it was not often pretty, but Colombia remained dedicated to the game plan and did not capitulate defensively.  When France did get shots off Sepulveda was there to clean them up.  France pushed frantically late and had a late chance deflect wide after it appeared headed in to tie the score.

Catalina Usme, who did not start the match, scored the second goal.  Bouhaddi dribbled it well beyond her box deep in stoppage time and lost possession.  Usme was able to get a clear look before the French keeper was able to recover her position.

Colombia now lead the group and can assure advancement if they draw England on Wednesday.  They stand a fair chance of moving on even without a result in that match.  France next play Mexico and will suddenly be in regroup mode after being unable to break down England or Colombia.  Notable is that the opponents employed very different tactics, England sitting deep and Colombia playing it straight up.

The result also increases the likelihood of three teams from the group reaching at least three points which is bad news for Thailand, sitting on three points in Group B and facing a date with Germany.