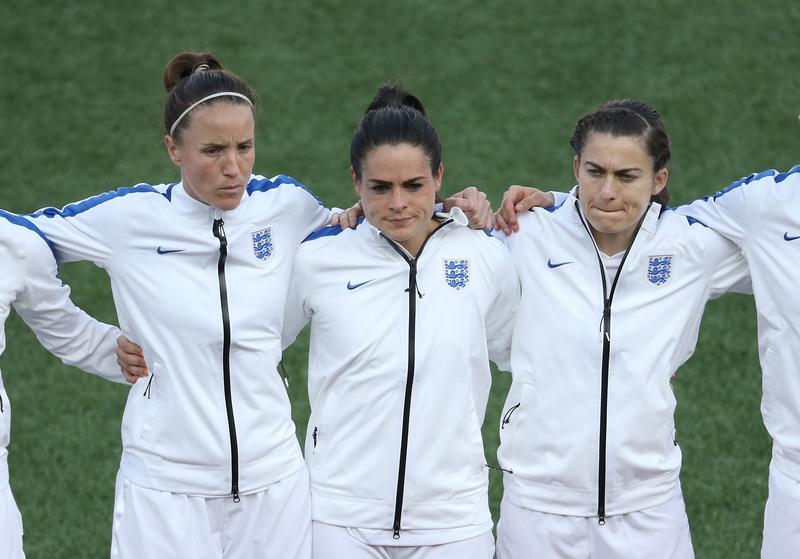 England finally broke through and beat Mexico, 2-1 putting them in good position with one group match to play (Getty Images)

It took England 160 minutes to break through with a goal but they finally got one and then two to edge Mexico, 2-1 and put themselves in a solid position with one Group F match to play.  Fran Kirby and Karen Carney scored the goals for England and Fabiola Ibarra pulled one back for Mexico in stoppage time.

Both teams were desperate for a victory and the result was a slow opening to the match.  Mexico had the best of it early before England took hold for the back end of the opening half.  The second half began with England pushing forward and looking the more dangerous, and things picked up even more for Mark Sampson’s side when Carney checked in to the match on 66 minutes.  Four minutes later England snapped the goalless drought.

It looked like Mexico’s defense had won the ball away from England but Kirby swooped in to collect the ball.  She then made a deft touch to take a defender off balance and finished with an equally deft toe poke that softly hit the post and trickled in.

The goal appeared to instill England with confidence, and Kirby would have scored another in the 80th if not for a sprawling save by Cecelia Santiago.  Two minutes later Carney put one beyond the reach of Santiago at the end of a beautiful England buildup.  The final pass came from the foot of 21-year old Alex Greenwood, another player who made a difference off the bench for England.

Mexico made it interesting after Charlyn Corral took on several England defenders and got off a shot.  Karen Bardsley saved it but left a rebound that Ibarra cleaned up for the 2-1 final.

England are up to three points and in excellent position ahead of their group finale against Colombia.  Mexico are likely through if they can beat France but definitely finished if they do not.