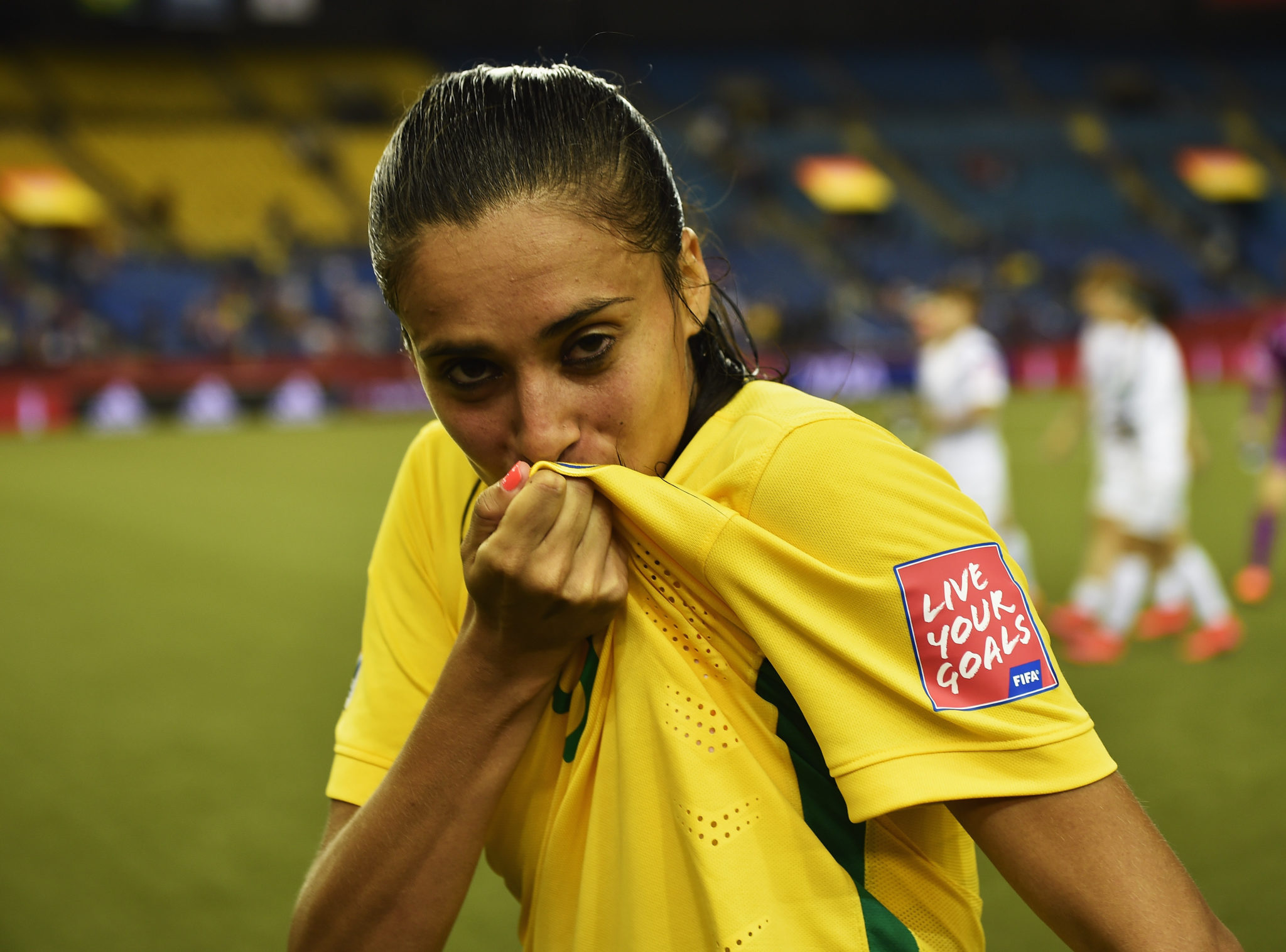 MONTREAL –Brazil defeated Spain, 1-0 on Saturday in Group E to become only the second team to join Japan as the only World Cup teams to start 2-0-0.

Ignacio Quereda’s La Rojas side started out strong, but were unable to hold No. 7-ranked Brazil. Andressa Alves scored just before the half and Brazil was never really pressured against Spain. A crowd of 28,623 mostly clad in Brazilian kits watched an anticipated matchup between Marta and Vero Boquete, with Women’s World Cup all-time leading goal-scorer getting the advantage on this occasion.

Marta talked about the importance of booking a spot in the final sixteen.

“It was a good game, it was an important game,” she said. “We needed a win and we also wanted to classify. It was a good game. The first part, we were holding them up, they were kind of coming on the attack and then we got our goal. Then we were able to hold on to our win until the end.”

Brazil coach Vadao was pleased with how his team was able to pick up their play and getting going after a first half that was all over the map for both teams.

“The first half was very broken from both sides, the second half was much better. The first half Spain did very good and made life difficult,” he said.

Brazil top Group E with 6 points and will close out the group stage with a match vs. Costa Rica on June 17 in Moncton. Spain will go into their match with Korea Republic with a single point in what will be considered a must win match.

Quereda lamented his teams frustrating and lack of scoring against Brazil.

“I think it was a very intense match, very balanced,” Quereda said. “That was a very economic goal. We tried to remedy it. The only thing I didn’t like, is we couldn’t score. It seems like we have no luck when it comes to scoring. Don’t forget that we had an amazing team playing against us.”

Spain controlled the opening 20 minutes of the match. Brazil was forced into sloppy turnovers and given little time and space to get going. Natalia Pablos had a terrific 1-v-1 opportunity with Luciana, however her shot attempt was well wide of the target.

“I think that Spain did a good game,” she said. “We played against one of the best teams in this tournament, Brazil. We had some possession, especially in the first half and we created some good chances. They scored on one of our few mistakes. Maybe we had a little bit of bad luck in front of goal, but the team did a great job tonight.”

Despite only scoring one goal from two matches. Boquete and her teammates are not worried about chances created. The belief is still with La Roja’s. The main focus against Korea Republic will be to score goals.

“We could be frustrated or worried if we don’t create those chances, but we have to believe in our game. We have to still believe in this team. The other day vs Costa Rica and today vs Brazil. We have a really good ones and we just have to put it in. That will be our goal for the next game and we will be so focused on that.”

The tight man-marking from Spain produced a pair of rash challenges in the midfield. Marta was taken down by Leire Landa, and Andressa was sent tumbling after Virginia Torrecilia got her foot in. The first foul warranted a yellow from Canadian referee Carol Anne Chenard.

Brazil was having difficulty breaking down Spain and getting the ball across midfield in the first 30′ minutes of the match. Offensive chances were hard to come by for both teams. A pair of corners late in the half helped Brazil pick up momentum and an eventual goal in the 44th minute.

Rafaelle delivered a beautiful ball over the top of the Spanish defense. Andressa Alves raced towards the ball with goalkeeper Ainhoa Tirapu also coming to get the ball. Alves poked the ball past Tirapu. The ball seemed to be headed for the back of the net. Celia Jimenez was able to slide and clear the ball away momentarily. With Tirapu and Jimenez out of position. The 22 year-old Alves made no mistake to give Brazil the advantage heading into the interval.

From her position in central defense, Rafaelle was unable to see the Andressa Alves goal unfold. She made a brilliant pass up the pitch and was left to think positive thoughts as it looked like Jimenez would rescue the ball from going in. Rafaelle wasn’t quite sure what was happening in front of goal.

“I was scared because I was playing at defense,” Rafaelle said. “I could not see from that close, but I was hoping that the ball was going to go in. I don’t know, I just prayed and the ball goes over the line.”

The Alves goal gave Brazil a spark and a boost of confidence. Vadao watched as his players took control and started to press and pick up the tempo vs. Spain. Andressa Alves looked to add a brace in the 54th minute. The Brazil buildup found Alves all alone on the flank and she fired a rocket that just missed finding a home in the top corner.

Vadao insists that he will rest some of his players for Brazil’s final group match against Costa Rica. Fabiana will not play and Thaisa is also likely to sit out. Marta talked about playing conditions in Montreal and the adjustment of turf surfaces.

It was a role reversal for Spain after the break. Brazil kept the ball well and whenever they did lose possession, they were quick to regain it. Boquete, Losada, Putellas, and Pablos struggled to receive  the ball and move forward. Brazil settled in and was happy to hem La Rojas deep in their own half.

With the match opening up for Brazil, more opportunities came for the favoured Brazilians to add to their lead. Marta found Andressa who fired a lovely ball that forced Tirapu to tip the shot over the bar. Spain had to come up with multiple clearances as Marta started to find her teammates in and around goal. The Brazilian side plays a fantastic style of football and it’s not just about stopping Marta. Brazil can hurt you with several other players. Does Marta feel the pressure to carry Brazil?

“No, it’s not just Marta,” she said of herself. “It’s a whole team. Obviously it’s the Brazil team and it can’t just be on me. Everybody plays just as well and everything has to do with the team itself.”

A team like Brazil can turn on the offense with a flick of a switch. They don’t need many opportunities to find a goal. Against Spain it took them a half-an-hour to get right into the match. Andressa Alves’s goal changed the complexion of the match and Spain was not able to recover and counter with a goal of their own. Brazil was better and took all three-points.

England edge Mexico, 2-1 on goals by Kirby, Carney
Women’s World Cup — what we learned on Day 8