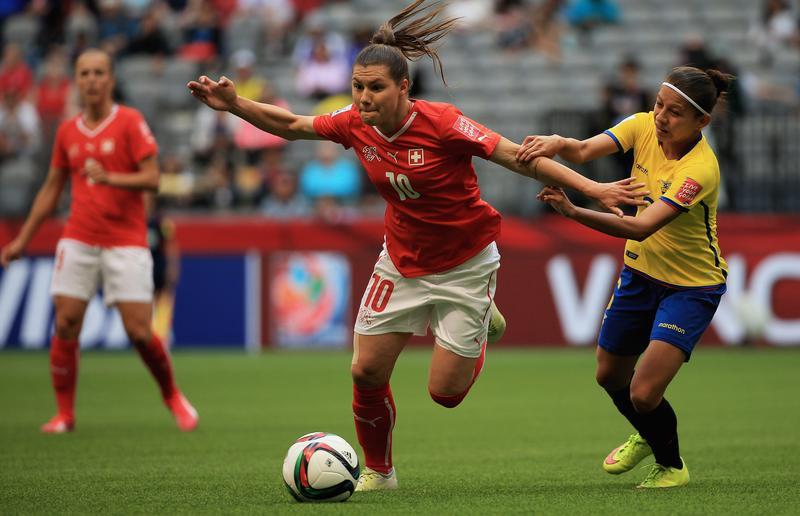 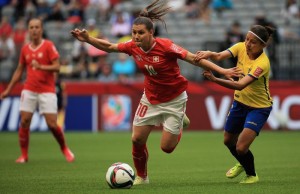 Switzerland poured it on in the second half to earn the country’s first ever win at the Women’s World Cup, 10-1 over Ecuador.  The South American side has now been outscored 16-1 in its first two matches.  Fabienne Humm and Ramona Bachmann became the second teammates at this World Cup (Germany’s Celia Sasic and Anja Mittag) and fourth in tournament history to record hat tricks in the same game.  Humm’s three goals came in a five minute span.

Ecuador, 6-0 losers to Cameroon on Monday, held things together for much of the first half despite spending most of it in their own half.  Switzerland went ahead on a fluke goal when Angie Ponce deflected what looked to be a harmless cross into her own goal.  Even at that it was nearly a single goal deficit at halftime until shoddy defensive marking allowed Eseosa Aigbogun within three yards of goal where she redirected a cross in stoppage time to make it 2-0.

Switzerland was on Ecuador for the entirety of the second half.  Humm scored less than two minutes in, again two minutes later, and again still three minutes after that.  Switzerland then won a penalty that Bachmann converted at the hour mark, and Bachmann was able to score again almost immediately after the restart.  Following another own goal—again off Ponce, Switzerland got goals from Martina Moser and another from Bachmann to complete her hat trick.

The only bright spot for Ecuador was that 18-year old Ponce scored the country’s first Women’s World Cup goal on a penalty kick.

Switzerland will move on to face Cameroon in what will be one of the more intriguing matches in the final round of group play.  Ecuador face a date with world champion Japan.