Women’s World Cup — what we learned on Day 6 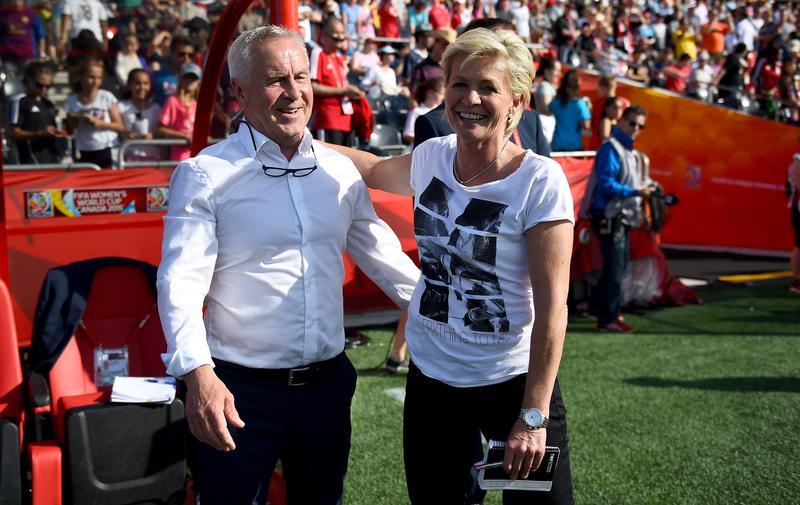 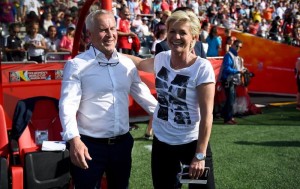 Coaches Even Pellerud (left, Norway) and Sylvia Nied were all smiles after a 1-1 draw Thursday in Ottawa. (Getty Images)

When I began coaching girls soccer more than a decade ago, one of the first books I grabbed on the subject was “Even Pellerud on Coaching and Leadership in Women’s Soccer”.

Pellerud had coached Norway to the 1995 World Cup title and was fresh off a remarkable 2003 semifinal run with Canada (where the Canadians led Sweden through 78 minutes before falling 2-1). Like the style of play he advocated, the book was very direct, saying the key to winning in the women’s game was about having superior athletes, being in the best physical condition, and – above everything else – putting pressure on the opponent all over the field (it was very similar to the mentality of an early U.S. coach, Anson Dorrance, who wrote a piece for the book as well).

As the years passed and I became more experienced, Pellerud’s ideas seemed more and more antiquated. They promoted an ugly style of play and were pretty sexist in many ways when it came down to it. Despite the success on the field, eventually Pellerud wore out his welcome in Canada, ended up coaching Trinidad and Tobago for four years, and seemed like he might drift into the sunset until Norway, who failed to get out of the group stage for the first time at a World Cup in 2011 (while trying to play a style with more possession), brought him back with open arms in 2012.

Somewhat amazingly, the results followed as Norway made it all the way to the final of the 2013 European championships (losing to Germany) and rolled through 2015 World Cup qualifying with just one hiccup against the Netherlands.

Still, Thursday looked like the day where Pellerud might finally get some more comeuppance against a Germany team that, quite frankly, made his team look silly in the first half, taking the first 17 shots of the match. It didn’t matter how physical or athletic Norway was, they couldn’t sniff the ball, Germany was almost teasing them at every turn.

But it was only 1-0 at the half and a funny thing happened. Pellerud had seen that Gry Tofte Ims just couldn’t keep the ball, and replaced her with veteran Solveig Gulbrandsen, who had retired five YEARS ago (while in WPS) and – now at the age of 34 – is likely not as athletic or physical. With a slight tweak of formation, suddenly Norway at least had a toehold on the game, Germany was not able to go through them at will, and thanks to a perfectly placed free kick by Maren Mjelde, Norway was able to grab a point against what appear to be the tournament favorites.

Yes, they were out-shot 27-4 according to FIFA, but by the end, Norway was able to get up to 48 percent possession, and if you watched the game, they certainly deserved a point from their second-half performance. Much of the credit has to go to the wily veteran Pellerud, who made the correct adjustments both tactically and psychologically.

And so, for Thursday at least, I tip my cap to you, Even Pellerud. Unfortunately, my copy of his book has long since gone to book heaven.

What else did we learn Thursday in Groups A and B?

Canada are likely through:  Two games in to their home World Cup, Canada have yet to look particularly good and have not scored from the run of play.  But by drawing New Zealand 0-0 the Canadians now have four points and thanks to a generous formula for advancing and the way other groups are shaking up that is very likely already enough.  They have already clinched a top three spot in Group A and among other scenarios, they will advance if Germany draws or beats Thailand and neither England not Mexico beat France or England.  Other scenarios apply as well, but for all intents and purposes Canada will play at least one knockout match.

Germany is not invincible:  In a way, that’s not the worst thing at this stage for Germany. It’s easy to forget that the Germans were 14-0-1 (including two titles) in their last 15 matches leading up to the shocking loss to Japan in the 2011 World Cup quarterfinals. They didn’t qualify for the Olympics thanks to UEFA’s lack of a qualifier, won the 2013 Euros (although they did lose to Norway in the group stage), and then rolled through 2015 World Cup qualifying without really being tested. They won’t be tested against Thailand, will probably win their second round game easily, and then will likely face France in the quarterfinals (which will be a shame, but it is what it is). So a little humble pie at this stage might not be the worst thing in the world going forward.

Live by the spot, die by the spot:  As I watched Canada’s tournament-opening win over China after the fact, the result already known, I could not help but think about how much pressure suddenly fell on Christine Sinclair’s shoulders when she stood over the stoppage time penalty.  After four years of buildup and 90 minutes of sweat, the fate of the opening match rested on her foot.  Sinclair converted.  The stakes were not quite as high for New Zealand’s Amber Hearn since her turn at the spot was only a third of the way into Thursday’s match.  But Hearn, New Zealand’s all-time leading scorer, missed.  Her spot kick rattled off the crossbar–a piece of wood that had a particularly busy night–and an hour later the Ferns were still looking for their first ever World Cup win and first goal of the tournament.  Everyone misses penalties but Hearn will long rue that one of New Zealand are unable to beat China which they must do in order to progress out of group play for the first time.

The road not taken:  “It is what it is,” but Norway and Pellerud have to like how this is setting up for them. Barring a miracle, Germany will finish first, Norway second, which will likely give Norway a match-up with England, who looked lifeless in its opener. It would then set up a possible quarterfinal with host Canada, who also hasn’t looked stellar through two matches, and based on karma alone, Pellerud has to like his team’s chances. Even then, Germany, France, and the United States will all be on the other side of the bracket. Maybe karma is paying it forward for the Caroline Graham Hansen injury as well.

Sloppy finish for Netherlands: China’s stoppage-time goal stands out as the highlight moment of the 1-0 win over the Netherlands, but there should be an awful lot of head scratching at Dutch headquarters as they prepare to finish the group against Canada.  For starters, they appeared to set up tactically as if they were okay not scoring against an admittedly stingy Chinese defense.  But the goal sequence was a study in poor discipline and shape.  First they allowed China loads of room and space in the middle of the park.  That is not the worst tactic especially on tired legs, but in doing so it implies tight marking and aggressive defending further back.  Instead the Netherlands defense allowed a switching ball to be played to Wang Lisi at which point communication appeared to break down between defender Merel Van Dongen and keeper Sari Van Veenendaal.  That was more than enough for Lisi to finish and leave the Netherlands teetering on three points.  So now the Netherlands will go into the Canada match knowing they need at least a draw or help on the scoreboard to get to the last 16.

Joy for Thailand, heartbreak for Ivory Coast:  My immediate reaction after the wild and entertaining (if not very well played) 3-2 win by Thailand over Ivory Coast was disappointment for the Ivorians. As I said after the Germany match, I think they’re better than they’ve shown, but the lack of defensive organization (even if two of the goals were clearly offside) and goalkeeping were just too much to overcome, even if they were the more talented team. But on the other hand, what a moment for Thailand. Four-foot-11 Orathai Srimanee has played more futsal than soccer in her career, but scored her first two international goals to lead her country to victory. If Thailand is able to miraculously advance, who knows what this could mean not just for women’s soccer, but soccer in general in Thailand.