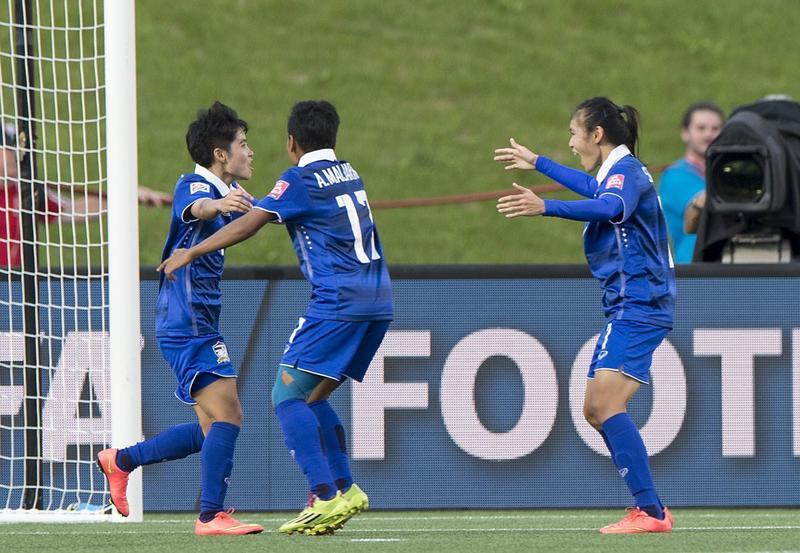 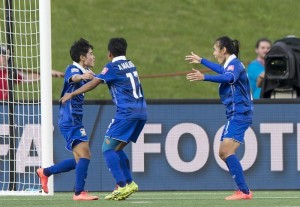 Orathai Srimanee’s first two international goals were the first two World Cup goals for Thailand and they lifted the Changsuk to an historic, 3-2 victory over Ivory Coast on a big day for Asian women’s soccer.  Adding to Srimanee’s delight is that it was already Friday in Thailand—her 27th birthday.  Srimanee’s replaecement, Thanatta Chawong, promptly added the third goal for the Thais.  Ivory Coast struck first and last and hit the cross bar near full time but were unable to come up with their first World Cup point.

The three points for Thailand puts them in position to advance if things break their way in other groups or if they can get a miraculous result next week against Germany.

The two World Cup minnows had been routed by an aggregate 14-0 by Germany and Norway, but neither team ever had anything on its mind by to go forward.  There were immediate rewards for Ivory Coast when Thai keeper Waraporn Boonsing could not get a good punch on an Ivory Coast corner kick.  The ball was sent back towards the top of the six and remained loose until Ange Nguessan poked it home for the first ever Ivory Coast goal at a Women’s World Cup.

Thailand equalized in the 26th minute when a direct ball caught the Ivory Coast defense way out of shape.  Anootsara Maijarern ran onto it down the left flank and crossed it to Srimanee who headed it in.  From there it looked like halftime would find the teams level, but Thailand struck again in the third minute of stoppage time.  This time the play went down the right and it was Rattikan Thongsombut who made the cross to Srimanee.  Ivory Coast keeper Dominique Thiamale made a poor run off her line as it did not prevent the attacker from getting her head on it.  The ball went in off the crossbar as indicated by the goal line technology that is being used at the Women’s World Cup for the first time.

The lead doubled in the 75 minute although it was a play that should have been whistled dead for offside on the initial ball into Maijarern.  Offside or not, Thiamale got caught in no-man’s-land when she came to her left to try and get to it only to have Maijarern dribble away from her.  Thiamale then failed to get a touch on the weakly hit cross and Chawong got on the end of it for the 3-1 lead.

Ivory Coast never stopped pushing for the draw.  Josee Nahi pulled one back in the 88th minute but the Super Falcons could never find the third goal.  The match though, literally came down to the final second when Boonsing reached out and snagged a rebound with Nguessan bearing down for what would have been a tap-in equalizer.

Thailand finished group play against Germany while Ivory Coast will try their luck with Norway.