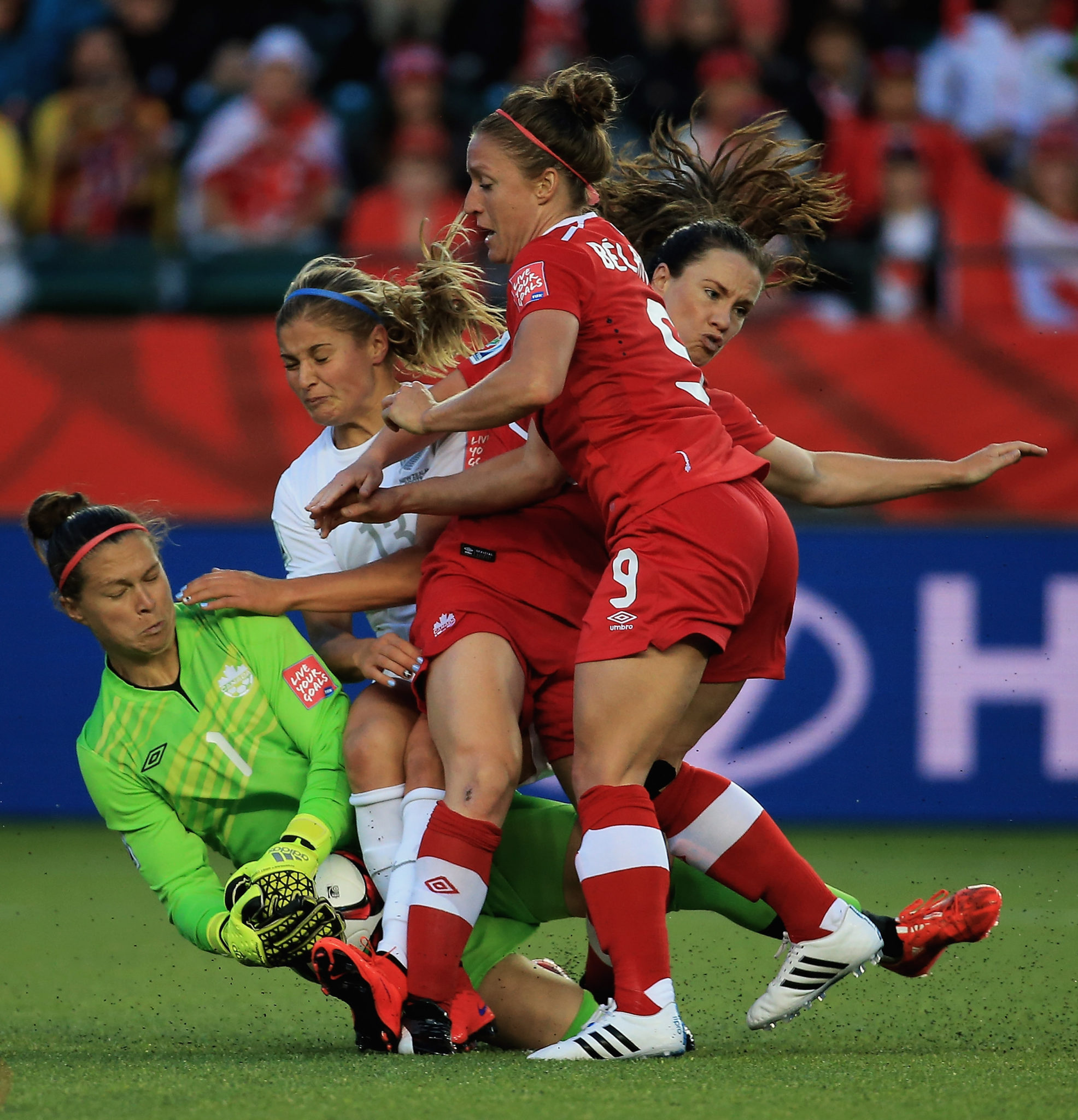 EDMONTON, Alberta – Canada and New Zealand played a fast-paced match but ended in a 0-0 draw on a slick surface at Commonwealth Stadium on Thursday.

The match had to be halted four minutes in as rain poured down and thunder and lighting were heard and seen in the distance. The crowd of 36,544 spectators left disappointed after the scoreless draw, but Canada still sit atop Group A at the 2015 Women’s World Cup.

New Zealand Amber Hearn hit the crossbar on a New Zealand penalty in the 33rd minute, and Christine Sinclair and Sophie Schmidt also found the bar in the second half. Both goalkeepers — Erin McLeod and Erin Nayler — came up big for their teams.

“We kind of knew New Zealand was going to come out with a high press and it was going to be kind of a very chaotic game,” McLeod said. “I think considering that, we tried to keep our calm as much as we could. We tried to play around as much as we could and I think we did pretty well. We didn’t build up as much as normal out of the back. Mostly because that’s one of their strategies, to take advantage of that. I thought we varied it up, I thought we had more final acts than we’ve had in the previous game. Now we just have to start putting them away.”

Canada now sit at the top of Group A with 4 points, followed by China and the Netherlands with 3 poiints. New Zealand have 1 point.

Canada coach John Herdman, who managed New Zealand from 2006-2011, said prior to the match that Canada is a better team than New Zealand.

“I think regardless of what he says, you want to stick it to him anyway,” New Zealand captain Abby Erceg said. “Anytime you have an old coach going to a different team you just want to prove a point. Like I said, I think it was a fair result today. Obviously we’re out to win and we just couldn’t make it happen. We’ll have to wait until next time.”

Herdman was pleased with how his team performed. The defense for Canada was solid. Once again, scoring goals is something Canada can’t seem to do. For Herdman, their are more positive signs and it’s not all doom and gloom for Canada.

“I’m not going to protect the team, but the stats don’t lie,” Herdman said. “That was a decent performance from Canada. Don’t underestimate the opposition in our group. The women’s game has moved in a big way. You watch China today, completely dominate the Netherlands. The gaps aren’t the same that they use to be. We scouted New Zealand and Wilkinson didn’t get in that pocket. She didn’t score tonight, she got substituted. We dealt with that. The direct play, we knew it was coming. The free kicks and the corners, that’s what we had to deal with. I thought we defended resolutely tonight. We’ve only conceded three shots on target in two games. Two clean sheets. If our front five can start finding the back of the net, this Canada team is going to be decent.”

Coming out of the weather delay, New Zealand looked to be the sharper team. A Kadeisha Buchanan foul earned the Football Ferns a dangerous free kick in the 11th minute. Hearn was able to connect and send a dangerous header on goal, but Erin McLeod did well to push the ball over the net for a New Zealand corner. The Kiwis also had a free kick that threatened Canada.

Canada had a brilliant opportunity to open the scoring with a quick transition and teamwork. Melissa Tancredi fed Sophie Schmidt, who sent a cross into the New Zealand box. Jonelle Filigno forced Erin Nayler to come up with a diving save. Moments later Nayler came up huge and denied Sinclair after Ashley Lawrence sent the skipper in 1-v-1.

“It was a physical battle out there,” Sinclair said. “I thought that we created a lot of chances and we couldn’t put one away. I think we gave them a few too many chances in terms of set plays. We knew that was probably going to be the only way they were going to score against us. I think we were a little careless sometimes.”

A Buchanan turnover forced Allysha Chapman into a bad spot just past the half-hour mark. Chapman got a piece of Hannah Wilkinson inside the Canada box and referee Bibiana Steinhaus pointed to the spot without hesitation. Hearn stepped up and promptly fired the ball off the crossbar. Erin McLeod was beat, but the woodwork bailed out Canada and cost New Zealand a vital goal.

New Zealand controlled much of the opening 45 minutes and Tony Readings’ side was unlucky not to have found a goal in the final third. Canada weren’t able to get forward often enough and turned the ball over in the midfield, thus allowing New Zealand to get going on a counter-attack play.

Sinclair had her volley saved by Nayler and subsequently tipped off the crossbar after both teams returned for the second half. New Zealand also came close to scoring thanks to an attempt from Hearn that almost found the net.
Canada had a lot more possession, urgency and shape in the second half.

The crossbar challenge was on full display once again in the 70th minute, when Sophie Schmidt had her free kick strike the bar. Each side was getting desperate in search of a goal and the possibility of all three points. Herdman quickly used all of his substitutions in a span of 10 minutes. Kaylyn Kyle, Carmelina Moscato, and Adriana Leon entered the match for Filigno, Sesselmann, and Scott.

The trio of changes helped Canada create more offense despite not scoring. Tancredi came in off the left flank and had a tremendous opportunity to blast the ball past Nayler, but the New Zealand keeper was once again up for the task and stopped Tancredi point-blank.

Canada can win the group with a win over the Netherlands on Monday, but Canada hasn’t scored from open play this tournament. The hosts will have to do better in Montreal next week and beyond if they are going to become a serious contender to win the World Cup.