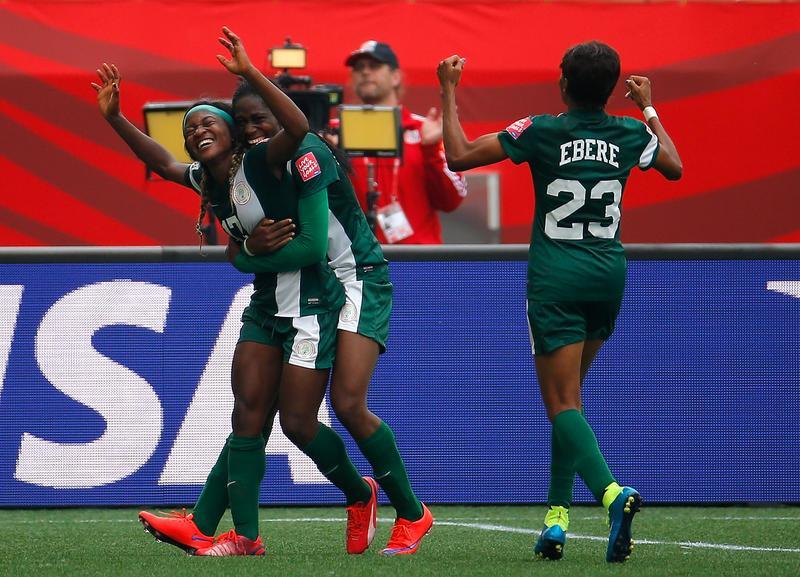 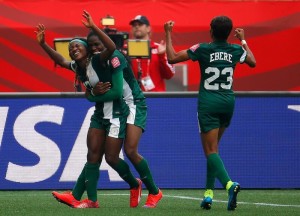 Nigeria rallied late to snatch a point in a dramatic, 3-3 draw against Sweden (Getty Images)

Heading into Monday’s action, the continent of Africa was 4-25-3 in World Cup play, the last two of those victories (including Nigeria beating Canada in 2011) coming after both teams involved in the match had already been eliminated.

The reasons for the slow growth of African women’s soccer has to do with some of the socioeconomic and cultural reasons I mentioned Sunday. And if it has been difficult for men’s teams from Africa to find their footing on the world stage, you can imagine how hard it is to get funding, respect, common decency, etc., for their women’s teams.

But, if history has taught us anything, it’s that talent finds a way to shine through barriers. Yes, Nigeria did not advance in 2011, but they only conceded two goals in the tournament, while Equatorial Guinea and Genoveva (Ayo) Anonma went home 0-3, but certainly not outclassed the way African teams had been in the past.

Perhaps you can write down Monday, June 8, 2015, as the date when African women’s soccer finally arrived on the world stage. For the first time in 16 years, the continent got four points in a World Cup, and not only did Cameroon and Nigeria do it within hours of each other, they did it impressively. Admittedly, Ecuador was poor and eventually down to 10 women, but Cameroon was rampant almost from the opening kickoff in a 6-0 rout (no other African victory at the World Cup had ever been by more than two goals).

Meanwhile, Nigeria came from two goals down to draw 3-3 with Sweden, but – despite the reaction of the world as the result being a surprise – likely deserved all three, recording more possession, twice as many shots, and much better chances with a front four of Asisat Oshoala, Ngozi Okobi, Francisca Ordega (of the NWSL’s Spirit), and Desire Oparanozie making Sweden look ordinary. And “ordinary” is being generous.

In 1999, Nigeria beat North Korea and Denmark and came from three goals down against Brazil in the quarterfinals only to have Sissi win it in overtime on a golden goal. Had Nigeria won that game, it would have played the U.S. in the semifinals. So somewhere Mercy Akide (now coaching in Virginia and married to Nigerian sportswriter Colin Udoh) and the other foremothers of the current African generation had big smiles Monday night.

There’s obviously much of the tournament to go, but Cameroon has likely qualified for the second round already with 3 points and its goal differential. Nigeria would have liked 3 points with the U.S. and Australia remaining, but will be far from a pushover for either. And don’t be shocked if the Ivory Coast – who actually looked decent going forward against Germany – finds a way to beat Thailand and join them in the knockout stages.

What else did we learn Monday?

She doesn’t turn 21 until October, but has already been the BBC Women’s Footballer of the Year thanks to her dominance at Liverpool and was voted the best player in Africa last season after winning the Golden Boot at the 2014 U-20 World Cup as Nigeria lost to Germany in extra time in the final. She has pace, strength, size, and skill, and Sweden had no answer for her. Ngozi Okobi may also get some looks from Europe if she continues to torture defenses like she did Monday.

2) However, Nigeria does have a goalkeeping issue

Precious Dede has played for Nigeria in almost every big match they have played since 2003, but shaky doesn’t begin to describe how she looked in the first half against Sweden set pieces (of which they scored on two corners). Edwin Okon does have 23-year-old Ibubeleye Whyte as a back-up and she did post a clean sheet in the African finals last year (against Cameroon). However, she only has six career caps, and it would be asking a lot to put her up against the Abby Wambachs of the world in the air. But Nigeria has to figure that out or all their hard work and young skill won’t help them advance.

3) Meanwhile, Sweden has a defense problem

Pia Sundhage was so scared by Nigeria’s speed that she replaced BOTH center backs (Nilla Fischer and Emma Berglund) while leading in the second half. It didn’t work. Replacement Linda Sembrant (who also scored Sweden’s third goal) stepped way too early, allowing Ordega to tie the game in the 87th minute. Sweden allowed only one goal in 10 games of UEFA qualifying, but that is deceiving because they were in a turrible (as Charles Barkley would say) group, and one certainly devoid of the speed they saw Monday (with apologies to Scotland’s Jane Ross). With the U.S. and Australia coming up, things won’t get easier on that front, so Pia will have to do something, or Sweden could be facing an extremely embarrassing first-round exit if they’re not careful.

4) Gaelle Enganamouit may not be too far behind Asisat Oshoala

The 23-year-old who plays in Sweden looked the part of a world-class striker in picking up her hat trick, even if the competition was dreadful (if I had another bullet point, I could muse about how far South America has fallen behind Africa in women’s soccer because the gap looked pretty significant on Monday, and no team from South America other than Brazil has ever won a match at the World Cup). Japan and Switzerland both looked very good in their opener on Monday and both will pose many more problems for their defense, but it would be surprising to see them get beaten as badly as they beat Ecuador Monday.

This may be Switzerland’s first World Cup (and they’ve never even qualified for the Euros), but their roster is loaded with players from the top European leagues (including 11 from the Bundesliga). Rightfully so, Ramona Bachmann will get a lot of the press after Monday’s game (and boy does she wish she has that chance in stoppage time back), it’s great to see her finally healthy and that obviously makes the Swiss a much tougher out in this tournament. But veterans Martina Moser and Vanessa Bernauer (both of whom play in Germany) more than held their own in the middle against the defending world champs. Alas, they got no points for their troubles, but given the weak group they’re in, there is reason to take a lot of positives out of the 1-0 loss.

Three things learned: US finds a way vs. Australia
Even on off day, US shows why it will contend