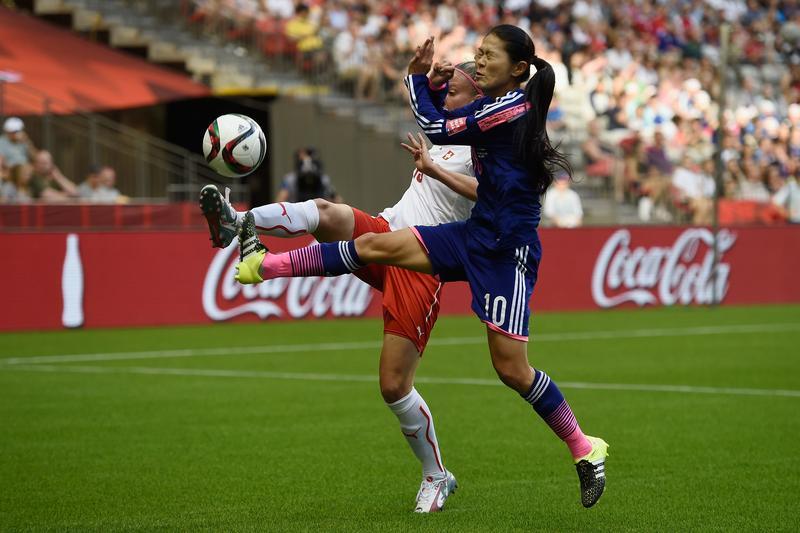 VANCOUVER, British Columbia – The third day of World Cup competition belonged to a pair of African nations. The Super Falcons of Nigeria came up with a surprising 3-3 draw vs No. 5-ranked Sweden and Cameroon thrashed Ecuador 6-0 at BC Place in Vancouver. Gaelle Enganamouit scored the first hat trick of any African team in Women’s World Cup history.

The World Cup has always featured teams from Africa with the hope that one day a country from the continent could go on a long World Cup run. It hasn’t quite happened in a men’s World Cup, yet. The performances from Nigeria and Cameroon have both shown great promise and a terrific step in the right direction towards a CAF team succeeding further at the World Cup.

Monday’s results left Cameroon coach Enow Ngachu not quite ready to believe that a team from Africa can go on and cause serious damage at the World Cup. He would prefer to play out the group stage and see what happens.

“It’s too early to predict,” Ngachu said. “I think it is a positive sign. Our main objective was to perform better than 2012. If we can create surprises it will be good for us.”

Gabrielle Onguene had a goal and assist against Ecuador. She was a force all evening. The 26-year-old striker had fantastic chemistry with Enganamouit and caused all sorts of trouble for the inexperienced Ecuadorians. Onguene was shocked to learn the scoreline of the Nigeria-Sweden match. At first assumption, she assumed Nigeria had lost.

Cameroon currently sit top of Group C based on a goal differential of plus-6. Only No. 1-ranked Germany have scored more goals than the Lionesses of Cameroon. In their first World Cup match, Cameroon controlled the match and left Ecuador in the dust. Ngachu was extremely happy to see his side play well and show that they can compete as an underdog at the World Cup.

“We’re satisfied with the performance against of the best teams in the world,” he said.

Cameroon will take on Japan in the next round of Group C matches on Friday at BC Place. Ngachu views Japan as the No. 1 team to beat at the World Cup. Tactically, he already knows what he would like to do against Japan and he wasn’t willing to share those thoughts with the press.

Japan, like most teams in an opening match, looked nervous in the early going. Switzerland was able to keep pace with the Japanese and get forward on a few occasions into opposition territory. Swiss forward Ramona Bachmann was by far the most dangerous player on the pitch for either side. Japan was able to earn a 1-0 win over the debutante Swiss. Bachmann had chance after chance to breakdown the Japanese defense and score a goal. She was understandably frustrated by the outcome of the match.

“Yeah it’s disappointing now after the game because I think over 90 minutes we were the better team,” she said. “We had a lot of possession against Japan which is the World Cup Champion. That means a lot for us to know. We were just unlucky today with the chances to not get a goal.”

Japan skipper Aya Miyama converted a controversial penalty in the first half. Swiss goalkeeper Gaelle Thalmann came out of her net to meet Kozue Ando. The Japanese midfielder took the brunt of force from the collision. Referee Lucila Venegas determined that Thalmann had intentionally fouled Ando. Later in the half, Ando left the match and limped off the field.

Japan coach Norio Sasaki told the press that Ando was taken to a hospital to be looked at by a doctor. It is not known what injury Ando may have suffered.

Japan won’t be able to sneak up on opponents at this year’s World Cup. Opposition teams will have scouted and prepared well in advance for what Norio Sasaki’s team does so well. Japan is still the favorite to win Group C. Japan controls the ball, passes brilliantly and can slice through the back-line of opponents, even if the Nadeshiko didn’t quite do that against Switzerland. Sasaki sensed his team never really got down to playing at the capable level Japan is known for.

“We were too simplistic. I wish we had played in a cooler manner,” he said.

Even at reduced top level showing, Japan is still a top contender and a team that nobody want to play against. Aya Miyama, Homare Sawa, Yuki Ogimi, Nahomi Kawasumi and Shinobu Ohno are all top caliber players that can carry Japan on any day.

Striker Yuki Ogimi talked about how difficult it was to playing Switzerland.

“It was so difficult, they had a lot of good possession,” she said. “In the second half we couldn’t have ball possession so we played always defensively. I thought they were so nervous. In the first half they played more athletic, but they didn’t score. It was lucky for us.”

Playing against Cameroon will offer a completely new challenge for Japan because they’ve never faced Cameroon and have very little information to go on. Sasaki watched the Cameroon against Ecuador match and will make sure his team is ready on Friday.

“We have prepared our plan. We will be prepared for that,” he said.