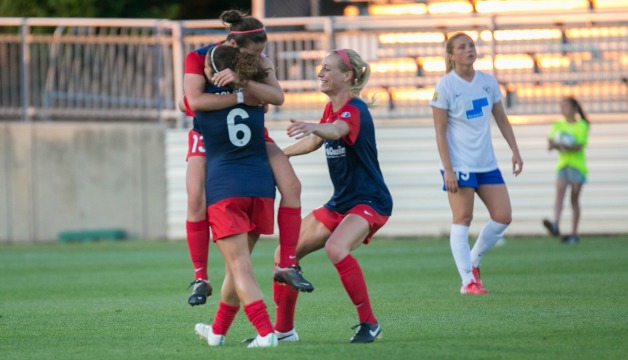 With a chance to move into first place, the Washington Spirit settled for a 1-1 draw against the visiting Boston Breakers Saturday. For the second time in as many games, Amanda Da Costa found the back of the net for the Spirit. Maddy Evans quickly answered for the Breakers.

Perhaps the most surprising streak to end Saturday was Crystal Dunn’s points streak. For the first time in 8 games, the league’s leading scorer failed to record a goal or an assist. Dunn’s absence from the scoresheet was not from a lack of opportunities though. The North Carolina product put the Boston backline under pressure several times but her shots were harmless, either off target or easily stopped by Boston’s Jami Kranich.

Wasteful would be the best word to describe Spirit’s offense in the first half. The Spirit held a decisive advantage in possession but could not find the back of the net. They either failed either connect on the final pass or failed to test the keeper when they did.

However, the Spirit did manage to create dangerous opportunities which is something they’ve struggled with at times this season. The team exploited the width of the field through outside backs Katherine Reynolds and Whitney Church better than they had previously.

Dunn had the first real dangerous opportunity of the game in the 19th minute when she managed to get around two defenders but her shot fell harmlessly to Kranich. Two minutes later, Dunn would get the better of Boston’s Mollie Pathman in a 1v1 situation, but once again Kranich made the save.

Dunn was not the only Spirit player to have chances fall by the wayside. Joanna Lohman had several chances on the night as well but was not able to convert. In the 40th minute, she was played in behind the defense but her first touch took her away from goal, thus taking away the most dangerous angle.

Boston was kept at bay throughout much of the first half. Kristie Mewis had the visitors’ best chance in the 39th minute, when she launched a long range rocket that hit off the post.

The Breakers came out stronger in the second half and controlled more of the game. Adjustments the team made at half proved to be fruitful.

“We changed our line of confrontation a little bit,” Boston’s goalscorer Maddy Evans explained, “We had to change where we were we starting to put our pressure on and kind of organize a little bit better in the midfield to make sure we all knew exactly where we were going, came out with a little bit different mentality.”

The game’s only goals came in quick succession midway through the second half and were of the unassisted variety. The Spirit struck first in the 64th minute. Amanda Da Costa collected her own deflected cross and released a shot that found it’s way past Kranich. A minute later, Evans equalized for Boston when her shot deflected off a Spirit defender and into goal.

The Spirit had a couple of chances to regain the lead. In the 83rd minute, Dunn did well to get around Julie King but then took a weak shot the was gobbled up by Kranich.

Three minutes later, Christine Nairn took a long distance shot with enough power that Kranich couldn’t stop it cleanly. She did manage to cover it up before Laura Del Rio could pounce on the rebound.

In the 90th minute, Mewis came close to notching another late game winner for Boston. She launched a powerful rocket from about 25 yards out after the Breakers were awarded a free kick.

Washington head coach Mark Parsons thought despite the lack of finishing there were good takeaways for his side.

“If we have games like that every single week, then we’re going to win more games than we’re going to tie and we won’t lose games,” he said, “Let’s focus on it was great, they way we moved the ball. I don’t think they ever solved the problems that we created. I just think we lacked a bit in front of goal. That’s not a bad problem to have creating all those opportunities and being frustrated at finishing. We can work on that. I think we’re in a really good place defensively; I thought we were strong, offensively we were strong.”

Parsons’ counterpart Tom Durkin said he was satisfied getting a point on the road.

Both sides also seem ready for the Women’s World Cup break. Durkin admitted that his side was “huffing and puffing” and hadn’t looked so tired since preseason. The Spirit meanwhile haven’t had a bye week yet this season and Amanda Da Costa that she and her teammates need the break to recharge.