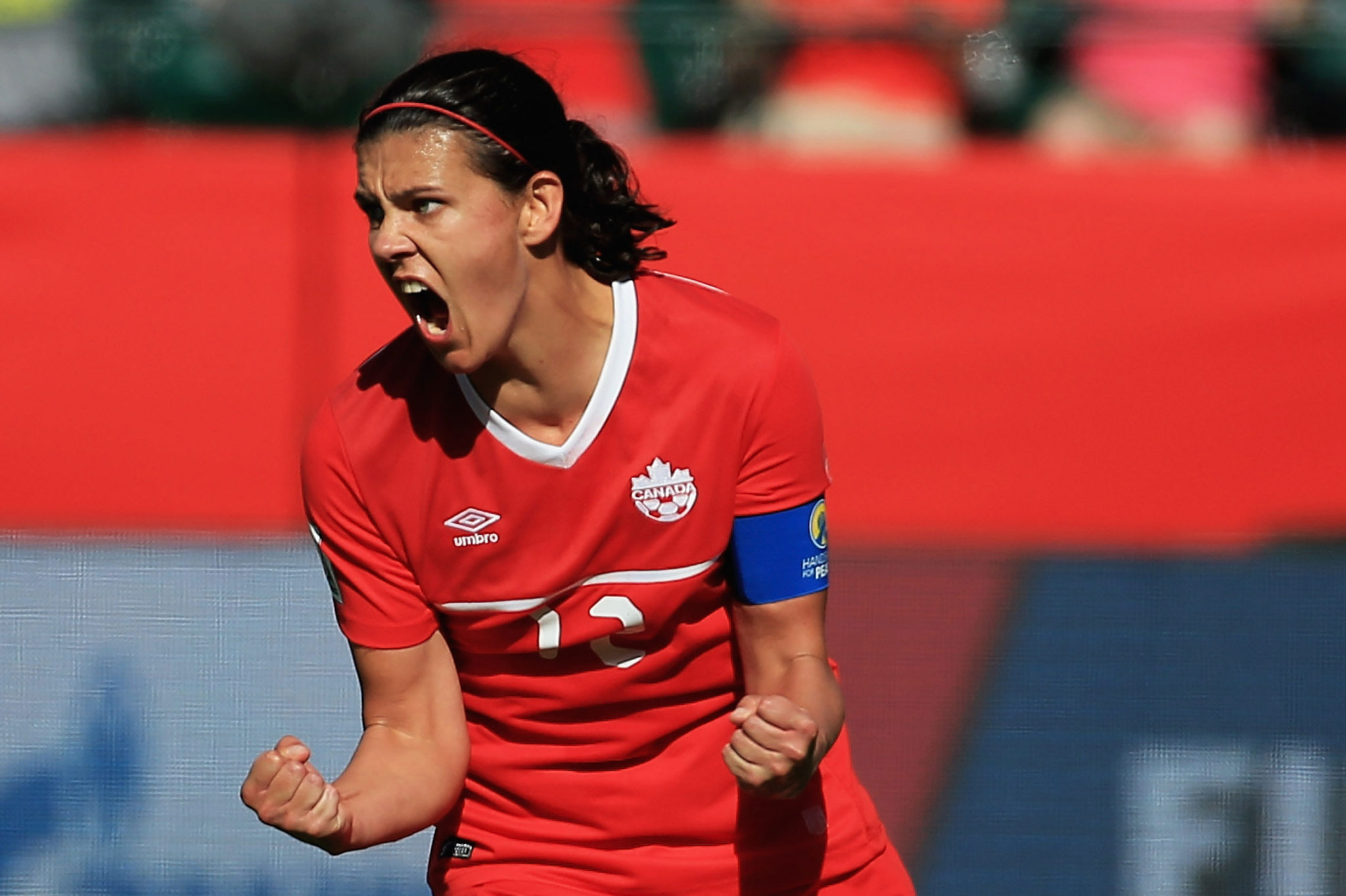 EDMONTON, Alberta – Hosts Canada kicked off the 2015 FIFA Women’s World Cup with a 1-0 win over China in front of a packed crowd of 53,058 rabid fans at Commonwealth Stadium. The hosts carried the momentum from the spectators and earned a penalty in second-half stoppage time and captain Christine Sinclair stepped up to finish.

Canada created the majority of scoring opportunities and held the possession advantage. Adriana Leon earned the late penalty after taking a forearm to the face from a Chinese defender.

“Yeah it was a frustrating game,” Sinclair said. “We knew heading into the game that China, their going to be a tough team to breakdown. They tend to drop off and sort of let the other team have the problem of possession. We created some good chances, we didn’t finish them and the pressure sort of started to mount. A great result for us. I felt like they were waisting time from the kickoff. Playing for a tie so it was nice to get one in the back of the net at the end.”

Canada attacked China right from the first whistle. Sophie Schmidt’s early free kick from the left flank found Kadeisha Buchanan open near the far back post. Buchanan had a pair of shots on target that goalkeeper Wang Fei was quick to save.

Sinclair broke through the young China back-line and fired a tough shot on target from a difficult angle. Wang Fei was again in great position to turn aside Canada. The Red clad Canadians controlled the opening 15 minutes of the match.

China almost caught Canada and specifically, Lauren Sesselmann, napping in the 18th minute. The usually sound center back coughed up the ball to Gu Yasha in the Canada box. An alert Erin McLeod came rushing out of her net to stop Gu before she could shoot or pass to her wide open teammate. The Sesselmann error gave China a spark and moments later they almost scored.

“I think we played nervous,” McLeod said. “We never really calmed down for most of the game, so our quality dipped. I think we’re lucky to come out with a win. We came out with 3-points and that’s what we’re going to focus on. Our goal is to be the team that grows the most throughout the tournament and we will definitely grow a lot of that game.”

China was awarded a free kick on the outside corner of the left flank. From well beyond distance, Wang Lisi stepped up and delivered a booming strike that hammered off the crossbar in the 22nd minute. McLeod leaped and managed to get a finger to the ball. Canada escaped what surely would have been a shock to the system had China capitalized from their opportunity.

Josee Belanger earned the start for Canada at right back and did not look out of place in the first 45 minutes. She was great defensively and was also able to get forward and add to the Canada attack, including a 26th minute shot off the crossbar.

The opening pace that accompanied the first few minutes of the match slowly came to a halt as both sides settled in. China looked more comfortable against Canada and the hosts continued to create chances without finishing. Heading into the half, Canada was pushing all the right buttons without finding a goal. China did well to whether the early Canada pressure.

Coach Wei Hao made his first substitution just before the interval. An injured Wang Lisi was replaced by Peng Han.

Hao wasn’t overly pleased with his team’s performance or the condition of the pitch.

“The match was very hard because we only played on this turf once before and it was hot. I don’t think we gave our best,” he said.

The penalty decision went against China. However, Hao took the high road and did not place blame on the referee. His team caught a bad break and on this day it just wasn’t in the stars for China.

The second half kicked with much of the same strategy and tactics from China. If the plan was organized blocking and frustration, coach Hao Wei had a perfect formula against 8th-ranked Canada. Sinclair, Melissa Tancredi and Jonelle Filigno had trouble connecting with the midfield and fullbacks from Canada going forward.

Allysha Chapman and Josee Belanger both looked lively running up and down the flanks, but they weren’t able to connect with a cross or corner in the China box. Whenever Canada got forward and looked to make a play near the Chinese goal. There was always two or three players in white ready to swarm the opposition. Canada was not quick enough in making adjustments.

Herdman’s first substitution came in the 60th minute when Filigno was replaced by midfielder Kaylyn Kyle. Canada quickly made another substitution in the 70th minute with the injection of 17-year-old Jessie Fleming for Desiree Scott.

Sensing that a goal could dramatically change the match, Schmidt and Sinclair worked a lovely give-and-go. Sinclair found herself open and sent a well timed shot on target. Her effort did not appear to trouble Wang Fei. The crowd — a record for a Canadian national team match — was hoping and wishing for a Canadian marker, and they got their wish deep into stoppage time.

Leon was tripped up in the China box and referee Kateryna Monzul made no hesitation in pointing to the spot. With the roar of the crowd behind her, captain Sinclair stepped up and delivered a calm and cool penalty to lift Canada.

“It was by far the best atmosphere I’ve ever played in here in Canada,” Sinclair said. “They were loud. I really thought the last 10-15 minutes of the game they gave us that extra boost. It was incredible to get a result for them.”

The hosts almost got a shock to the system from the upstart Chinese team. If not for a lucky break, this could have easily been a disappointing draw for Canada. But Sinclair and Canada got a much needed assist from the Canadian faithful and she talked about how it helped immensely.

“I know that we were getting in their end more and we were going a little bit more direct. We were trying to put more heat on them, and I had a feeling. When she pointed to that PK spot I felt like I could breath for the first time in the whole game.”