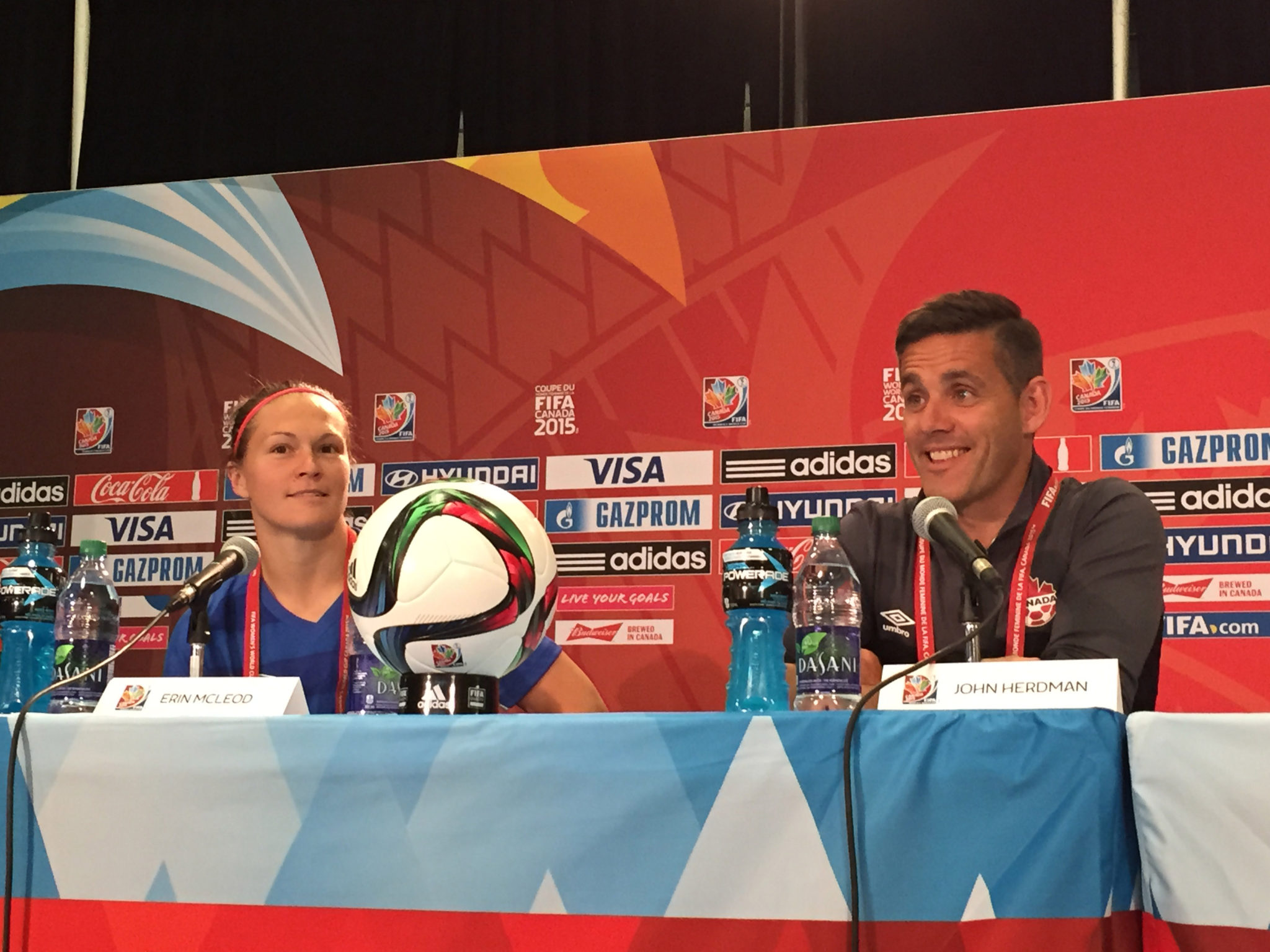 Canada will be center stage in the opening match against China on Saturday at Commonwealth Stadium. Canada coach John Herdman senses that his team is ready after years of hard work and resilience.

“In terms of preparedness, we’ve been working for three years to get to this point,” Herdman said. “There’s a good feel around the team. The girls are light, bright and clear. They’re happy, connected. They’ve been working hard on connection off the pitch and on the pitch and that’s all we can ask for.”

Herdman has always maintained that the July 5 World Cup final will feature a Canada vs. USA matchup. He doesn’t seem to think otherwise as his confidence and belief in his team has never wavered. He will admit that Canada are not the favorites to take the tournament, but they can beat anyone on any given day.

“It’s not bravado here. There’s a genuine belief in this team, there’s a confidence there,” he said. “Are we the favorites for the event? No. Can we get on a roll in this tournament with our country behind us? Yes. This group of women believe they can go all the way. They’ve got a greater purpose than any other team at this event. A much greater purpose, and when you’ve got one of them, it gives you a chance of going places you never thought you could get to.”

China is expected to play a strong defensive block against Canada, the same strategy that China coach Hao Wei used during the Four Nations Tournament in January. Canada was able to beat the Chinese block and come away with a 2-1 victory. Canada midfielder Desiree Scott is expected to play as a defensive midfield and she believes Canada can is well prepared for what they’ll face.

“I think it’s just about being comfortable living on the ball,” she said. ‘Little movements, and making sure we move that block as best as we can. We’ve been working on that and hopefully it comes alive (Saturday).”

With an expected crowd of 52,000 spectators, Canada will feel the full force of the country supporting them. In recent matches, Canada has struggled early in the first half. An all-important early goal could very well change the complexion of the match.

“I think it’s about starting the game off strong,” Scott said. “Sometimes it takes us 15-20 minutes to get settled in a game, and against China we can’t allow that to happen. It’s about starting strong, going out there playing confident and comfortable. Giving it our all and using the crowd as an energy giver and just going for it.”

The starting lineup for Canada still remains clouded in mystery with Herdman keeping his cards close to his chest. Rhian Wilkinson and Josee Belanger are the prime candidates to start at right back. Wilkinson is nursing a nagging hamstring injury, while Belanger is a converted striker.

Hao Wei was not concerned with who will or won’t be on the field for Canada. Hao can only prepare his team to best perform against Canada. The lineup that Herdman will go with is something Hao doesn’t seemed bothered about.

“I don’t care about which of their players will be on the field,” Hao said.

New Zealand and the Netherlands will kickoff of as the second match in Group A. Both sides will be keen to record a victory with a looming match against the hosts in later competition. New Zealand coach Tony Readings is hoping his team is ready for the task at hand. Looking ahead to potential matches against Canada and China could distract the Ferns. A knockout stage berth for the Football Ferns would be wonderful, but Readings and his team aren’t about to jump the gun right now.

“We haven’t really spoken about results at all for us,” Readings said. “We place a real large emphasis and focus on just making sure we focus on our performance. If we start thinking about the outcomes now you’re already thinking ahead of yourself. You need to take care of the job at hand. It’s a bit cliché, but we’ll be looking at each game to put in a performance that’s better than our opposition. We’ll worry about the group stages and things like that as we go. We’re not searching for third place, will be searching for top of the group as well. Every single game is going to be a focus for us. Hopefully we’re going to grow through the tournament and through the latter stages.”

The Netherlands have been scoring goals for fun. The attack-minded and possession style of football that ‘The Oranje’ will play could surprise some of their opponents. Readings believes Group A will be a closely contested group. There is not much separation between Canada, China, New Zealand, and the Netherlands according to the latest FIFA rankings.

“We know that every single game in our group is going to be tight,” Readings said. “The difference between the highest ranked team, which is Canada, and us is pretty tight. Every game is going to be close and this one will be no different. Holland are 12th in the world for a reason and that’s because they’re a very good team. Of all the teams that I’ve seen play in recent times, they’re probably the one that really embraces a possession style of football more than most teams. They’ve got the players to do it.”

Netherlands have been labelled as a strong dark horse in this tournament. The scoring punch that they will look to is something many teams will struggle to counter. Striker Vivianne Miedema, the 18-year-old who led all of Europe in goals in qualifying, has recovered from an ankle injury. Coach Roger Reinjers would prefer to take on the role as a sleeper team.

“We are a newcomer and that’s what I said before,” he said. “I think it’s good for us and our team to be here at this big tournament and play games in such a tournament like this against world-class teams. If that makes us better, we will see. Of course we want to win our games and we will see how far it and where it ends.”

Herdman was asked what this tournament might do to help restore and help the current image of FIFA. Clearly he has bigger things on his mind right now and propping up the image of FIFA doesn’t appear to be on his to-do list.

“Look I think the main thing in our environment is we’ve certainly put our head in the sand,” he said. “If Sepp Blatter had been abducted by aliens I wouldn’t have known and really wouldn’t have put any attention to it either. You control your attention, and the only thing we’re putting our attention on at this point is being the best we can be to represent our country. I’m not interested in FIFA’s image. I’m not interested in what this does to the global image of the game. What I’m interested in, is this team winning the World Cup, which will change our country.”