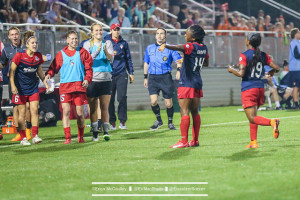 It’s not just for the Americans that the 1999 Women’s World Cup has loomed large. While that tournament was obviously the last time that the United States hoisted the trophy, it also was the first and only time Nigeria has advanced out of group stage of the event.

Heading into the draw for 2015, there was plenty of reason to think that Super Falcons might once again advance past the group stage. After all, their U-20 team made it to the U-20 Women’s World Cup Final last summer and their star striker Asisat Oshoala was named Best Player of the tournament.

But much like the U-20 Women’s World Cup Final in which the Nigerians dominated but lost, fate dealt the Super Falcons a tough hand when the teams that qualified were drawn into groups. Nigeria was placed in the tournament’s proverbial “Group of Death”, Group D, along with 3 top ten teams, United States, Sweden, and Australia.

The Super Falcons are no pushovers either. Last week, Nigeria shocked many when they battled World Cup host Canada to a 0-0 draw behind closed doors in Toronto. While some observers have Nigeria finishing at the bottom of the group, others see the African side as the potential surprise team of the tournament.

Despite the draw, given their recent success in youth tournaments and the infusion of young talent from these tournaments into the squad, there’s reason to optimistic about the team’s chances of advancing.

Super Falcon forward Francisca Ordega, who plies her trade in NWSL with the Washington Spirit, recently laughed when asked about being drawn into tournament’s toughest group.

Coincidentally, just a few days later, Washington’s head coach Mark Parsons admitted luck played a role in his team’s a 1-0 victory over Sky Blue FC, despite the latter dominating throughout. Parsons was quick to point out that sometimes you make your own luck. By keeping Sky Blue’s offense at bay, the Spirit defenders allowed the team to be in position to win in the waning moments.

With a chance to win the game in stoppage, who was there to take advantage of a bit of luck? Francisca Ordega. She received a pass from Crystal Dunn and then beat the keeper to grab three points from the better side on the night. It was a fitting World Cup send-off for the striker, who in 5 games with the Spirit has shown that Oshoala will be far from the only dagger in Nigeria’s attack in Canada.

An unknown on this side of the Atlantic prior to her arrival in Washington, Ordega has been a revelation for the club. She has played a significant role in the Spirit’s positive start this season, notching a pair of goals and assists. The 21 year old has often proved too much for opposing backlines with her blistering pace and quick movement. Her success hasn’t gone unnoticed by her club coach.

“On the technical side, she’s kind of got it all,” Parsons remarked, “She can pass. She can shoot. She can bring the ball up. She can dribble. I think she’s made some very experienced centerbacks in this league look silly at times and she’s 21.”

Most notably, in a game against Sky Blue back in April, Francisca Ordega made a move that left veteran U.S. defender Christie Rampone dumbfounded. That’s something that’s happened rarely for Rampone, who’s racked up over 300 caps.

Although she’s young, Canada 2015 will be Ordega’s second Women’s World Cup. A then 17 year old Ordega registered 23 minutes in the 2011 World Cup. She’s hoping to play a bigger role this summer.

“I should say I was just a kid. (I was) just an upcoming player, so they were trying to make it up to me for me to get playing time and experience, where this time around hopefully, I’m going to make it proud for my country and I think I’m strong today to play for my country,” she said, describing the difference between this year’s World Cup and the 2011 edition.

Regardless of what happens in the next couple of weeks for her, the future looks bright for the forward. Parsons already thinks of his young charge a world class player while admitting it will be a few years before she reaches her full potential.

Parsons’ comments echoed that of his star forward Crystal Dunn. Together Dunn and Ordega have been the most menacing striker duo in the NWSL.

“She’s young and she has so much more growth in her,” Dunn said in April, “ That’s what scary because I think she’s such a dangerous player… She’s definitely going to be something to watch in later years.”

Ordega said after her game winning goal that she’s very excited and very happy to represent the Super Falcons in this year’s Women’s World Cup adding, “It’s everyone’s dream. World Cup is one of the biggest competitions in the whole world and everyone wants to be there. So it is a privilege for me to be here. I am so happy.”

If what she’s displayed in the NWSL is a sign of things to come, Nigerian soccer fans should be very excited about that prospect of Ordega suiting up in green and white for years to come as well.