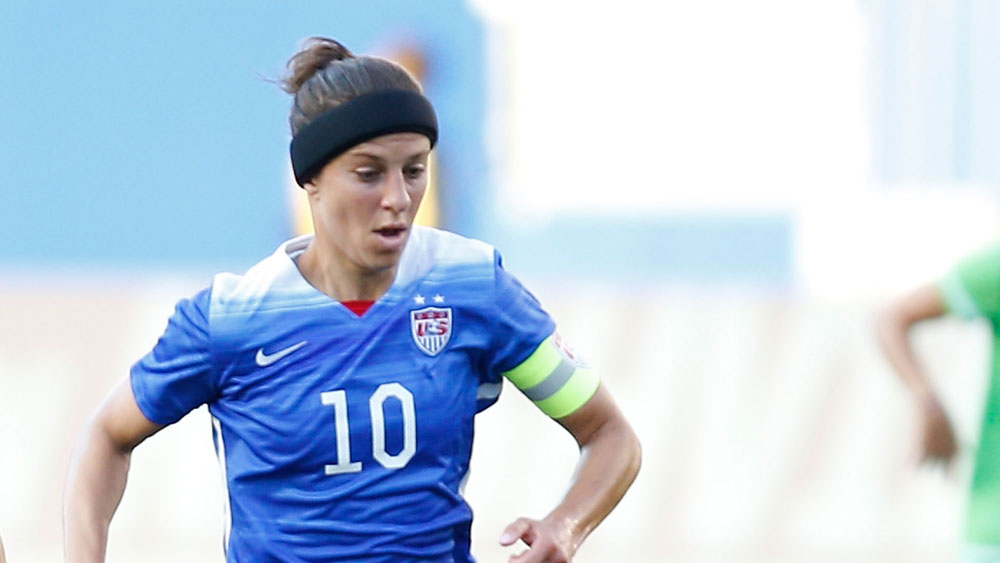 Jill Ellis’ midfield has been the most scrutinized section of the field over the past eight months. Whether there are two or three players in the middle of the part, a narrow or a wide system or a direct style of play, this is the area that the match will be won and lost.

Can the U.S. women win the midfield? The question will loom large over each match, especially against the better, more technical teams that will be able to keep the ball away from the Americans.

Shannon Boxx is headed to the World Cup at 37 years old, but age was the least of her fights to get to this point. Boxx’s battles with Lupus and Sjogren’s disease have been ongoing and she missed a large chunk of 2014 to give birth to her daughter. Once among the world’s best midfielders, Boxx is the only defensive midfielder on the United States’ roster. It isn’t a position that U.S. coach Jill Ellis specifically utilizes, but it is one that could be necessary to kill off matches which the United States leads late. The combination of that with Boxx’s fitness levels set the stage for her to be a late-game sub if the U.S. is leading.

The team’s youngest player, Morgan Brian, shot into the spotlight over the past two years, winning back-to-back MAC Hermann Trophies as college soccer’s best player becoming the easy-choice No. 1 pick by the Houston Dash in the 2015 NWSL Draft. Brian has adapted relatively seamlessly to the international and professional levels. Brian is an attacking midfielder who has often been shoehorned into a wide role or deeper role at times. She provides depth in central midfield, which has been locked down by Lauren Holiday and Carli Lloyd.

Tobin Heath is a rare breed of American midfielder: crafty, technical and confident enough to beat players one-v-one. She is the most likely of all the U.S. players to have her nutmeg or other skill move go viral, as one did recently when she torched a Mexico defender. Heath battled a hamstring injury earlier in May but has since played. Her ability to play on the flanks could come in handy for a U.S. team whose biggest weakness in the early spring was too narrow of a shape and a lack of creativity (cue Heath) to break down opposing defenses that sat in.

Of all the X-factors on this United States team, Lauren Holiday’s play could be the most important to watch. With FC Kansas City, Holiday was the best player in the NWSL in 2013 and looked it for large stretches of 2014, when she helped her team win the league title with two brilliant assists in the final. But Holiday plays in a deeper and slightly less comfortable role with the United States, where she burdens more defensive duties and frequently drops as low as level with the center backs to collect the ball and distribute. Holiday, who solidified her place on the world stage in 2011 as Lauren Cheney, is married to Jrue Holiday, a guard for the NBA’s New Orleans Pelicans.

Carli Lloyd’s quest is a microcosm of her team’s: translate Olympic success into World Cup glory. The Americans are three-time defending Olympic champions and Lloyd scored the gold-medal winning goal in 2008 and 2012, the only player to achieve that back-to-back feat. At 32 years old, she is very much in her prime and eager to fully stake her claim as the world’s best midfielder. She is certainly already in the conversation as the United States’ best all-time scoring midfielder (63 goals), but a World Cup title could cement that.

HAO, as Heather O’Reilly is known, is one of the most experienced players on the United States national team. She is known for her fierce hustle and blazing speed, the latter of which is a half-step slower at 30 years old but the former of which is as relentless as ever. O’Reilly is a reserve these days after spending much of the last decade as a regular starter, but she provides the United States with that much-needed width that it at times so desperately needs.

Arguably the team’s most creative player, Megan Rapinoe is one of the team’s most recognizable players both on the field and off. She has been part of the United States’ greatest recent moments – crossing the ball to Abby Wambach in that historic 2011 quarterfinal comeback against Brazil and scoring an Olimpico in the 4-3 extra-time win over Canada in the 2012 Olympic semifinal, arguably the best game ever played – and she still probably doesn’t get enough credit for what she does. The U.S. misses a beat when Rapinoe isn’t on the field. The creativity can dry up and the crosses are less frequent. She’s dynamic, entertaining and one of the team’s most personable players.