Morgan participates in US’ first practice in Canada 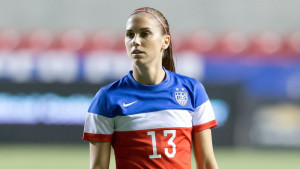 Morgan has not played a competitive match for club or country since April 11 due to a left knee contusion. U.S. coach Jill Ellis said on Saturday that Morgan’s minutes would be limited to start the World Cup due to the amount of time the U.S. striker has missed. The U.S. opens the World Cup on Monday against Australia in Winnipeg, Manitoba.

“In terms of Alex, we’re building her,” Ellis said on Saturday. “Realistically, she’s been out for a while, so in terms of minutes, I think that is something we’re going to have to build through the early games.”

Morgan has 51 goals in 84 appearances to date for the United States.

Ellis told the Peterson on Wednesday that she is “very pleased with the progress” of Morgan. The 25-year-old striker participated in the start of practice last Friday and did some of the warmups with the team before Saturday’s match.

Canada’s Matheson resolute: ‘I plan on being back’
Meet the US World Cup team: Goalkeepers