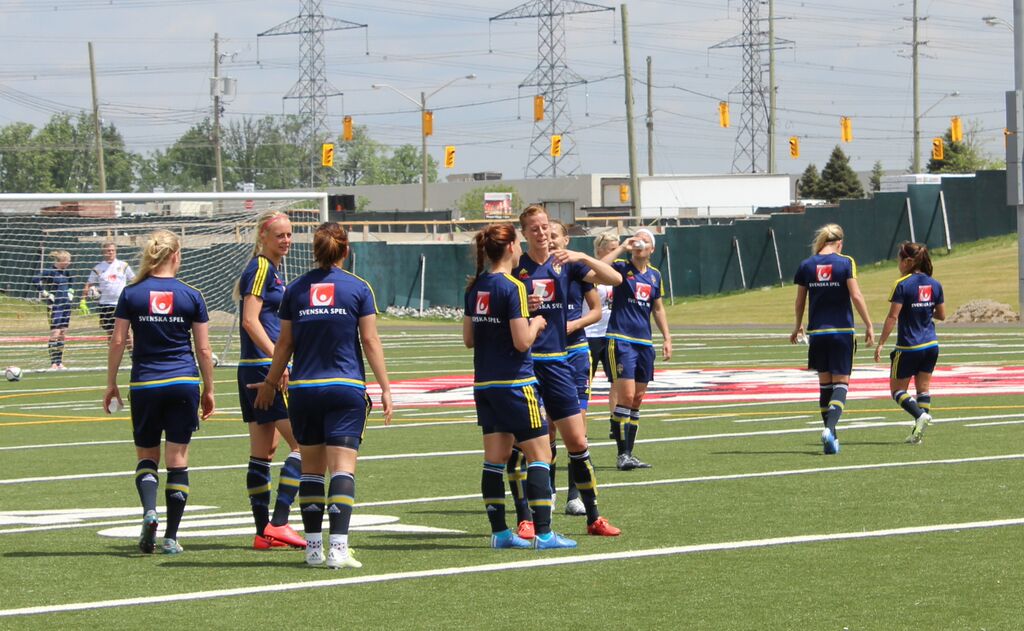 TORONTO — Pia Sundhage and the Swedish national team have been training at York University as they prepare for the World Cup. They face difficult competition in Group D as they’ll battle Nigeria and the United States in Winnipeg before travelling to Edmonton to close out group play against Australia.

No.5-ranked Sweden will look to improve on a Germany 2011 World Cup journey that saw them bounced from the semifinals after a 3-1 loss to eventual World Cup champion, Japan. Sweden and the U.S. played against each other in a final Group C match, which saw the Scandinavians prevail 2-1 and take first in the group.

Midfielder Caroline Seger is not deterred by what Sweden will be up against starting on Monday.

“It’s probably the toughest group in the World Cup,” Seger admitted. “I also know that from before, that normally when Sweden is in a tough group we like it. I hope it’s the same for us this time because I think that the tougher games we play, the better Sweden can be.”

Kosovare Asllani scored the winning goal in Sweden’s 2-1 preparation match over the Netherlands on Saturday. Asllani delivered a fantastic thunderous volley past the Dutch keeper just as thunderstorms interrupted the continuation of the match. Playing in a tough group will be a challenge for Sweden and Asllani knows Sweden won’t be able to take any games lightly.

“Yeah, ‘Group of Death’. I think it’s going to be really hard, all the games,” she said. “Not just only one game, I think all the games in our group are going to be hard. We really need to play our best football to make it through.”

Sundhage has now had plenty of time to come in and put her signature on how Sweden plays. Tactics, formations, and the philosophy for the yellow and blue clad Swedes has changed since they bowed out of the 2013 European Championships to eventual winner Germany.

Asllani recognizes that her side tried to put on a show during Euro 2013. The up and down, back and forth, quick tempo Sweden played was eye pleasing, but they did not lift the trophy.

“The way we play, we tried to change a little bit by keeping the ball with a little bit more possession,” she said. “During the European Championship we played a real fast football. We only put the ball forward and just went for it. Now we’ve changed it a little bit and our philosophy is more to keep the ball.”

The focus for Sweden at this World Cup will be playing solid defense. Nilla Fischer will anchor the Sweden backline paired with center back Emma Berglund. Elin Rubensson and Lina Nilsson are expected to shore up the fullback spots. If Sweden elects to play a 4-1-3-2 formation, you could see Seger playing back to protect the backline. Defense is important for Sweden, and Seger hopes it will be very solid.

“First of all I think it’s very important that we play good defense,” she said. “We had some difficulties in the last games we played and I’m not use to that. Coming from Sweden I’m very use to having a solid defense. I hope that we can have that and be very very good in defense. I think that’s the main key for making it in this group.”

Injuries have started to cause concern for Sweden. Charlotte Rohlin was given a scheduled rest day last week. Several players have been sporting a leg bandages, wrapped toes, and ankles. Emma Berglund had to leave the match against the Netherlands early. Jessica Samuelsson is nursing a thigh injury. To help with potential injury woes, Sweden have called up defender Marina Engström Pettersson. Caroline Seger maintains her knee is fine and gives her thoughts on pre-World Cup injuries for Sweden.

“It’s fine, my physio told me it’s my age, but I don’t want to believe that,” Seger said. “I think it’s more the turf and my switching from grass to turf.”

Each and every World Cup team will be doing their best to prepare for competition on artificial turf. Some players are more familiar with turf than other players. The earlier a team arrives in Canada to get ready for the World Cup, the more they can adjust to a surface that has proven to be quite unpopular. Asllani is doing her best to try to avoid turf blisters.

“The weather is okay, it’s decent,” she said. “It’s hot on the turf for our feet. Burning hot. I’m not used to playing on turf so it’s a little bit different, but with the weather and the sun on the turf it’s worse for the feet because you get blisters.”

Seger, a fellow PSG teammate, has noticed a big difference in trying to get a team of players that are most comfortable playing on grass to feel comfortable on turf. Each training session and workout on turf can only increase a player’s tolerance and comfort level, and that takes time according to Seger.

“It’s harder and coming from a season full of grass it’s a big difference for me,” she said. “It’s been a year since I’ve played on turf. It takes time for the body to adapt, but I think after being here for two weeks before the World Cup it’s very important. I think all of us get the best preparation we can get and move forward from there. I already feel it’s getting better so I hope that it continues.”

When the World Cup does kickoff on Saturday in Edmonton, Alberta, it is hoped that the FIFA arrests, and ensuing scandal will not cast the spotlight away from the Women’s World Cup. For many players this is a lifetime of hard work, sacrifice, and achievements that have helped get them to the World Cup. Seger was gracious enough to tackle her thoughts on the recent FIFA circus.

“I hope that something good comes out of this, because I think my personal feeling is that something needs to change,” she said. “It can’t be like this. I hope that the outcome is going to be good for women’s soccer, but I don’t know if it’s going to take away the focus from on the Women’s World Cup. I think and I hope not.”

The answers will soon come when the tournament kicks off on Saturday,