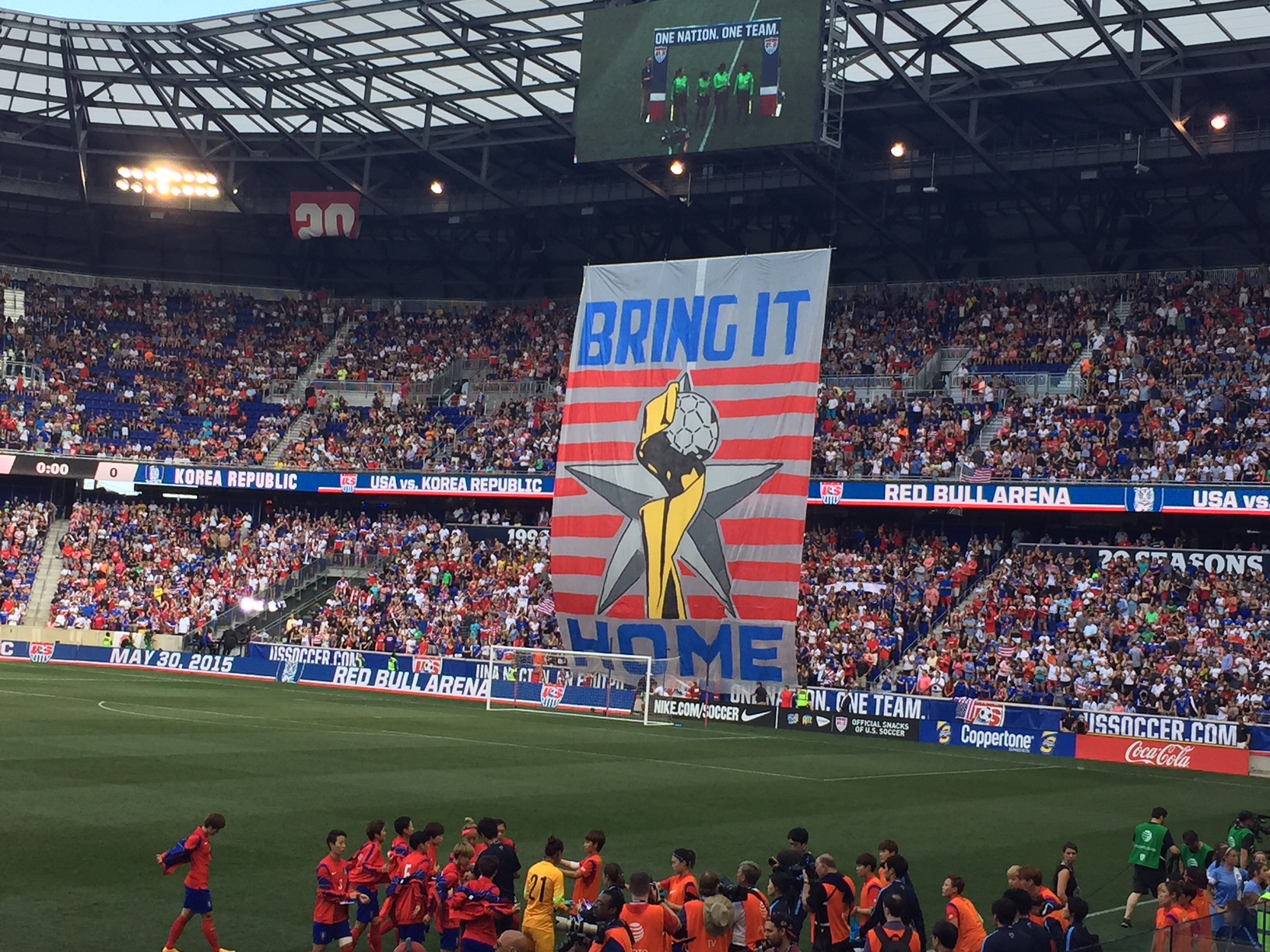 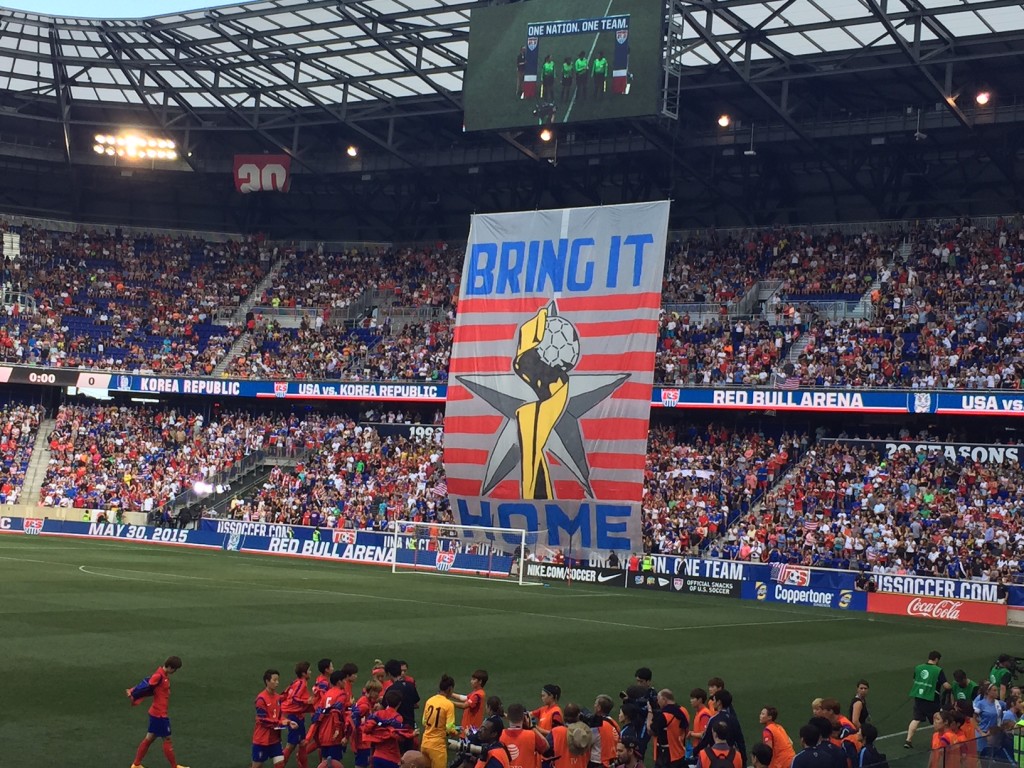 HARRISON, N.J. – There were two very clear messages put forth on Saturday, one before the United States women’s national team’s lackluster, 0-0 draw against Korea Republic at Red Bull Arena, and one after the match.

United States supporters raised a banner from rooftop to field level behind the south goal of the stadium prior to the match that read, “BRING IT HOME,” with a drawing of the Women’s World Cup trophy emblazoned over the red stripes of an American flag. The United States’ goals in Canada in June – and they hope July – are as black and white as their new home jerseys: Win or fail. The Americans haven’t won the World Cup in 16 years.

But the match that ensued hardly looked like a world-beating United States team up against an inferior opponent. Korea Republic found space around the United States’ midfield and the Americans created only a few good chances on net.

“To be honest, it was a boring game,” U.S. forward Abby Wambach succinctly summarized. That was message No. 2.

Direct play dominated the Americans’ tactics throughout the match, leaving their midfield both passed over by their own teammates and Korea Republic. This was a match a match the United States was expected to dominate. Two years ago the U.S. ran circles around Korea Republic, beating them 5-0 in the same stadium on a night that Wambach scored four times to break Mia Hamm’s all-time scoring mark. To fail to score against Korea Republic – and to lose the midfield battle in stretches – is concerning for a U.S. team facing the Group of Death against Australia, Sweden and Nigeria.

U.S. coach Jill Ellis said she is happy that nobody was injured in the match and she looks forward to getting to Canada and away from the media “circus” the United States women have been juggling. She cited possibly tired legs and a mentally draining week, which were more explanations than they were excuses. Ellis and players

But the 48-year-old coach also conceded that Korea Republic’s midfield did well, specifically in the first half.

“The space behind our midfield was too big,” Ellis said. “It was more about having [our midfielders] not be so square. We needed to balance each other out, to kill that space. They had that centrally and they were finding the pockets behind.”

Saturday’s match against Korea Republic was really never about the opponent or the game, however. Ellis said as much in Friday’s pre-match press conference. Saturday’s match, just like the other two in the send-off series against inferior opponents Ireland (3-0) and Mexico (5-1) was always about the U.S. and its final preparations. The Americans are already in World Cup mode, midfielder Carli Lloyd said earlier this week.

U.S. defender Becky Sauerbrunn noted that the team barely beat Mexico in the 2011 sendoff match and lost to Norway in a closed-door match. The savvy central defender isn’t panicking over a scoreless draw.

“This has happened before, so we’re not too stressed about it,” Sauerbrunn said. “We’ve played a bunch of great games this year already. We did some great things out here; as a defender I’m just proud that we got a clean sheet.”

The tune blaring through Red Bull Arena as the team entered the pitch was serendipitous. Decked out in their new black, white and bright green warm-up gear, the moment was still fittingly American, even if the jersey colors was not.

Pop star Katy Perry’s “Firework” song rang through the rafters of the sold-out 25,000-plus seat stadium, and as the United States 23-player roster began its semi-synchronized stretching, Perry’s “Just own the night like the 4th of July” verse ushered in the afternoon.

Independence Day is of particular importance to this U.S. women this year, who will go into the day either be heartbroken or on the verge of their country’s first World Cup title in 16 years. The World Cup final is July 5.

That is the game that matters. Not a scoreless draw against Korea Republic or a 2-0 loss to a France or an ugly but efficient win over England in February. What matters is getting to the final and winning it this time, unlike four years ago. The catch is that the U.S. needs to be enough in form to get through the six matches that would come before that holy day in Vancouver.

“There’s a sense that when nerves rise, when you get on the biggest stage and nerves rise, people play a little bit different,” Wambach said. “They don’t take as many risks because they don’t want to be the one that messes up. So I think if we all can own the night, own the games that we play in and own the responsibilities with roles that we are given by our coaches – not worrying about making mistakes, not worrying about failing – if we can fly at other teams; that’s a team, with the players that we have, that’s unbeatable.

“Now if we play a little bit conservative, if we play to not fail, then that’s a team that I don’t know if [it] gets out of our group.”

It’s black and white. Just like the ultimate objective in Canada.