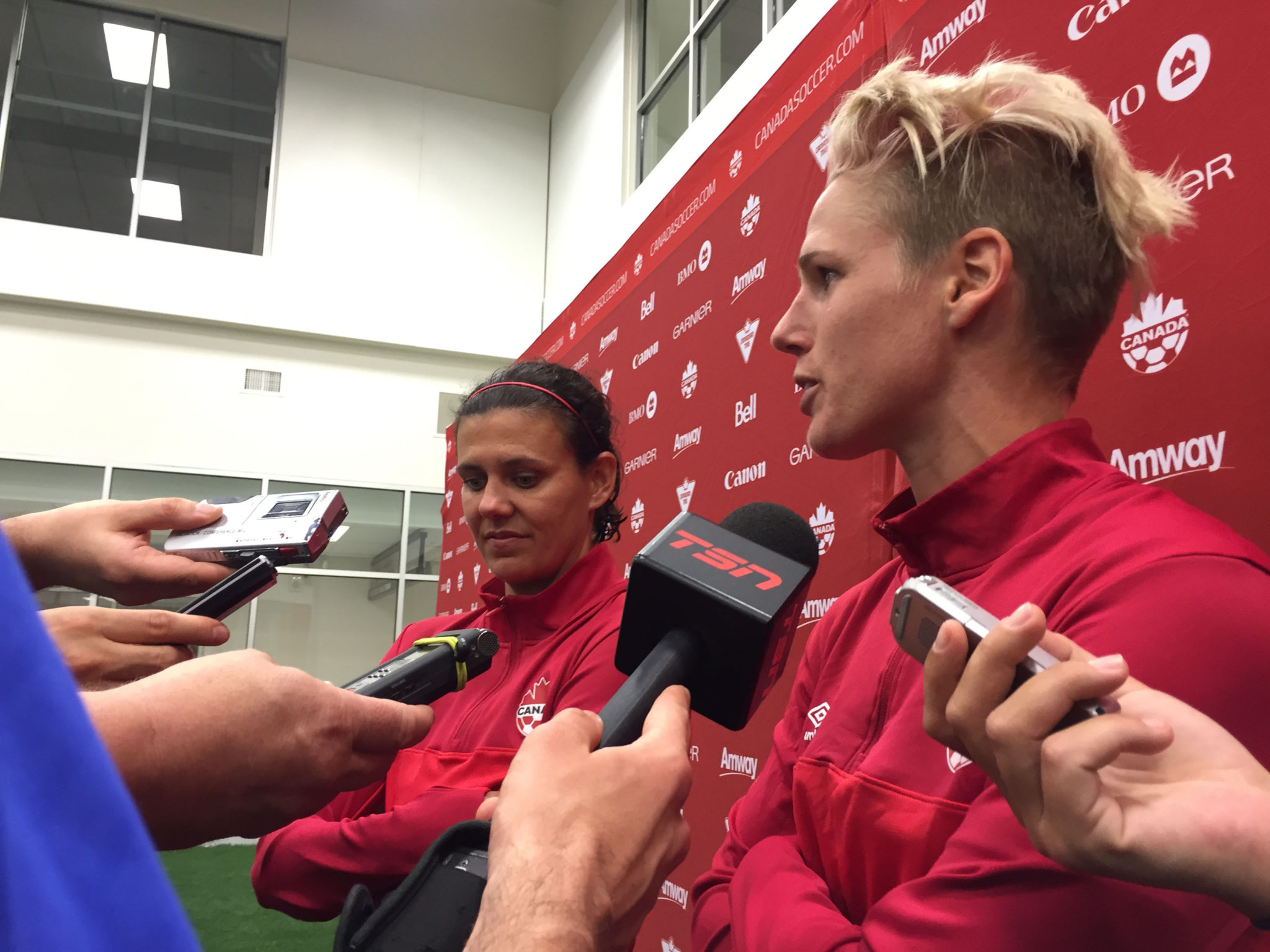 Sophie Schmidt (right) scored to lift Canada past England in a friendly.
(Photo Copyright Harjeet Johal for The Equalizer)

Hamilton, Ontario — Sophie Schmidt scored a cracking goal in the first half as Canada defeated England, 1-0 on Friday in each team’s final tune-up match before the World Cup in front of 23,197 fans at Tim Hortons Field.

John Herdman and Mark Sampson both tinkered with their starting 11 as they looked to confirm tactics, formations, and starting spots for crucial Group A and Group F matches, respectively.

Injuries to Rhian Wilkinson (hamstring) and Marie-Eve Nault (Calf) meant that striker Josee Belanger was asked to fill in at right back for Canada. The home team started in a 4-3-3 formation with Christine Sinclair, Melissa Tancredi, and Adriana Leon looking to push through the England backline. Tancredi wore the captain’s armband on her 100th cap appearance for the Red and White. The nearby Ancaster, Ontario, native had friends and family in attendance supporting here in what was a rare home match for the 33-year-old.

The first real opportunity to score for either side came in the 18th minute when England skipper Steph Houghton sent her free kick from just outside the Canada box over the bar. England followed up with a pair of corners that keeper Erin McLeod was able to handle and street the home side away from danger.

Where England failed to convert moments early, Canada did not. Schmidt sent a blast past Karen Bardsley in the 23rd minute. The Manchester City keeper had no chance to stop the strike as Schmidt labelled the ball past her to put Canada ahead. Belanger delivered a perfect pass and fantastic delivery as Schmidt lifted the crowd to their feet.

“To be honest it was a big blur,” Schmidt said. “I don’t remember much. I remember seeing the ball and I was hoping Josee would play it behind the girl. I just thought, I’ve got to get to it before she does. It was just a first time shot, that’s all I’ve got.”

It was the Sophie Schmidt show in the first half as Canada’s 2014 leading scorer nearly netted another tally for Canada in the 32nd minute. Schmidt was fouled near the right corner of the England box. With Sinclair and Schmidt standing over the bar. Schmidt curled an attempt that landed on the mesh of the England net.

Heading into the interval Canada lead 1-0 thanks to that glorious thunder-smash from Sophie Schmidt. England failed to do much going forward as the Lionesses seemed to struggle with Mark Sampson’s 4-4-2 formation.

Neither side made any changes heading into the second half. Canada came out of the break with mooting pressure. Allysha Chapman made a dangerous run down the left-flank and sent in a clever ball that was booted out of play for a Canada corner. On the ensuing corner, Schmidt was at her best as she tried to sneak the ball nearside past Karen Bardsley in the 51st minute.

Sampson decided to shake up his lineup with a trio of substitutions in the 61st minute. Eniola Aluko, Fara Williams, and Alex Greenwood all checked into the match. England were desperate to get going on offense with Canada’s midfield duo of Desiree Scott and Ashley Lawrence doing a terrific job of shutting down the Lionesses in transition.

“We’re reasonably pleased with our performance,” Sampson said. “We arrived in the country late on Monday and had one real training session under our belt. We had to play in a way we could manage the game and I felt we did that. We restricted Canada to limited opportunities. We knew we wouldn’t create much ourselves because we’re lacking a bit of sharpness at the moment. We’ve got a good 10 day block of work and on the back of that performance today we’ll be in a much better place at the star of the tournament when we play France.”

Seventeen-year-old Jessie Fleming earned her 16th cap for Canada as a second half addition. The teenage midfielder will be heavily depended upon during the World Cup as Diana Matheson’s health remains in uncertainty.

Canada was the better side against 6th-ranked England. They looked more organized, and sharp defensively all over the pitch. But scoring remains a question mark for the host country. A late shot off the crossba from Fara Williams from distance earned a momentary gasp from the crowd. For the most part, Sampson and England did not do enough to challenge Canada.

It’s possible the two teams will meet again in the quarterfinals, which could happen if Canada wins Group A and England finishes second in Group F.