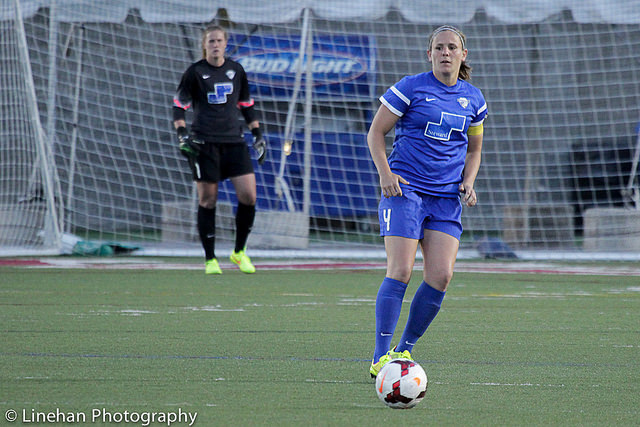 “It is with a sad and humble heart that I have decided to announce my retirement as a professional soccer player. I have been thinking long and hard about this and have come to the conclusion that now is the time for me to step aside from playing the game that I love,” Whitehill said in a statement. “With my recent injury, and the fact that I will be missing games while commentating this summer during the World Cup, the best thing for me, my family and the Boston Breakers is to step aside.”

Whitehill, 33, helped the United States national team win the 2004 Olympic gold medal, the first of to date three straight. She appeared for the U.S. 134 times, scoring 11 goals. Whitehill was part of the United States’ third-place teams at the 2003 and 2007 World Cups.

Boston has been home for Whitehill for the past three years. She has served in a dual role as a player-assistant coach for the Breakers since the end of 2013. She previously played for the Washington Freedom and Atlanta Beat in WPS.

“I am going to miss this game so much. Playing professional soccer has been a dream come true for me, and I am so grateful that I was able to play for as long as I did. It didn’t matter the league, WPS, WPSL Elite or the NWSL, it just mattered that I had the opportunity to play the game that I love for a living,” Whitehill said. “Attempting to fully express my gratitude for the organizations, fans, and coaches that helped me develop me as a player and a person is an impossible task since so many people have had such a profound impact on my life.”

At the time going by her maiden name of Cat Reddick, Whitehill remains the only defender to ever win the MAC Hermann Trophy as college soccer’s best player, claiming the award in 2003. She was a four-time NSCAA All-American who guided the University of North Carolina to two national championships.