The Lowdown: XI NWSL players to watch in Canada 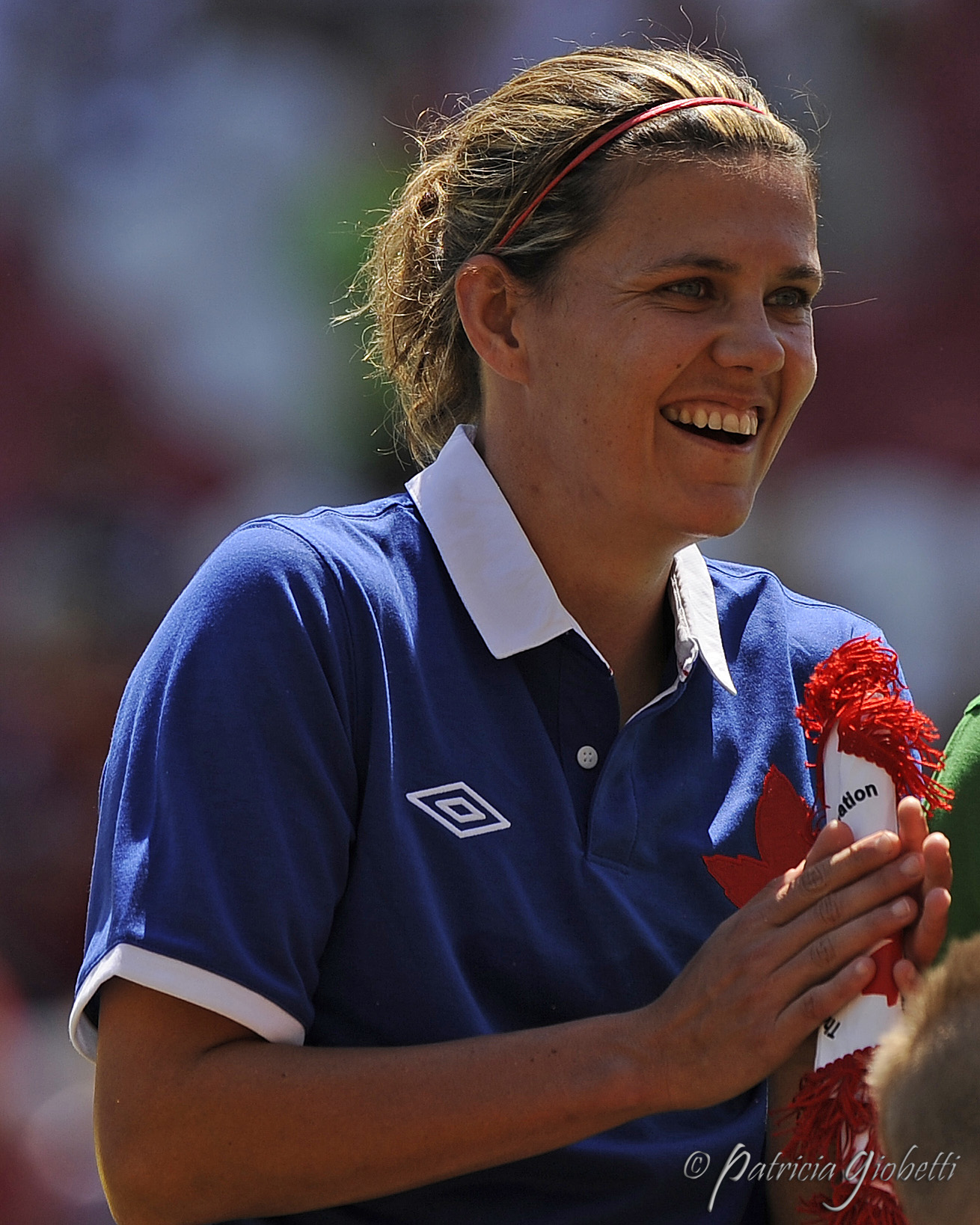 Tuesday marked 11 days until the World Cup. So here are 11 NWSL players, not Americans, who figure to have an impact on both the World Cup and the second half of the league season.

Nadine Angerer, GK, Germany: Angerer recently announced her retirement effective the end of the NWSL season so this will be her final World Cup. The Thorns’s keeper was the backup to Silke Rottenberg in 2003 and the starter in 2007 and 2011. The Germans won in 2003 and again in 2007 when Angerer played the entire tournament without conceding a goal.

Caitlin Foord, D/F, Australia: Still 20, Foord is already a veteran of one World Cup and two NWSL seasons with Sky Blue. That makes her familiar with most of the American players she will be up against in Australia’s opener. Foord has yet to play in the league in 2015 and will be a welcome addition to Sky Blue once she is available. Listed as a forward by Australia, Foord’s best NWSL work has been at right back.

Abby Erceg, D/M, New Zealand: The captain of the Kiwis joined the 100 cap club before turning 25 and will be trying to help New Zealand navigate through a tough but manageable Group A. She has been a stabilizing presence since joining the Red Stars who are undefeated through six games in the league. Erceg and Julie Johnston should contend for best center back combination post-World Cup.

Stephanie Catley, D, Australia: Another of Australia’s budding stars, Catley joined the Thorns last season and quickly became the best attacking outside back in NWSL. Her ability to get forward could go a long way in determining how Australia fares against the United States and Sweden in their group. And when she returns to Portland her presence might be enough to demand a return to a standard four-woman back line.

Diana Matheson, M, Canada: One of the most talked about players in Canada ahead of the tournament, Matheson is recovering from ACL surgery and an unrelated broken foot. As she scrambles to be ready for the biggest tournament of her life, “D-Math” has already been ruled out of the opener. The Canadians would like nothing more than to stay alive long enough for her to contribute. The same goes for the Washington Spirit.

Adriana Leon, M, Canada: It remains to be seen how much playing time Leon will get, but she can make a difference particularly on the flanks. The same applies for when she gets back to Chicago.

Samantha Kerr, F, Australia: Kerr was traded to Sky Blue from the Flash over the winter so when she returns to NWSL it will be with a new side. At 21 she is not among the five youngest members of Australia’s team, one that will be leaning heavily on a rising crop of stars of which Kerr is one. Her wing play is good enough to completely reform Sky Blue’s stagnant attack.

Francisca Ordega, F, Nigeria: Virtually unknown on these shores before joining the Spirit, Ordega—who played 23 minutes as a teenager at the last World Cup—now figures to be one of the international players most worth following. Drawn into the same group as the United States and Sweden she will be one of the key cogs if Nigeria are to surprise and make their way into the knockout stage.

Monica Ocampo, F, Mexico: Another who has not appeared in NWSL this season, Ocampo scored Mexico’s first goal at the World Cup four years ago, a golazo that lifted Mexico to a 1-1 draw with England.

Jodie Taylor, F, England: Taylor is somewhat unique to the World Cup. First, that she did not make her senior international debut until last summer when she was 28. Second, because she may be facing less of a logjam for playing time in England as she will when everyone returns to Portland. Her first season in NWSL—in Washington—did wonders for her career.

Christine Sinclair, F, Canada: Sinclair’s legacy as an all-time great in women’s soccer is quite secure, but it can be argued that no player has more to gain over the next six weeks than she does. Her hat trick against the United States in the Olympic semifinal at Old Trafford was one of the most inspiring performances in recent memory. If she can recapture that and carry the hosts on a journey to the back end of the World Cup, Sinclair could carry women’s soccer on her shoulders around Canada for years to come.

Masar and Henninger to the rescue: This has already received quite a bit of attention, all of it well deserved. Masar absolutely had her best match as a defender essentially shutting down Genoveva Anonma and using her boundless energy and work rate to snuff out attacks all over the field. When the Thorns did get behind the Dash defense, Bianca Henninger was there to make several point blank saves. The most impressive saves came in a pair just moments before the Dash scored the only goal of the match. It was their first win in four tries against the Thorns and the most significant win in the club’s history.

Mewis helps get win for Horner: Samantha Mewis continues to be impressive in the Flash midfield and she was a major reason the Flash upended the Spirit, 3-2. The Flash found themselves down both of their goalkeepers after Sabrina D’Angelo hurt her shoulder and Chantel Jones received a one-match suspension. Enter Robyn Horner, an amateur call-up who collected a victory in what well could be her only game action at the professional league level. The goals she gave up were a penalty and a virtually helpless scenario one-v.-one against Crystal Dunn.

Red Stars roll on: The Red Stars won in Kansas City to remain undefeated and open a four-point lead atop the table. That means no matter what happens this weekend the Red Stars will turn their calendars to June as a first-place club. In Kansas City they got goals from their top two draft picks, Sofia Huerta and Danielle Colaprico. For Huerta it was her fifth goal over the last three games. Her previous two performances each earned her Player of the Week honors. In goal, Michele Dalton has performed admirable to a 2-0-1 record since taking over for World Cup bound Karina LeBlanc.

Portland Thorns FC at Washington Spirit (Saturday, 7pm EDT) – The Spirit had the Thorns on the ropes in Portland before surrendering two for a 2-2 draw. The Thorns won two straight to open the season followed by two draws and then two losses.

FC Kansas City at Boston Breakers (Saturday, 7pm EDT) – The Breakers have found their defensive shoes with a single goal against in their last two games after leaking a dozen over the first four. FC Kansas City’s unbeaten streak ended to the Red Stars and highlighted their offensive struggles.

Chicago Red Stars at Seattle Reign FC (Saturday, 10pm EDT) – The Reign were the final unbeaten club in the league in 2014 before losing in Chicago. This season the Red Stars are the last team without a loss. Can the Reign return the favor in a place they have never lost and in their first league match in three weeks?

Houston Dash at Sky Blue FC (Sunday, 3pm EDT) – The Dash exit their huge win in Portland looking to build while Sky Blue are close to crisis with no wins since opening weekend an still without multiple goals in the same game.

Here are the latest attendance figures following Week 7. FC Kansas City’s weather-induced dud on Saturday dropped them below the Spirit, who were away.

-The Reign drew China, 1-1 in a friendly at Memorial Stadium last Friday. Laura Harvey said it is the best her side has looked in 2015.

-The Breakers retired Leslie Osborne’s #12 at halftime on Friday. A banner in her honor now hangs in the club’s Pillars of Excellence. Osborne played for the club from 2010-2012 spanning WPS and WPSL Elite. In 2010 and 2012 they were one step from the championship match. Preceding Osborne into the Pillars of Excellence are Maren Meinert, Angela Hucles, and Kristine Lilly.

-The Jen Buczkowki streak is at 53. That’s how many matches she has played and started in a row since the start of NWSL.

-Brittany Cameron of Sky Blue is the only goalkeeper to play every minute for her team this season.

-Sure looked like Meg Morris’s ball off the crossbar was in for Sky Blue.

-Have to agree with Breakers’ coach Tom Durkin that his new right back Lauren Lazo serves an excellent ball. Her probing ball near the top of the six started the sequence that led to the team’s goal in a 1-1 draw against Sky Blue.

-Cerdit to the number of fans who stuck it out to watch FC Kansas City in the rain and after a multi-hour lightning delay.

-Maya Hayes looks like Sky Blue’s new right back and she looks decent. Hayes improved throughout her rookie season but had been struggling to make a mark offensively early in 2015. An injury to Meg Morris opened up a temporary job at right back.

FIFA officials arrested on corruption charges
‘Win or else’ for USWNT, which is fine with them