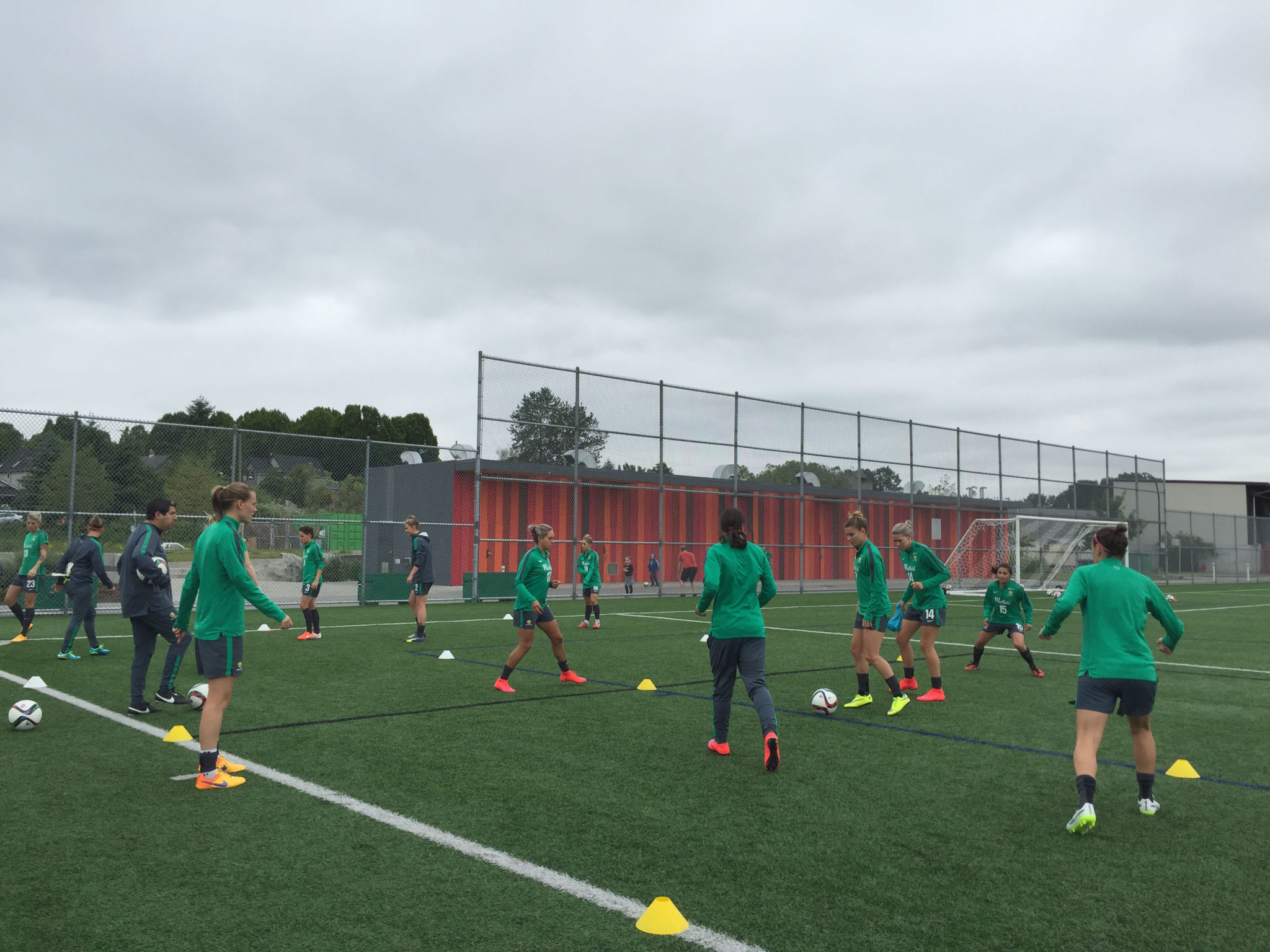 Australia trains in Vancouver ahead of the World Cup. (Photo Copyright Harjeet Johal for The Equalizer)

VANCOUVER, British Columbia – Coffee was in abundance for the Australian women’s national team by the time it landed in Canada.

Australia arrived in Vancouver on Saturday to prepare for the 2015 FIFA Women’s World Cup. The Matildas conquered a 15-hour flight from Sydney to Vancouver.

Coach Alen Stajcic scheduled an open practice on Sunday morning at Trillium Park in Vancouver. After some light jogging, and stretching. Australia worked on give-and-go drills, free time, as well as fitness while trying to adjust their body clocks to the Pacific time zone.

It’s vital that Australia uses its time in Vancouver wisely as they face competition in a challenging Group D. The Matildas will open up against the United States on June 8 in Winnipeg, Manitoba. The ‘Group of Death’ will also see Australia take the Super Falcons of Nigeria on June 12 in Winnipeg. A crucial encounter with Pia Sundhage and 5th ranked Sweden awaits in a final group match on June 16 in Edmonton, Alberta.

Australia is in for an immense battle to survive what’s being called the toughest group on paper at the World Cup. Players like Laura Alleway have a different thought process when tasked with breaking down Australia’s opponents.

“I think we’ve come into this group with a really positive attitude,” Alleway said. “It’s hard. When we got the draw we thought it was going to be a big mission, basically. We’ve been training really hard and we’ve prepared really well. We’ve had four months pretty much in each others back pockets and I think we’re coming into it with a quite positivity.”

Caitlin Foord knows the World Cup is going to be a tough competition.

“It’s obviously a strong group, we just go into it a bit more prepared the best we can,” Foord said. “We know every game in the World Cup is going to be tough. You have to win, to win the World Cup. The harder, the better at the start.” 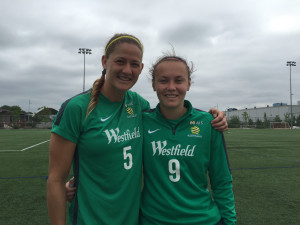 Australia is quite comfortable taking on a role as an underdog. The No. 10 ranked Australians feel like they’ve come into the tournament with something to prove, with a few teams they wouldn’t mind taking down a peg. Foord made her World Cup debut as a 16-year-old player in Germany four years ago. She remembers all too well who eliminated Australia in during the quarter-finals in Augsburg, Germany.

“I think we’ll being going in as underdogs,” Foord said. “We’ve never beat the U.S. before and Sweden knocked us out of the last World Cup. We like being an underdog, so that’s alright. If we can knock of the U.S. and Sweden, why can’t we win it. I’m happy with the group to be honest. We want to win the World Cup. They’re the teams you want to play to win it.”

Alleway will also be playing in her second World Cup. The 25-year-old has confidence in herself, teammates and coaching staff. Not matter what the outside noise may be, Alleway is determined to help propel the Matildas. Team expectations remain high and Alleway wouldn’t have it any other way.

“I think the Aussies kind of love the underdog, so to a degree yes. I think in our own mindsets we believe that we can do it and I think that we have to believe in us,” she said. “There’s no point in taking the field, you know what I mean. I think the Australians back home will see us as the underdogs and most of the world will. We kind of take that as a good thing and I suppose have less expectations from around the world, but we have super high expectations of ourselves.”

The 5-foot-10-inch centerback will be deployed to try to stop some of the best strikers in the game. Alex Morgan, Abby Wambach and Lotta Schelin have the ability to completely take over a match and change the outcome in a blink of an eye. Nigeria’s Asisat Oshoala just won BBC Women’s World Footballer of the Year. Alleway relishes the chance to go up against Wambach, the all-time leading scorer, something she’s done before.

“Actually, a few years ago I came up against Abby and loved it because finally I came up against someone who was just as big as I was,” Alleway said. “I wasn’t scared to put my body in, because I know that she’s just as strong as I am. Really, it makes me rise to the challenge and I kind of love it.”

The stands of Investors Group Field will most likely be full of supporters backing the red, white, and blue. The United States is a lot closer to Manitoba, Canada, than the ‘Land Down Under.’ U.S. Soccer supporters have purchased tickets in droves to see their favorite players and team. It’s quite possible that this could feel like an away match for Australia, but Foord is hoping to see at least some Australia fans.

“I think that first game, there’s a lot of U.S. fans that have the tickets,” she said. “We will be very happy and excited to have the few Aussies we have there so they can get behind us. It will definitely help us during the game.”

Alleway, a current Brisbane Roar player, knows that the majority of Australia supporters will be back home watching the World Cup on television.

Much has been made of the current weather in Canada. Cameroon took longer than expected to adjust to the 70-degree weather in Vancouver last week. It might be winter in Australia, but the Aussies love their sunshine and are feeling a bit out of sorts with the cooler climate in Vancouver. Alleway is hoping the weather warms up soon.

“When we got here (Saturday) we were surprised it was as cold as it was, but I think the Canadians were pretty confident that it was going to warm up.”

Foord has applied her talents in the NWSL with Sky Blue FC, so the weather change should not come as a huge surprise. The young and speedy winger seems content with the weather thus far.

“This weather is alright at the moment,” she said. I”f it stays like that, at least it won’t be too bad. I think anything colder, not many of us would like that. We don’t really get too cold in Australia.”

Notes: Australia will hold an open practice on Tuesday, May 26 and Monday June 1 in Vancouver at Trillium Park 10:00 – 12:00pm local time.