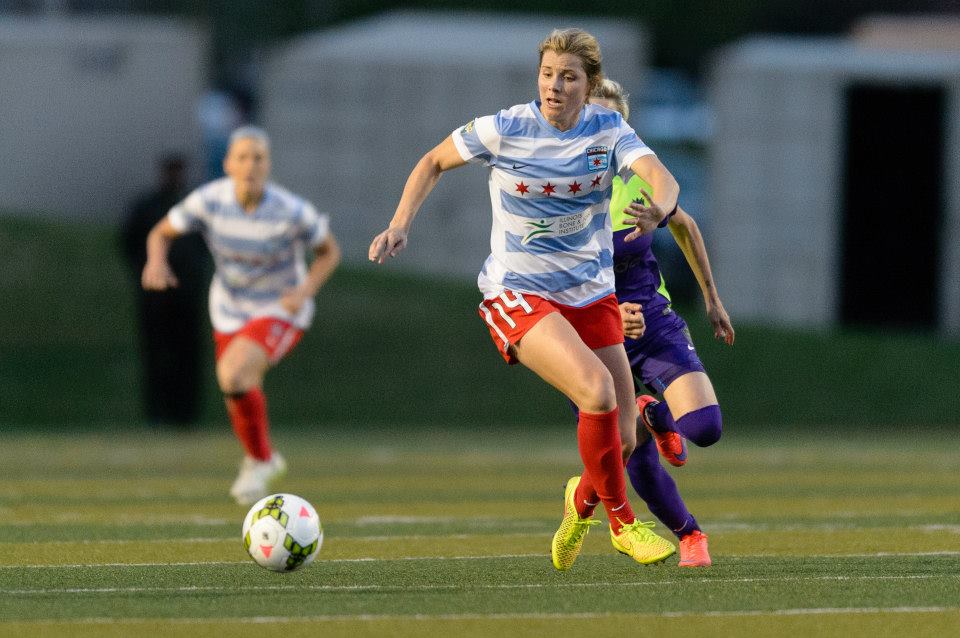 Steady pouring rain and a nearly two-hour weather delay wasn’t enough to slow down the Chicago Red Stars, who defeated FC Kansas City, 2-1 on Saturday to remain unbeaten through the first six matches of the NWSL season.

Red Stars rookie Sofia Huerta scored her league-leading fifth goal — all in the last three games — and defender Taryn Hemmings tallied the late winner. All three goals in the match were scored on corner kicks.

Kansas City defender Amy LePeilbet’s equalizing header in the 67th minute looked like it would give the third-place Blues a share of the points against the leaders. Erika Tymrak found the head of LePeilbet off a corner kick. LePeilbet flicked the ball on past Chicago goalkeeper Michelle Dalton, scoring a goal that eluded the home side for most of the night.

But Hemmings cleaned up a loose ball in the box in the 82nd minute to earn Chicago its fourth victory of the season. Michelle Lomnicki’s header rang the post and bounced across the goal line, where Hemmings made sure there wasn’t any doubt about the ball crossing the line.

Huerta scored in the 33rd minute, one-timing the ball off a corner kick from Vanessa DiBernardo. The win keeps Chicago (4-0-2, 14 pts.) unbeaten and atop the table. The Red Stars made the most of their opportunities, scoring in their first truly threatening sequence of the evening after a couple of fortuitous chances for FC Kansas City.

Kansas City, meanwhile, was wasteful. Forward Sarah Hagen had several opportunities on each side of halftime, but couldn’t put anything on frame.

Hagen’s hustle nearly led to an early goal for FC Kansas City. The 25-year-old striker quickly closed ground on Dalton and slid to block Dalton’s clearance. The ball deflected ball toward net and it skipped off the post and out of bounds for a goal kick.

Lightning nearly struck twice in the 28th minute, when Liz Bogus similarly pressured Michelle Lomnicki and deflected the ball back toward goal. Dalton had to stay attentive to keep the ball from dropping down past the goal line.

But it was Chicago who would strike first. Huerta scored on a one-time effort of Vanessa DiBernardo’s out-swinging corner kick. It was the second successive corner kick for Chicago after Arin Gilliland’s cross from the left flank found Jen Hoy and forced Nicole Barnhart into a big save.

Hagen should have equalized in the 53rd minute, sending a one-time effort wide of goal from six yards out. Three minutes later, Hagen’s shot at the back post missed the frame from close range.

Chicago’s win combined with Portland’s loss to Houston on Saturday means the Red Stars lead both Washington and Kansas City by 4 pts. each.

Saturday’s match kicked off almost two hours later than scheduled due to thunderstorms in the Kansas City area. A steady, pouring rain maintained its presence throughout the match.