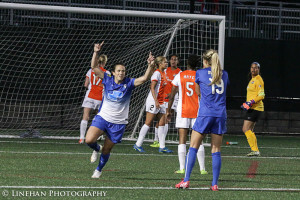 Stephanie McCaffrey scored the equalizer for the Breakers against Sky Blue on Friday. (Photo Copyright Clark Linehan for The Equalizer)

There was no stoppage-time magic this weekend at Soldiers Field Soccer Stadium as the Boston Breakers and Sky Blue FC settled for a 1-1 draw before 1,861 on Leslie Osborne Night on Friday. The former Breaker had her No. 12 retired at halftime.

The result keeps Boston (2-3-1) undefeated at home, but will have to go down as a missed opportunity with Sky Blue missing more of their regular roster due to World Cup preparation. The Breakers can likely thank their poor start for the dropped points; Sky Blue (1-3-3) dominated the opening 20 minutes and was rewarded with a goal when a turnover in midfield allowed Katy Freels to roam 40 yards with the ball and hammer a left-footed shot from 25 yards out over Boston goalkeeper Jami Kranich in the 8th minute. It was her third goal of the season.

Nadia Nadim had a couple of other chances to extend the lead, but the Breakers got the wake-up call midway through the first half and threatened through Kristie Mewis and Rafinha, but still only managed one shot on goal in the first half as Sky Blue kept its 1-0 lead at the break.

But it was coming for Boston. In the 51st minute, Mewis – who has nearly doubled up everyone in NWSL in shots attempted this season – was denied from close range after a beautiful Katie Schoepfer pass played her in. The Breakers then got three chances in succession in a minute, with Mewis shooting high from the top of the box on the first, Morgan Marlborough being robbed by Cameron from 10 yards out on a breakaway, and finally Stephanie McCaffrey leveling the game in the 60th minute. Lauren Lazo played what looked like a harmless ball into the box, but Cameron’s punch didn’t go as far as she would have liked and McCaffrey volleyed it into the open net for her second goal of the campaign, and the second straight game the Breakers have scored with the keeper off her line.

It was Sky Blue who had the best chances in the game’s final minutes, the best coming off the foot of substitute Meg Morris just seconds after she came on in the 78th minute. Nadim, who played very well in the final 15 minutes but missed a couple of chances of her own, ran through the middle and found Morris, whose thundering drive hit the bottom of the crossbar and appeared to cross the line before bouncing out, although replays were far from conclusive.

There were no cards handed out in an extremely clean contest. Both teams face key home games next weekend: Boston continues its homestand Saturday night against defending champs FC Kansas City, while Sky Blue hosts Houston next Sunday afternoon. With the regular season only 20 games this year, both teams could use three points to possibly inject themselves into playoff contention.