Seabrook a defender of country, and in soccer 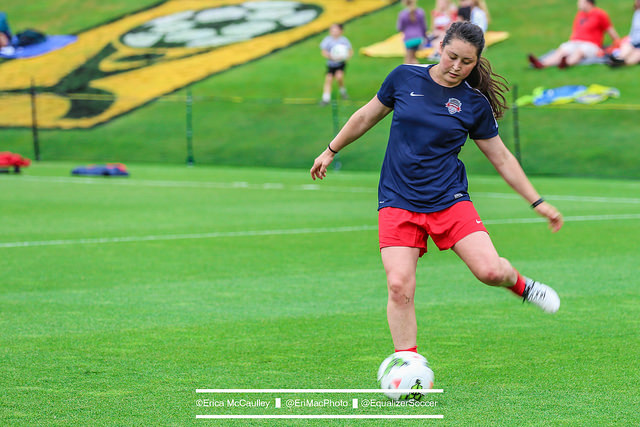 Jade Seabrook will spend her final free months with the Washington Spirit before serving her time with the Navy. She graduates on Friday. (Photo Copyright Erica McCaulley for The Equalizer)

Jade Seabrook is a defender in more ways than one. As a center back, she helps keep the ball out of the back of the net and soon she’ll be a Marine Corps officer, charged with defending her country.

With final World Cup preparations underway, amateurs are playing a large role in National Women’s Soccer League, filling out rosters and providing numbers for practices sessions. Most amateurs play hoping to earn a contract, either in the NWSL or abroad. Others balance practice with full-time jobs. Of all the amateurs in the NWSL, perhaps no situation is as unique as Seabrook’s.

Seabrook will graduate from the Naval Academy this Friday. Since NWSL preseason began, she’s been combining her rigorous demands of the academy with making which training sessions she could with the Washington Spirit.

The defender said Spirit head coach Mark Parsons has been understanding of her demanding schedule.

“He said just make what you can and once you’re kind of done with school and obligations, come back and train with us,” Seabrook said. “Every time I come back it’s kind of like a family reunion everyone is really excited to see me. It’s a great atmosphere.”

[GORDON: After two years of injuries, midfielder Miller returns to field for Spirit]

The Spirit will see more of Seabrook now that she’ll get about a month of leave following graduation. While a lot of her Naval Academy classmates are going to Europe or traveling the country, Seabrook is content spending that time training with the Spirit. 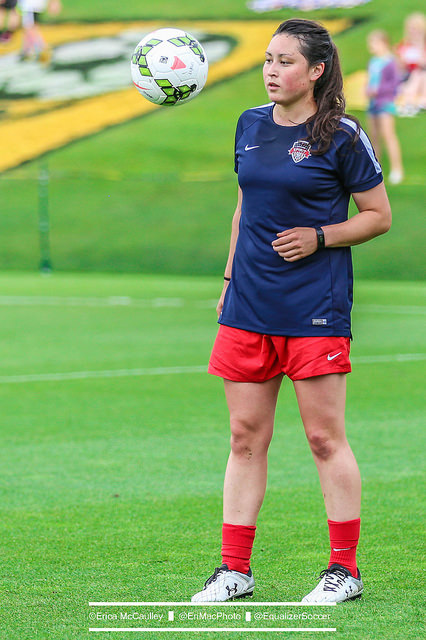 Jade Seabrook says that even making a travel roster for the Spirit would be a dream come true. (Photo Copyright Erica McCaulley for The Equalizer)

After her leave period ends, Seabrook’s work work at the Naval Academy until she leaves for the Basic School in September, which is essentially boot camp for Marine Corps officers. That will end her soccer playing days, at least for the next five years as she carries out her service commitment. Right now, she’s not sure if she’ll just serve five years or if she’ll stay in for 20 years — a.k.a. “the long haul” — and make it her career.

Graduates from the Naval Academy leave for the six-month training in three different waves, starting in June. Attendees are permitted to submit preferences as to which class they are assigned. Seabrook requested the last one, explaining that she wanted to continuing playing soccer. The Naval Academy was understanding and assigned her to the last one. Until she leaves, she’ll get to as many training sessions that she can.

Seabrook has enjoyed the time she’s had with the Spirit thus far.

“The team is awesome to be honest and regardless of whether you’re a reserve player or you start every game you get treated absolutely the same,” she said. “You’re held to the same standards. You’re expected to do things that the starters would do. You’re expected to play at the same workrate as if you were going to start and it’s a really cool atmosphere.”

Parsons said during preseason that the team enjoyed having her around whenever she was available whether it was for a training session, meal or a team bonding activity.

Parsons called Seabrook an “awesome person” and a “really good player,” adding, “she helps us become a better team when she’s here. Now we get her full-time and we look forward to her training.”

With forward Francisca Ordega off to train with Nigeria for the World Cup, Parsons can now call-up as many as three amateurs for matches. He stated that Seabrook is an option for one of the call-ups.

When asked about the potential of being a part of the Spirit’s 18-player roster for a game, Seabrook gave a somewhat surprising answer for someone who’s survived the mental and physical crucible that is the Naval Academy.

“That would be cool. I’m not going to lie, it would be absolutely nerve wracking because even being on the same field with these guys is just humbling to be honest,” she admitted. “Stepping on the field or even even traveling with the team would be a dream come true probably.”

Luckily, Seabrook has a history of thriving in uncomfortable positions. She came into college as a defensive midfielder and after the team lost one of its center backs to graduation, coach Carin Gabarra penciled in Seabrook at center back during a spring game. After the spring game, Seabrook was told she should get use to playing back there.

The move proved fruitful as Seabrook earned Patriot League Defender of the Year the next three years, along with two All-American honors, logging 1600-plus minutes in each of her final three seasons.

“For me it’s just awesome opportunity to play just continue playing soccer to be honest,” she said. “It’s an awesome opportunity, just a great experience to get to know new people and sort of play outside of your comfort zone I would say.”

Seabrook hopes to become a better soccer player as well and says she’s grown exponentially as a player just being in the professional environment.

“I don’t know how she does it with the amount of stuff they have up there at the academy and all the work that they do,” Miller said. “The fact that she has the energy to come down here and practice with us and be here with us whenever she can, make that commitment too is just something. I just respect her so much. I think it’s incredible.”

Surely, fans of Washington Spirit and the NWSL do as well.