Morgan named among most marketable athletes 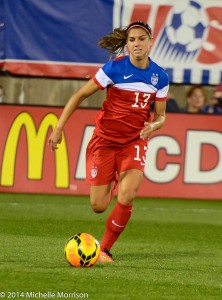 Alex Morgan is one of the world’s most marketable athletes, according to SportsPro Magazine. (Photo Courtesy Michelle Morrison, The Soccer Desk)

Alex Morgan is the 19th most marketable athlete in the world, according to SportsPro Magazine’s annual rankings.

Twenty-one-year-old tennis star Eugenie Bouchard topped the list, with Brazil soccer star Neymar coming in second. Tennis and soccer accounted for the most players on the 50-player list, with six each.

Organizers say the list measures marketing potential across the next three years. Editors of the magazine say “there is a woman at the head of the list for the first time – picked on potential, rather than her most recent results, but with the promise of developing into a global figure in sport and the media.”

Morgan is down five spots from last year’s No. 14 ranking. She is one of 12 women on the list. Bouchard is the first woman to top the list in the six editions of it.

Athletes are ranked according to their marketing potential over a three-year period from this summer in the following categories: value for money, age, home market, charisma, willingness to be marketed and crossover appeal.