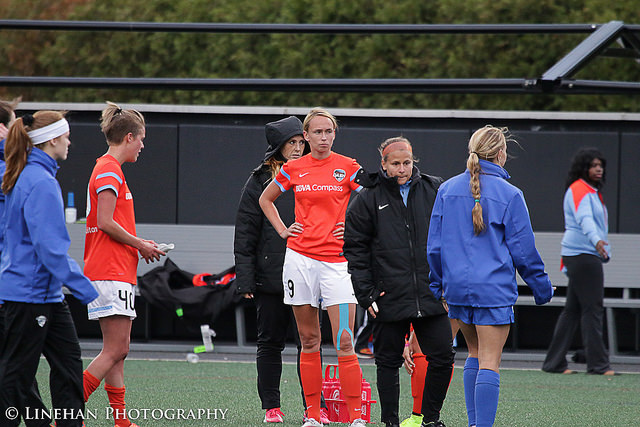 Stephanie Roche has been released by Houston. (Photo Copyright Clark Linehan for The Equalizer)

Stephanie Roche’s time in Houston is over after 24 minutes of action.

The 2014 FIFA Puskas Award runner-up was waived by the Dash on Wednesday to make room for a pair of international signings. She appeared off the bench in two matches. Houston added Australian defender Ellie Brush and Brazilian defender Camila to bolster a thin back line.

Houston head coach Randy Waldrum was optimistic about Roche’s potential in the league when speaking to The Equalizer in early May, but ultimately the Dash have more immediate needs on defense that could be used with the international slots.

“I really would have liked to have given her the time to be with us a season because I think she was getting better and better and adapting,” Waldrum told KeeperNotes.com. “Unfortunately, as I told her, as bad as we have been defensively, we had to make some moves. Two internationals, and the international spots being so critical, we had to let somebody go.”

Roche became famous for her spectacular goal for amateur Irish club Peamount United in October 2013. She was the first female finalist for the FIFA Puskas Award, given annually to the scorer of the best goal in the world and voted on by fans.

Brush has appeared twice for Australia but will not join the Matildas at the World Cup next month. She joins from Canberra United in the Westfield W-League, where she has played since 2008, winning championships in 2012 and 2015.

Camila is a 20-year-old who most recently featured for Brazil at the U-20 Women’s World Cup in Canada last year.

To make further room for the signings, defender Stephanie Ochs has been placed on the season-ending injury list after undergoing surgery to repair a torn ACL.