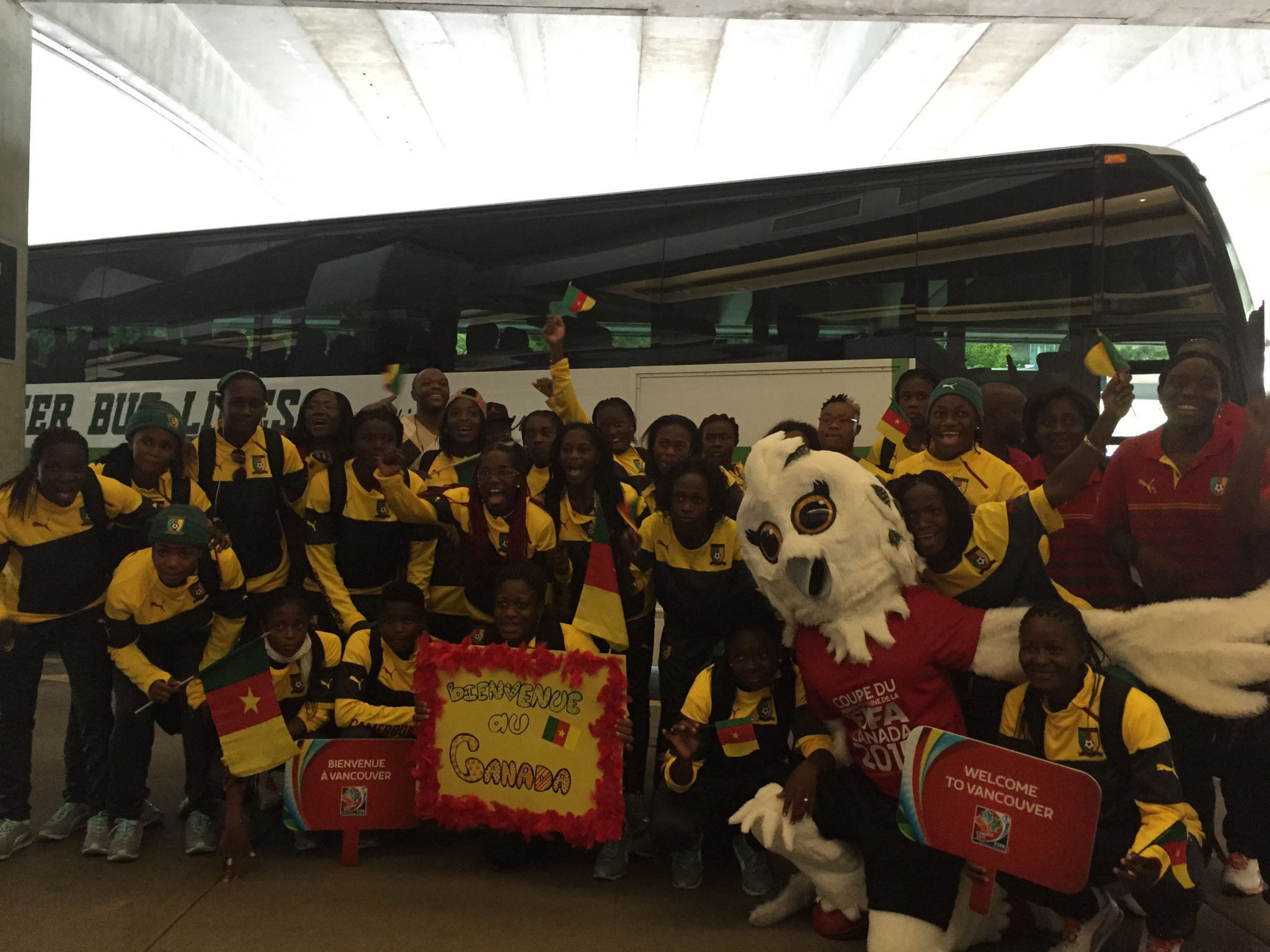 Cameroon is the first of 24 World Cup teams to arrive in Canada. (Photo Copyright Harjeet Johal for The Equalizer)

VANCOUVER, British Columbia – The race is on and Cameroon is the first country to arrive in Canada for the 2015 FIFA Women’s World Cup. Not only have the Lionesses started acclimating themselves to their new surroundings, but coach Enow Ngachu has also setup a string of friendlies against local club teams.

Cameroon landed at Vancouver International Airport on Friday, just over three weeks before they play a Group C opening fixture against Ecuador at BC Place. The purpose for Cameroon’s early arrival is acclimation to the weather and to play preparation matches against girls soccer clubs.

The 53rd-ranked Cameroon national team will face tough competition in the World Cup that includes defending champion Japan and an upstart and confident Switzerland team. Ecuador is ranked 48th and presents an opponent that is somewhat closer to Cameroon on paper. Japan and Switzerland will be the favorites to top Group C while Cameroon and Ecuador will both be underdogs.

Defender Cathy Bou Jouh is confident Cameroon will come out and play their absolute best.

“It’s a tough group but I think we are going to do our best,” she said.

Heading into the World Cup, Ngachu wants to see if his team can progress further than what took place at the 2012 London Olympics. During that tournament, Cameroon fell to Brazil (5-0), Great Britain (3-0) and New Zealand (3-1). Gabrielle Onguene scored Cameroon’s lone goal as they finished last among the 12 competing teams.

Cameroon was able to get off to a fantastic start with a 3-1 win over The North Shore Girls Soccer Club on Sunday afternoon in North Vancouver. The Lionesses opened the scoring in the 32nd minute thanks to a clever flick from Ngono Mani. Cameroon added a pair of second-half goals from Bella Rose, and a beautiful back-post header from Claudine Meffometou.

Cameroon dominated the match and had no problems controlling the play and possessing the ball against the NSGSC. The backline for the Lionesses was not under any constant pressure, but did give up a late goal to Courtney Hammerling in the 85th minute. Ngachu was happy to have won the match, but he still seeks much more improvement from his team going forward.

“I think the necessity was not to win the game,” he said. “We wanted to access our level of preparedness. We discovered that we still have some weaknesses. We need to work and improve upon that so we are ready for the beginning of the World Cup. I’m satisfied because we won the game, but we need to work very hard.” 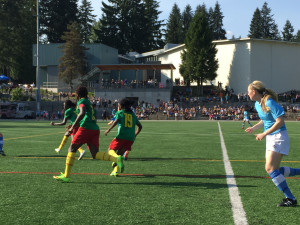 Cameroon in action on Sunday. (Photo Coypright Harjeet Johal for The Equalizer)

Scoring has been a pressing issue for Cameroon, but they should get some help in that department. Strikers Gaelle Enganamouit (Eskilstuna United) and Ajara Njoya (Western New York Flash) will join their teammates in Vancouver after club fixtures later this week. The Cameroon delegation is also expecting a pair of reinforcements who play club football in Denmark and Switzerland. Once the added players join up with Cameroon in the next 7-10 days, Ngachu will have a better idea of how his team looks at full strength. Thus far Cameroon and Ngachu are enjoying Canada.

“We want to use this opportunity to really appreciate what the Canadians are doing for the Cameroon national team and that also means not to disappoint them,” he said. “We are appreciating the environment and even the hotel where my players are. We are satisfied with everything.”

Cameroon will take on the North Shore Girls Soccer Club in a rematch next Sunday at the same venue. The NSGSC has decided to raise money to help support the Cameroon national team with costs they might encounter during and leading up to the FIFA Women’s World Cup. Ngachu was taken back upon learning of the generosity Canadians have shown to his team.

“Wow,” Ngachu said, pausing to take in the news. “I think it will prove that the Canadians are behind the Cameroon national team. We should try by all possible means to make use of that money and also not to disappoint those who contributed the money to encourage these young ladies.”

One of the big adjustments for Cameroon is weather. The sun shone brightly on Sunday afternoon, but it was still a shock to see many of the Cameroon delegation and substitutes sporting giant puffy jackets on the sidelines. The mid-70s weather might be a minor heat wave for Vancouver, but it’s quite chilly for Cameroon.

“No today it wasn’t cold,” Ngachu said, laughing. “We know Canada, especially Vancouver is very cold and actually today was very hot. You know, we don’t want to be surprised. We have another game in the evening and I’m quite sure it’s going to be cold. We are from Africa and it’s warmer there than here. You have to understand that even now we are still feeling the cold. We need to adapt ourselves, that’s the reason why we came here very early.”

Cameroon’s players have a difference of opinion when it comes to the cooler Canadian climate.

“We don’t care about the weather,” Bou Jouh said.

Rita Wanki spent the duration of the match against the NSGSC sporting a giant warm looking jacket. While she and her teammates are learning to adjust to Canada they can’t shake the changing weather.

“We like it here even though it’s cold,” she said.

NSGSC head coach and technical director Jesse Symons shared his thoughts on the atmosphere of the match and overall objective of hosting Cameroon for a pair of friendlies leading up to the World Cup.

“I thought it was fantastic. There’s so many young girls out here to watch the match. The objective of the game was to get excitement for the Women’s World Cup, coming up June 6 and onward. Yeah it was fantastic, great atmosphere. The Cameroon team was first class. Moving the ball around well and I really look forward to seeing them kickoff June 8 against Ecuador.”

“For me I think we played very well,” said Wanki, who watched from the sidelines on Sunday. “Of course we won the match even though it was not easy. We had the opportunity to score [and] we did it.”

Australia will be the second World Cup team to arrive in Canada. The Matildas will touch down in Vancouver on Saturday, May 23, after playing a friendly against Vietnam on Thursday, May 21.