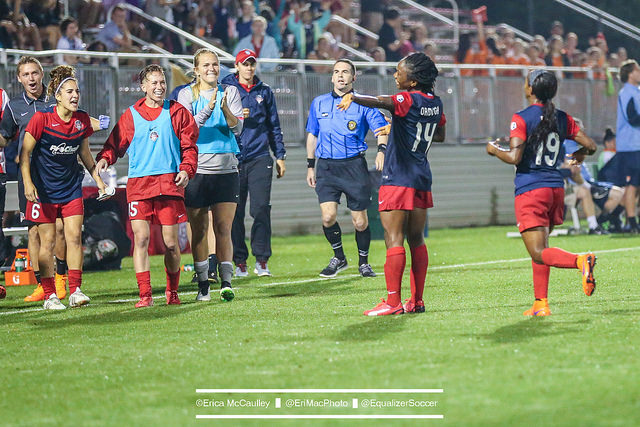 BOYDS, Md. — A dramatic stoppage time goal by Francisca Ordega lifted the Washington Spirit over the visiting Sky Blue FC on Saturday night at the Maryland SoccerPlex. The goal, which came in the 92nd minute, marked the second game of the night that was decided by a stoppage-time strike.

Ordega’s goal made for quite the send-off for the Nigerian forward; the match was the last she’ll play for the Spirit until after the World Cup. Scoring the game-winning goal did come at a price for the forward as she injured her ankle after a sliding tackle by Cami Levin. She had to come off the field for a few minutes but was able to continue with some noticeable discomfort.

“I have to do [it] because it’s my last game before the World Cup,” Ordega said about playing through the injury. “ So I just have to put my head down and make the sacrifice.”

Earlier in the night, Kristie Mewis also scored in stoppage time to lift the Boston Breakers past Portland Thorns FC, 1-0.

Ordega’s goal was one of the few bright spots for the Spirit in the match. The visitors were the much more dangerous team after the 20-minute mark. The Spirit did got two early opportunities back-to-back in the 4th minute on a couple of set pieces.

On the first chance, Christine Nairn sent in a corner that her fellow Penn State alumna Whitney Church nearly headed in, but Brittany Cameron was able to punch it out for a corner kick. The ensuing corner was taken by Angela Salem and her attempt found Joanna Lohman’s head. The ball hit off the woodwork and out, thus ending the Spirit attack.

Sky Blue dominated much of the remainder of the game. Despite notching 21 shots total and nine on frame, Sky Blue failed find the back of the net.

Sarah Killion, Sky Blue’s 2015 first-round draft pick was a late scratch for the game due to knee pain which forced head coach Jim Gabarra to be more direct during the course of the game than he would have otherwise. Gabarra inserted Kim DeCesare into the starting lineup and she took the task of winning the long balls the team played.

Killion sitting out wasn’t the only surprising part of Sky Blue’s lineup, as forward Maya Hayes was inserted as an outside back and given the task of defending Crystal Dunn. Gabarra appreciated Hayes’ efforts in a new position, calling it, “one of the best performances at right back all season.”

A number of Sky Blue’s most dangerous chances came off defensive miscues by the Spirit. Three times in the first half, goalkeeper Kelsey Wys was forced to make saves to keep the visitors off the score sheet because of poor giveaways.

One of Sky Blue’s more dangerous attempts in the first half came when a ball was played over the top for Nadia Nadim in the 23rd minute. Nadim was in close proximity to Wys, who was the only Spirit player she had left to beat. Nadim couldn’t get enough on the ball and Wys was able to save it.

In the second half, Sky Blue attacked the Spirit goal repeatedly using a very direct style. It seemed like it was only a matter of time before the Spirit’s defense would break under the barrage. Nadim oft found herself in and around the Spirit’s defensive third but the Spirit somehow managed to thwart her efforts.

Some of Nadim’s best chances included a close-range shot that required a sliding block from Spirit defender Estelle Johnson and an attempted chip in the 62nd minute that Wys was able to snuff out.

Despite losing the match, Gabarra was quick to point out the positives in his team’s performance.

“That’s the best we’ve played so far. That’s the most chances we’ve created,” he said.

“I couldn’t make more subs because I couldn’t decide who deserved to come off more because it was bad. Really bad,” Parsons said when asked why the team didn’t use it’s final substitution.

Parsons did praise keeper Wys’ performance and while admitting that only a few players had a good night. The team’s lackluster performance had Parsons already thinking about what he had to address in practice next week, two-thirds of the way through the game.

Sky Blue generated some opportunities, but sill hasn’t scored from the run of play in 298 minutes. Washington’s performance generated a lot of questions. The Spirit have swept the season series against Sky Blue and it will be interesting to see which way the sides trend after this Saturday’s match.

The Spirit will head to Rochester, N.Y., next Saturday to take on the Western New York Flash. Meanwhile, Sky Blue will remain idle until they face Houston on May 31st.