Two years later, Miller back on field for Spirit

Two years later, Caroline Miller is back on the field in the NWSL. (Photo Copyright Erica McCaulley for The Equalizer)

BOYDS, Md. — For the Spirit’s Caroline Miller, the last two years have been a horrible kind of deja va, as a series of ankle injuries have kept the 23-year-old off the pitch for the Washington Spirit.

In May 2013, the forward suffered an ankle injury, putting an end to her rookie season after a month. The Maryland native would go almost two years before appearing again in a professional match, seeing action in the Spirit’s draw against Portland last Saturday.

Miller’s initial injury was misdiagnosed as a stress fracture in her foot, but she had actually blown out her ankle. The injury started a roller-coaster ride that would end with three surgeries in total.

While Miller didn’t see the field, she was still very much a part of the team.

“Throughout these past seasons, she’s been in and around the team more than people probably know,” Spirit midfielder Tori Huster recalled during preseason. “She’s always been a positive vibe for us, a positive person for us, even when things didn’t go right the first season and when they were a little bit wrong last season.”

Twice Miller had surgery, began rehab, only to find that after making progress, she had to stop, go back to square one and start all over again. The situation has been taxing for the University of Virginia product and although she did what she could to support her teammates, she didn’t realize that had been a positive influence for the team.

“It’s been miserable. I don’t know any other way to put it,” Miller bluntly stated during preseason. “It’s like I’d have surgery, rehab come back, think it was good and then they’d say all over again, ‘No, you’ve got to have something done again.’ I think the third time was definitely the worst when they said it because I’d come back again I was doing so well in practice and then it just started acting up again and they were like ‘Oh yeah, you’ve got to have surgery again”, so that was kind of crushing.’”

Last season, Miller received support and motivation from then teammate, Jordan Angeli, currently with the Western New York Flash. Angeli made an inspiring return to professional game after a three-year hiatus from her third ACL injury.

“Jordan is incredible,” Miller said in March. “I looked at my injury and was like if she can do this, I can do this. It’s not that bad. She’s just a positive person and you love being around her… When I was really down, she was so supportive and she gave me so much advice.” 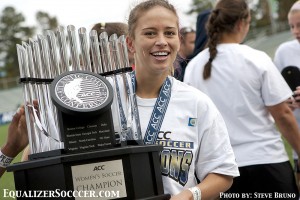 Caroline Miller was an All-American at Virginia before going pro and suffering injury setbacks. (Photo copyright Steve Bruno for EqualizerSoccer.com)

Despite setbacks, Miller charged on, aiming to play the sport she loves again. While Miller toiled away in rehab and recovery, a number of other NWSL players hung up their boots.

When asked why she was attempting a comeback given the exodus, Miller responded with a bit of humor before revealing her real reason.

“So I don’t have to grow up and get a real job,” she quipped. “No, I’m just kidding. I just love playing and it’s one of those things where I wanted to give it one last shot. I wasn’t ready to just be done and let this ankle injury be the reason I call it quits. So I just wanted to give it one more shot…”

After all those hours of rehab and recovery, Miller was finally able to get another shot on the soccer field.

“It was awesome.” Miller said this week about her return. “Portland has such an incredible atmosphere, so that being the first game was really, really cool. It was just great to be back on the field with the girls and playing and just enjoying it again, finally.”

Albeit Saturday’s game was only a cameo appearance, it may not be long before Miller is reminding people why she was a MAC Hermann Trophy finalist in 2012. With a wickedly powerful left foot and the ability turn on a dime, her return to the pitch comes at a time when the Spirit as the team could use some offensive reinforcements.

Nigerian forward Francisca Ordega, who has been a revelation for the team, will depart for the World Cup after Saturday’s match against Sky Blue. Argentinian Estefania Banini is also unavailable for Washington after suffering a season ending knee injury.

“It’s good to see,” Spirit head coach Mark Parsons said this week, regarding Miller’s return. “She’s been working really hard. She’s very disciplined. She’s had a couple of small, tiny strains and injuries as she comes back but that’s expected after two years out. She’s ready to go, full go now. It’s just exciting to have her as an option.”

On Saturday, Miller could make her first appearance at the Maryland SoccerPlex, about 30 minutes from where she grew up and first fell in love with the game. While it’s hard to know what the future holds for Miller, she is back to enjoying the game she loves after experiencing such a tumultuous two years.