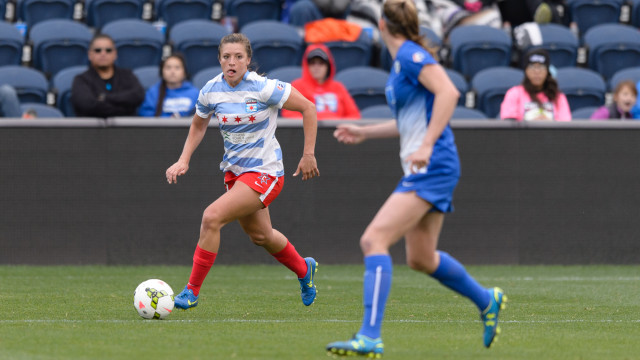 Rookie Sofia Huerta scored netted her second brace in as many games to rally the Chicago Red Stars to a 2-2 road draw against the Houston Dash on Friday at BBVA Compass Stadium, keeping the Red Stars unbeaten and atop the NWSL.

Huerta scored the late equalizer in the 81st minute effort on a left-footed shot after a nifty Cruyff move with her right foot to get space inside the box. Houston led 2-0 at one point in the second half.

Chicago is now unbeaten (3-0-2, 11 pts.) through five matches and alone atop the NWSL standings ahead of Saturday’s matches. Portland (2-0-2, 8 pts.) is the only other remaining unbeaten team; the Thorns play away against the Boston Breakers on Saturday.

Friday brought a promising start for the Dash. Brittany Bock returned to the field for the first time since tearing her ACL in the opening minutes of the season last year and she nearly scored right away. Debutante Jen LaPonte sent a deep cross toward the center of the box in the 11th minute of the match and Bock got on the end of it, flicking the ball over on-rushing goalkeeper Michele Dalton but just over the crossbar and onto the top of the net.

Houston struck first in the 28th minute, when Rachael Axon stepped up and buried a penalty kick past Dalton. Kealia Ohai was brought down in the box by rookie Red Stars defender Arin Gilliland, causing referee Randall Kelly to point to the spot. The English midfielder Axon buried the kick for her first NWSL goal.

Ohai scored the Dash’s second goal on a brilliant counterattack in the 57th minute, beating Dalton 1-v-1 in the open field with a calmly placed shot to Dalton’s right to give Houston a 2-0 lead. Jess McDonald started the counterattack by finding Melissa Henderson, who played a streaking Ohai into space.

But the lead lasted less than three minutes. Huerta scored her first goal of the night in the 60th minute, burying Jen Hoy’s lofted through ball low past Dash goalkeeper Bianca Henninger. Huerta’s second goal cost the Dash more points late, a worrisome trend for the second-year club which now has 5 points from five matches.

“We’re disappointed,” Ohai said postgame on the Dash broadcast. “We’ve done this three times now where we’ve had a game, we can get three points out of it and we let it go right at the end. So it’s not good enough and it’s not good enough for our fans, who come out and support us at home. So we hope to come back and fix that.”

Ohai’s goal came after consecutive misses by the Red Stars from inside the six-yard box. Rachel Quon missed a tap-in volley at the back post in the 56th minute and Hoy followed up a minute later by blasting her shot over the bar. Alyssa Mautz created both opportunities with service from the right flank.

Huerta scored twice last week in a 3-0 win over Boston. They were the first professional goals of the former Santa Clara forward’s career after being drafted No. 11 overall in the 2015 NWSL Draft. Huerta is now tied with Christen Press — who is away with the United States for World Cup preparations — for the Red Stars’ lead with four goals. Press and Huerta are tied for the league lead for goals, along with Portland’s Allie Long and Washington’s Crystal Dunn.

Houston next faces consecutive road games against Portland and Sky Blue FC. This was the Red Stars’ first of four straight road matches after starting the season with a four-game homestand.

Germany loses another for WWC: Alushi pregnant
Two years later, Miller back on field for Spirit