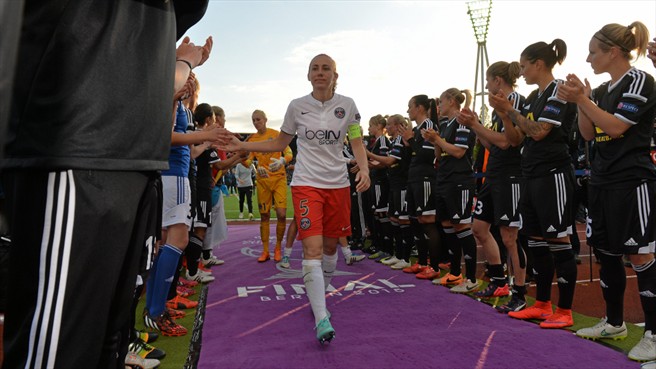 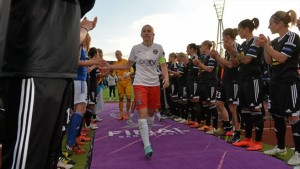 Sabrina Delannoy and PSG came up short in the UWCL final.

Paris Saint-Germain captain Sabrina Delannoy says fate was not on her team’s side on Thursday in a 2-1 loss to Frankfurt in the UEFA Women’s Champions League final.

Frankfurt won its fourth European crown thanks to a stoppage-time goal from second-half substitute Mandy Islacker. PSG midfielder Shirley Cruz was withing inches of an equalizer on the last sequence of the match, but it wasn’t meant to be for PSG in the club’s first Champions League final.

“I think we lacked some clear-headedness, they were more clear-headed than us in attack at least,” Delannoy told reporters after the match. “We managed to equalize, but then it was decided on details and it went in their favor. We could have scored from our last chance, but I think fate decided against us tonight.”

Delannoy admitted that “Frankfurt were better than us on the day,” but the agony of defeat in the final is no easier to overcome — especially giving up the winning goal in the second minute of second-half stoppage time.

“We scored one goal fewer than them,” PSG defender Annike Krahn said. “But they had more chances, so we have to congratulate Frankfurt on winning the Champions League title. But it’s bitter to concede a goal like that in the last minute.”

PSG was without several stars for the match. Caroline Seger was suspended for the match after picking up a yellow card in the second leg of the semifinal. Josephine Henning and Laura Georges also had to come off the bench for PSG, having not been full-match fit due to injury.

“Maybe you have to ask each player individually [why Paris started slowly],” she told UEFA.com. “I don’t have an answer for that, I was wondering myself. I think in the first half, after we conceded the first goal, we still managed to score an equaliser from a chance we had, which was the only one in the whole match, unfortunately. But we played OK towards the end of the first half. You shouldn’t concede a goal so close to the end of the match, but we conceded one. Frankfurt had more chances, but it’s all pretty sad that we couldn’t show what we can do.”