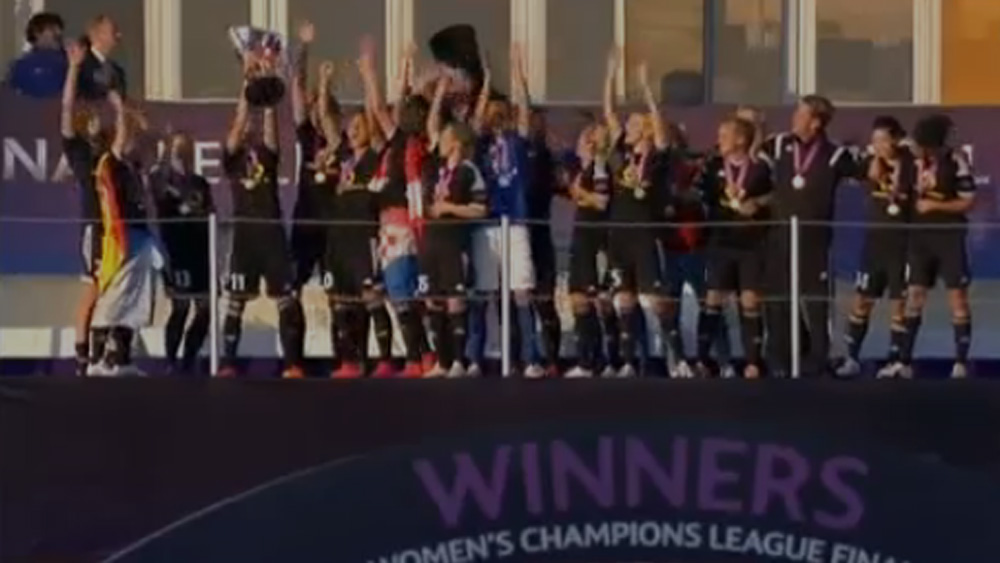 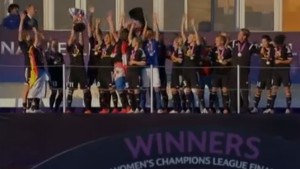 Frankfurt lifts the UWCL trophy for the fourth time after beating PSG, 2-1.

Frankfurt won the UEFA Women’s Champions League title for a record fourth time on Thursday, defeating PSG, 2-1 in Berlin behind a stoppage-time goal by Mandy Islacker.

The match looked destined to be the second-ever final to go to extra time, but Islacker’s unconventional effort in the second minute of stoppage time won the game, breaking the collective heart of PSG, which was in a Champions League final for the first time.

Dzsenifer Marozsán found space on the left flank and sent a floating cross toward the back post. PSG could only clear it to the top of the 18-yard box, where Kerstin Garefrekes won the 50-50 header and knocked the ball down to Islacker. The 26-year-old forward placed the ball with the outside of her left foot, beating PSG goalkeeper Katarzyna Kiedrzynek from 15 yards out for the match-winner.

PSG midfielder Shirley Cruz had a chance to tie the match on the final sequence of play. Cruz was wide-open at the back post after the ball skipped through a scrum of bodies in the box, but Cruz’s extended right foot came inches short of making contact with the ball from six yards out for what would have been the equalizer in the fifth minute of second-half stoppage time.

Célia Šašić gave Frankfurt the lead in the 32nd minute, precisely heading in a ball from Garefrekes to beat Kiedrzynek. The goal was Šašić’s 14th of the campaign, tying the record for most in a European season. Margrét Lára Vidarsdóttir (Valur Reykjavík) scored 14 in 2008-09 and Conny Pohlers (1. FFC Turbine Potsdam) first did it in 2004-2005. Pohlers is the all-time leading scorer in the competition with 48 goals.

But PSG answered through the air as well eight minutes later, when Marie-Laure Delie roofed her header past Frankfurt goalkeeper Desirée Schumann for the equalizer.

PSG was without midfielder Caroline Seger, who was suspended for the match after picking up a yellow card in the second leg of the semifinal. The absence of the Swedish international proved costly, though PSG nearly forced extra time. Josephine Henning and Laura Georges also had to come off the bench for PSG due to injury.

Frankfurt was coming off the weekend disappointment of missing out on the Frauen-Bundesliga title, finishing third, three points behind new holders Bayern Munich and one point behind VfL Wolfsburg, who held Frankfurt to a 1-1 draw on the final match day.

Concerning for the German national team — even more so than Frankfurt, whose season is over — is an 87th minute injury to midfielder Simone Laudehr. She exited the game after a non-contact injury following an awkward planting of her foot. Her left knee was seen wrapped in an ace bandage on the bench immediately following the incident.

Lyon remain the only French club to win the UEFA Women’s Champions League, claiming back-to-back titles in 2011 and 2012. PSG beat Lyon in the Round of 16 and eliminated previous holders Wolfsburg in the semifinals to make it to Berlin.

Wolfsburg, Potsdam and Lyon all have two UWCL titles each. No club has three titles.