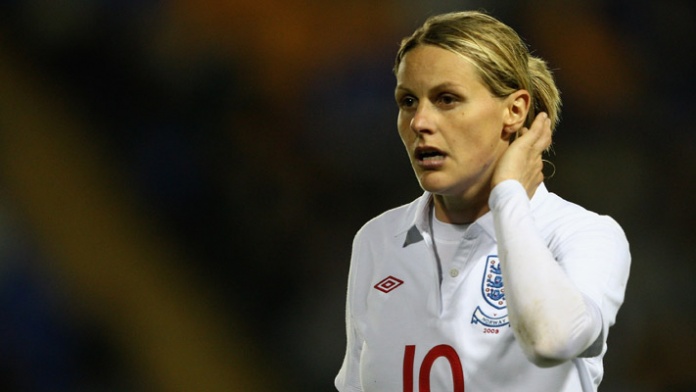 Kelly Smith has had her fair share of injuries, and her latest has the 36-year-old English forward livid.

Smith, who is England’s all-time leading scorer but retired from international soccer just ahead of this year’s World Cup, has a cast on her right leg after having surgery for three torn ligaments. She says she hopes to return in three to four months.

[MORE: Smith on why she retired  |  DiCicco: Smith among world’s best]

On Wednesday, Smith wrote an extensive post on social media berating Sunderland’s Abby Holmes for the tackle Holmes put in recently that caused Smith’s injury. Smith says the tackles could have ended her career.

“I’ve kept quiet about my injury over the past three weeks but the time is right for me to talk about it and the tackle,” she wrote.

“I have thought about what to say about this tackle but there is no hiding the fact: the tackle was malicious and designed to do one thing only – to do serious damage. I have watched the tackle twice since on video so this isn’t an emotional verdict. It was a disgraceful tackle and one fully intended to hurt me. I have had a lot of reaction from both my team-mates and others in the game and the verdict is the same: Holmes shouldn’t be playing in this league.”

A photo of the tackle at the above link shows a gruesome scene for Smith and shows that the tackle was late and nowhere near the ball.