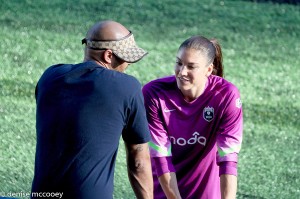 Former NFL tight end Jerramy Stevens was sentenced to 30 days in jail on Friday after pleading no contest to DUI charges in January.

Stevens, who is the husband of U.S. national team goalkeeper Hope Solo, will also be placed on probation for the four years and he will have to attend a two-year outpatient alcohol rehab program for being a repeat DUI offender.

Stevens was pulled over in January in Manhattan Beach, Calif., while driving a U.S. Soccer team van. Solo was in the passengers seat and was uncooperative with police, according to reports. The incident led to Solo being suspended from the U.S. national team for 30 days. She was reinstated to the team in late February. Solo has since written about being in a “happier place” after going to therapy.

Stevens’ arrest came one week after domestic violence charges against Solo were dropped. Solo had been accused of assaulting her half-sister and teenage nephew last June.